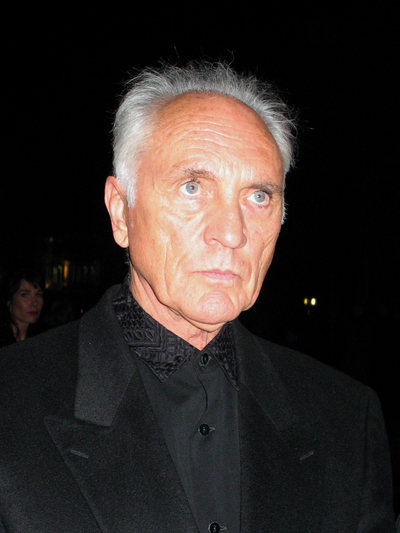 Terence Henry Stamp (born 22 July 1938) is an English actor. Since starting his acting career in 1962, he has appeared in over 60 films. His performance in the title role of Billy Budd, his film debut, earned him an Academy Award nomination for Best Supporting Actor and a BAFTA nomination for Best Newcomer.

Stamp's other major roles include butterfly collector Freddie Clegg in The Collector, archvillain General Zod in Superman and Superman II, tough guy Wilson in The Limey, Supreme Chancellor Valorum in Star Wars Episode I: The Phantom Menace, transsexual Bernadette Bassinger in The Adventures of Priscilla, Queen of the Desert, ghost antagonist Ramsley in The Haunted Mansion, Stick in Elektra, Pekwarsky in Wanted, Siegfried in Get Smart, Terrence Bundley in Yes Man, the Covenant Hierarch "Prophet of Truth" in Halo 3, and General Ludwig Beck in Valkyrie.

Stamp, the oldest of five children, was born in Stepney, London, England in 1938, the son of Ethel Esther (née Perrott) and Thomas Stamp, who was a tugboat captain. His early years were spent in Canal Road, Bow, in the East End, but later in his childhood the family moved to Plaistow, West Ham, in Essex (now London Borough of Newham in London) where he attended Plaistow County Grammar School. His father was away for long periods with the Merchant Navy and the young Stamp was mostly brought up by his mother, grandmother and aunts. He grew up idolising actor Gary Cooper after his mother took him to see Beau Geste (1939) when he was three years old. He was also inspired by the 1950s avant-garde method-trained actor James Dean.

After leaving school, Stamp worked in a variety of advertising agencies in London, working his way up to a very respectable wage. In the mid‑1950s, he also worked as an assistant to professional golfer Reg Knight at Wanstead Golf Club in East London. He describes this period of his life very positively in his 1988 autobiography Stamp Album. Deep down, he wanted to be an actor—a realisation that came when Stamp found he no longer had to serve two years' national service after being rejected for once having had treatment for his feet.

Stamp won a scholarship to train at the Webber Douglas Academy of Dramatic Art, then performed in various provincial repertory theatres, most notably in a national tour of Willis Hall’s play The Long the Short and the Tall alongside another young actor Michael Caine.

Stamp made his film debut in Peter Ustinov's film adaptation of Herman Melville's Billy Budd (1962). His portrayal of the title character brought him not only an Academy Award nomination but also international attention. He then appeared opposite Laurence Olivier in Term of Trial (1962).

He was initially approached to play the role of James Bond when Sean Connery retired from the role, but did not receive a second call from producer Harry Saltzman because, in Stamp's opinion, 'my ideas about [how the role should be portrayed] put the frighteners on Harry. I didn’t get a second call from him'.

Stamp then travelled to Italy to star in Federico Fellini's Toby Dammit, a 50-minute portion of the Edgar Allan Poe film adaptation Histoires extraordinaires (1968, aka Spirits of the Dead). Stamp lived in Italy for several years, during which time his film work included Pier Paolo Pasolini's Teorema (1968) opposite Silvana Mangano, and Una Stagione all'inferno (1970). Stamp was considered for the title role of Alfie (1966), but turned it down in favour of Modesty Blaise (1966).

His subsequent film credits included The Mind of Mr. Soames (1970), Meetings with Remarkable Men (1979), and The Hit (1984), which won a Mystfest Award for Best Actor, shared with John Hurt and Tim Roth. Also in 1984, he had the opportunity to play the Devil in a cameo in The Company of Wolves. He also appeared in Link (1986), Legal Eagles (1986), The Sicilian (1987) and a gleaming cameo as Sir Larry Wildman in Wall Street (1987). His film Beltenebros (1992) (aka Prince of Shadows), was awarded the Silver Bear at the 42nd Berlin International Film Festival. Stamp began his fourth decade as an actor wearing some of the choicest of Tim Chappel's Academy Award-winning costumes for the comedy The Adventures of Priscilla, Queen of the Desert (1994) which co-starred Guy Pearce and Hugo Weaving.

In 1999, Stamp played a lead role in The Limey to widespread critical acclaim at the Cannes Film Festival. For his performance, Stamp received nominations for Best Male Lead at the 2000 Independent Spirit Awards and for Best British Actor at the London Film Critics' Circle (ALFS) Awards. Also in 1999, Stamp appeared in the blockbuster Star Wars Episode I: The Phantom Menace as Chancellor Finis Valorum (an experience he later described as 'boring'), followed by Bowfinger (1999) and Red Planet (2000). He also appeared in Damian Pettigrew's award-winning documentary, Fellini: I'm a Born Liar (2002), offering insights into the mind and working methods of Italian director Federico Fellini whom Stamp had worked with in the 1960s.

In the 1960s, Stamp shared a house with actor Michael Caine before and during their rise to fame. In his autobiography, What's it All About, Caine states that he "still wakes up sweating in the night as he sees Terence agreeing to accept my advice to take the role in Alfie".

Stamp received extensive media coverage of his romances in the 1960s with film star Julie Christie and supermodel Jean Shrimpton. His romance with Christie during London's "swinging '60s" was thought to be referenced in the Kinks' 1967 song "Waterloo Sunset", with the lines about "Terry and Julie". He and Shrimpton were one of the most-photographed couples of Mod London. It was after Shrimpton ended her relationship with Stamp that he moved to India, spending time in Pune at the ashram of Bhagwan Shree Rajneesh, meditating and studying his teachings, and dropping out from society for several years.