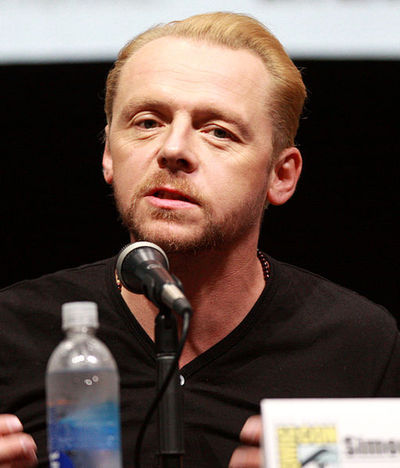 He also portrayed Benji Dunn in the Mission: Impossible film series, Montgomery Scott in the 2009 film Star Trek and its sequel Star Trek Into Darkness (2013), and Thompson in The Adventures of Tintin (2011). Much of his major work has been in collaboration with some combination of Wright, Nick Frost, Jessica Hynes, and Dylan Moran.

Pegg was born in Brockworth, Gloucestershire, to Gillian Rosemary (née Smith), a former civil servant, and John Henry Beckingham, a jazz musician and keyboard salesman. His parents divorced when he was seven and he took the surname of his stepfather (Pegg), after his mother re-married.

Pegg attended various schools, including Castle Hill Primary School, Brockworth Comprehensive Secondary School and The King's School, Gloucester. He later moved to Stratford-upon-Avon when he was 16 and studied English Literature and Theatre at Stratford-upon-Avon College. He graduated from the University of Bristol in 1991 with a BA in Theatre, Film and Television and wrote his undergraduate thesis on "A Marxist overview of popular 1970s cinema and hegemonic discourses". While there, he performed as a member of the comedy troupe "David Icke and the Orphans of Jesus", alongside David Walliams, Dominik Diamond, Myfanwy Moore, Barnaby Power, and Jason Bradbury.

His early appearances in TV series and films include Asylum, Six Pairs of Pants, Faith in the Future, Big Train and Hippies. Between 1998 and 2004, Pegg was regularly featured on BBC Radio 4's The 99p Challenge. Pegg's other credits include appearances in the World War II mini-series Band of Brothers; the television comedies Black Books, Brass Eye and I'm Alan Partridge; and the films The Parole Officer, 24 Hour Party People, and Guest House Paradiso. He played various roles during the tour of Steve Coogan's 1998 live stage show The Man Who Thinks He's It.

In 1999, he created and co-wrote the Channel 4 sitcom Spaced with Jessica Stevenson. The series was directed by Edgar Wright, with whom Pegg and Stevenson had previously worked on Asylum, and Pegg wrote the character of Mike Watt specifically for his friend Nick Frost. For his performance in this series, Pegg was nominated for a British Comedy Award as Best Male Comedy Newcomer. The experience of making a Spaced fantasy sequence featuring zombies led to Pegg and Wright co-writing the "romantic zombie comedy" film Shaun of the Dead, released in April 2004, in which Pegg also starred. At George A. Romero's invitation, Pegg and Wright made cameo appearances in Romero's zombie film, Land of the Dead. In 2004, Pegg starred in a spin-off of the television show Danger! 50,000 Volts! called Danger! 50,000 Zombies!, in which he played a zombie hunter named Dr. Fell.

Pegg married his long-time girlfriend Maureen McCann, a music industry publicist, on 23 July 2005 in Glasgow; Nick Frost was the best man at his wedding. The couple has one child together, Matilda (b. 2009).