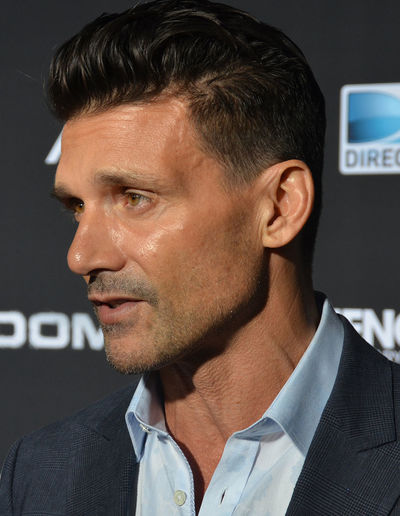 Frank Anthony Grillo (born June 8, 1965) is an American actor known for his roles in films such as Warrior (2011), The Grey (2012), End of Watch (2012) and Zero Dark Thirty (2012). He had his first leading role in the thriller film The Purge: Anarchy (2014), portraying Sergeant Leo Barnes, a role he reprised in The Purge: Election Year (2016). He also plays the Marvel supervillain Brock Rumlow / Crossbones in the Marvel Cinematic Universe.

Grillo was born in New York City as the oldest of three children, and is of Italian heritage. He graduated from New York University with a business degree and spent a year on Wall Street before being asked to do a Miller Genuine Draft beer commercial.

Grillo started his acting career by appearing in commercials, for companies such as American Express and Sure deodorant. His first film role was in's 1992 The Mambo Kings, and he went on to appear in the films Minority Report (2002), April's Shower (2006), and iMurders (2008).

Grillo was in the 2010 horror film Mother's Day in the role of Daniel Sohapi and the following year, had a supporting role in the 2011 film Warrior as MMA trainer Frank Campana. In 2012, he played Diaz in the survival thriller The Grey with Liam Neeson and as Sarge in End of Watch with Jake Gyllenhaal. In 2013, he starred with Jaimie Alexander in the romantic thriller film Collision and had a bit role in the action film Homefront with Jason Statham.

In 2014, Grillo was cast as HYDRA agent Brock Rumlow in the 2014 film Captain America: The Winter Soldier. The same year, he starred as Sergeant Leo Barnes in the sequel The Purge: Anarchy, and reprised his role in 2016's The Purge: Election Year. He also reprised the role of Brock Rumlow/Crossbones in the third installment of the Captain America film series, Civil War, which was released on May 6, 2016.

Grillo is also set to star in the upcoming films Demonic and Beyond Skyline, all set to release in 2015. He will also co-star alongside Aaron Tveit as brothers and gunmen, Jesse and Pru, in the upcoming drama thriller Big Sky.

Grillo first appeared on television in episodes of Silk Stalkings (1993), and Poltergeist: The Legacy (1996) before being cast as oil tycoon Hart Jessup on the daytime soap opera Guiding Light in 1996 up until 1999. In 2002, he was cast in the series For the People as Det. J.C. Hunter and played Hunter until 2003. One of his more notable television roles was on the crime drama Prison Break where he played Nick Savrinn from 2005 to 2006. During that time, he also appeared on the Blind Justice as Marty Russo.

He was in the first and only season of The Kill Point in 2007, and played the role of Jimmy in the CSI: NY episode "The Things About Heroes," which aired in November 2007. In 2010, he starred in the sci-fi series The Gates opposite Marisol Nichols and Rhona Mitra. The series only lasted one season.

Since 2014, Grillo has starred in the DirecTV drama series Kingdom as MMA coach Alvey Kulina alongside Nick Jonas and Jonathan Tucker.