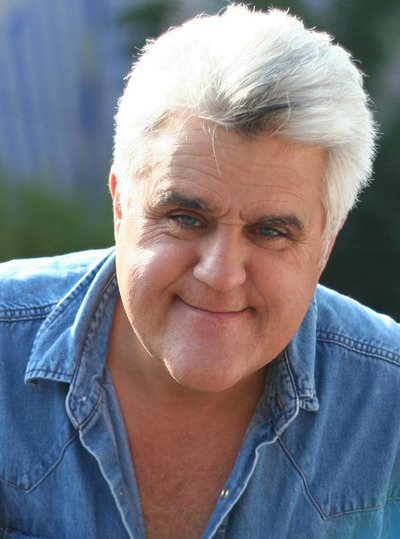 Leno was born in New Rochelle, New York, in 1950. His homemaker mother, Catherine (née Muir; 1911–1993), was born in Greenock, Scotland, and came to the United States at age 11. Leno's father, Angelo (1910–1994), who worked as an insurance salesman, was born in New York, to immigrants from Flumeri, Italy. Leno grew up in Andover, Massachusetts, and although his high school guidance counselor recommended that he drop out of school, he later obtained a Bachelor's degree in speech therapy from Emerson College, where he started a comedy club in 1973. Leno's only sibling was his late older brother, Patrick, who was a Vietnam veteran and a lawyer.

Leno made his first appearance on The Tonight Show on March 2, 1977, performing a comedy routine. During the 1970s, Leno appeared in minor roles in several television series and films, first in the 1976 episode "J.J. in Trouble" of Good Times and the same year in the pilot of Holmes & Yo-Yo. After an uncredited appearance in the 1977 film Fun with Dick and Jane, he played more prominent parts in 1978 in American Hot Wax and Silver Bears. Other films and television series from that period include Almost Heaven (1978), "Going Nowhere" (1979) from One Day at a Time, Americathon (1979), Polyester (1981), "The Wild One" (1981) from Alice, and both "Feminine Mistake" (1979) and "Do the Carmine" (1983) from Laverne & Shirley. Leno's only starring film role was the 1989 direct-to-video Collision Course, opposite Pat Morita. He also appeared numerous times on Late Night with David Letterman.

During the 2007–08 Writers Guild of America strike, Leno was accused of violating WGA guidelines by writing his own monologue for The Tonight Show. While NBC and Leno claim there were private meetings with the WGA where there was a secret agreement allowing this, the WGA denied such a meeting. Leno answered questions in front of the Writers Guild of America, West trial committee in February 2009 and June 2009, and when the WGAW published its list of strike-breakers on 11 August 2009, Leno was not on the list.

In 1998, Leno competed in a tag-team match at the WCW's Road Wild pay-per-view. Since 2001, he has voiced The Crimson Chin, a recurring superhero in the Nickelodeon animated series The Fairly Odd Parents.

On April 23, 2009, Leno checked himself into a hospital with an undisclosed illness. He was released the following day and returned to work on Monday, April 27. The two subsequently cancelled Tonight Show episodes for April 23 and April 24 were Leno's first in 17 years as host. Initially, the illness that caused the absence was not disclosed, but later Leno told People magazine that the ailment was exhaustion.

Because Leno's show continued to lead all late-night programming in the Nielsen ratings, the pending expiration of Leno's contract led to speculation about whether he would become a late-night host for another network after his commitment to NBC expired. Leno left The Tonight Show on Friday May 29, 2009, and Conan O'Brien took over on June 1, 2009.

On December 8, 2008, it was reported that Leno would remain on NBC and move to a new hour-long show at 10 p.m. Eastern Time (9 p.m. Central Time) five nights a week. This show followed a similar format to The Tonight Show, was filmed in the same studio and retained many of Leno's most popular segments. Late Night host Conan O'Brien was his successor on The Tonight Show.

Jay Leno's new show, titled The Jay Leno Show, debuted on September 14, 2009. It was announced at the Television Critics Association summer press tour that it would feature one or two celebrities, the occasional musical guest, and keep the popular "Headlines" segments, which would air near the end of the show. First guests included Jerry Seinfeld, Oprah Winfrey (via satellite), and a short sit-down with Kanye West discussing his controversy at the 2009 MTV Video Music Awards, which had occurred the night before.

Leno has been married since 1980 to Mavis Leno; they have no children, by mutual agreement.

He is known for his prominent jaw, which has been described as mandibular prognathism. In the book Leading with My Chin he stated that he is aware of surgery that could reset his mandible, but does not wish to endure a prolonged healing period with his jaws wired shut.

Leno is dyslexic. He claims to only need four to five hours of sleep each night. Leno does not drink or smoke, nor does he gamble. He spends most of his free time visiting car collections or working in his private garage.

Leno reported that he does not spend a penny of his money that he earns from The Tonight Show. Instead, he lives off his money from his stand-up routines.