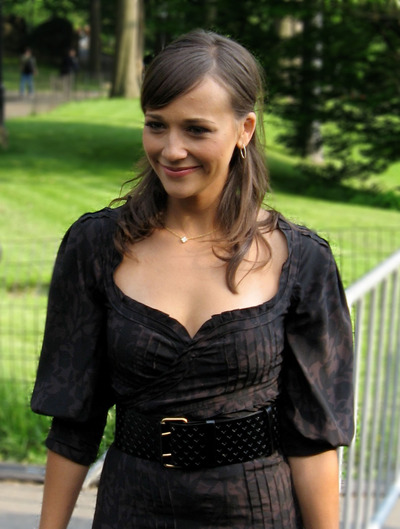 Rashida Leah Jones (born February 25, 1976) is an American film and television actress, comic book author, screenwriter, and occasional singer. On TV series, she played Louisa Fenn on Boston Public and Karen Filippelli on The Office. She has had numerous film roles, including in I Love You, Man, Our Idiot Brother, The Social Network, and The Muppets. She co-wrote the screenplay for Celeste and Jesse Forever (2012), in which she starred. In 2009 Jones began appearing on the NBC comedy series Parks and Recreation as Ann Perkins.

Jones was born in Los Angeles, the younger daughter of Quincy Jones, a musician who became a media mogul and producer, and Peggy Lipton, an actress noted for her role on the TV series The Mod Squad. Rashida has an older sister, Kidada Jones. They also have five half-siblings by their father's other relationships. Her father is African American, with ancestry including Welsh. Her mother is Ashkenazi Jewish (a descendant of immigrants from Russia and Latvia). Rashida and her sister were raised in Reform Judaism by their mother; she attended Hebrew school, though she left at the age of ten and did not have a Bat Mitzvah. As an adult, Jones practices Judaism.

She grew up in Bel Air, Los Angeles, California. Jones has said of her parents' mixed-race marriage: "It was the 1970s and still not that acceptable for them to be together."

In his autobiography, Quincy Jones recalled how he would often find his six-year-old daughter Rashida under the covers after bedtime with a flashlight, reading five books at a time. She says that she grew up a "straight-up nerd ... I had a computer with floppy disks and a dial-up modem before it was cool." Jones displayed musical ability from a young age and can play classical piano. Her mother told Entertainment Tonight that Jones is "also a fabulous singer and songwriter, so she has inherited it (from Quincy), there's no question about it. Her dad's teaching her how to orchestrate and arrange too."

Jones attended The Buckley School in Sherman Oaks, California, where she made the National Honor Society and was voted "Most Likely To Succeed" by her classmates. She was a schoolmate of Paris Hilton and Kim Kardashian. Jones' parents divorced when she was 14 years old; her sister subsequently remained with their father, while Rashida moved with their mother to Brentwood.

In 1994, Jones garnered attention with an open letter responding to scathing remarks made by Tupac Shakur, a rapper, about her parents' interracial marriage. She later befriended Shakur, who was engaged to her sister Kidada before he was killed. After high school, Jones left California to attend Harvard University.

At Harvard, Jones was a resident of Eliot House and belonged to the Hasty Pudding Theatricals, Harvard Radcliffe Dramatic Club, Harvard-Radcliffe Opportunes, Black Students Association, and the Signet Society. She was initially interested in becoming a lawyer but changed her mind after becoming disillusioned by the O. J. Simpson murder trial.[8] She became involved in the performing arts and served as musical director for the "Opportunes" a cappella group, co-composed the score for the 149th annual Hasty Pudding Theatricals performance, and acted in several plays. In her second year at college, Jones performed in For Colored Girls Who Have Considered Suicide When the Rainbow Is Enuf, which she said was "healing" because she had been seen by many blacks as not being "black enough". She studied religion and philosophy and graduated in 1997.

Jones made her professional acting debut in The Last Don, a 1997 mini-series based on the novel by Mario Puzo. She next appeared in Myth America, East of A, and If These Walls Could Talk 2. In 2000, she guest starred as Karen Scarfolli in an episode of Freaks and Geeks before landing the role of Louisa Fenn on Boston Public. Between 2000 and 2002, she appeared in 26 episodes, earning an NAACP Image Award nomination in her final year. Although she had a minor supporting role in the series, film opportunities quickly surfaced. She had a small role in Full Frontal, directed by Steven Soderbergh, and starred in Now You Know, written and directed by Kevin Smith regular Jeff Anderson. She also starred in the short film Roadside Assistance with Adam Brody.

After Jones left Boston Public, she appeared in Death of a Dynasty, directed by Damon Dash, and two episodes of Chappelle's Show on Comedy Central. In 2004, she was cast in Strip Search, an HBO film directed by Sidney Lumet, but her scenes were cut from the final broadcast version. Later that year, she played Dr. Rachel Keyes in Little Black Book and starred as Edie Miller in British drama series NY-LON. In 2005, Jones played Karen in the Stella pilot on Comedy Central and special government agent Carla Merced in the TNT police drama Wanted.

Jones was considering leaving the acting profession and pursuing a graduate degree in public policy before she was offered the part on The Office. She joined the ensemble cast in September 2006, playing the role of Karen Filippelli. She appeared regularly during the third season, returning as a guest star for two episodes in season four and another in season five.

Jones had a 3½ year relationship with actor Tobey Maguire, ending in 2000. She became engaged to the Grammy Award-winning music producer Mark Ronson in February 2003. He proposed on her 27th birthday, using a custom-made crossword puzzle spelling out "Will you marry me?" Their relationship ended approximately one year later. In 2009 she was dating Jon Favreau, who had become the Director of Speechwriting for President Barack Obama.