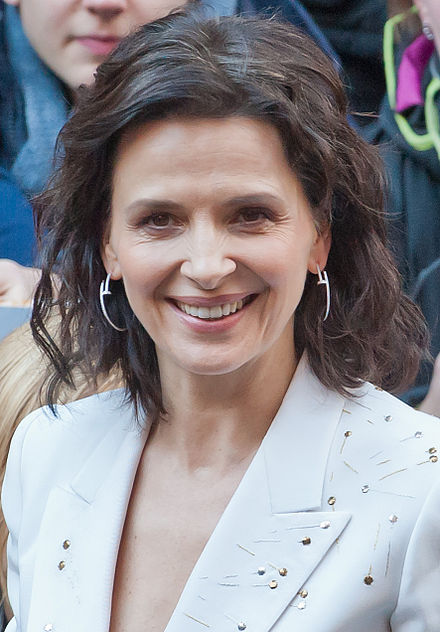 Juliette Binoche (​born 9 March 1964) is a French actress, artist and dancer. She has appeared in more than 40 feature films, been recipient of numerous international awards, and has appeared on stage and in movies across the world. Coming from an artistic background, she began taking acting lessons during adolescence. After performing in several stage productions, she began acting in films by auteur directors Jean-Luc Godard (Hail Mary, 1985), Jacques Doillon (Family Life, 1985) and André Téchiné, who made her a star in France with the leading role in his 1985 drama Rendez-vous. Her sensual performance in her English-language debut The Unbearable Lightness of Being (1988), directed by Philip Kaufman, launched her international career.

She sparked the interest of Steven Spielberg, who offered her several parts including a role in Jurassic Park which she declined, choosing instead to join Krzysztof Kieślowski in Three Colors: Blue (1993), a performance for which she won the Venice Film Festival Award for Best Actress and a César. Three years later Binoche gained further acclaim in Anthony Minghella's The English Patient (1996), for which she was awarded an Academy Award and a BAFTA for Best Supporting Actress in addition to the Best Actress Award at the 1997 Berlin International Film Festival. For her performance in Lasse Hallström's romantic comedy Chocolat (2000), Binoche was nominated for an Academy Award for Best Actress.

During the 2000s she maintained a successful career, alternating between French and English language roles in both mainstream and art-house productions. In 2010, she won the Best Actress Award at the Cannes Film Festival for her role in Abbas Kiarostami's Certified Copy making her the first actress to win the European "Best Actress Triple Crown" (for winning best actress award at the Berlin, Cannes and Venice film festivals).

Throughout her career Binoche has intermittently appeared on stage, most notably in a 1998 London production of Luigi Pirandello's Naked and in a 2000 production of Harold Pinter's Betrayal on Broadway for which she was nominated for a Tony Award. In 2008 she began a world tour with a modern dance production in-i devised in collaboration with Akram Khan. Often referred to as "La Binoche"[1] by the press, her other notable performances include: Mauvais Sang (1986), Les Amants du Pont-Neuf (1991), Damage (1992), The Horseman on the Roof (1995), Code Unknown (2000), Caché (2005), Breaking and Entering (2006), Flight of the Red Balloon (2007) and Camille Claudel 1915 (2013).

Binoche was born in Paris, the daughter of Jean-Marie Binoche, a director, actor, and sculptor, and Monique Yvette Stalens, a teacher, director, and actress. Her father, who is French, also has one eighth Portuguese-Brazilian ancestry; he was raised partly in Morocco by his French-born parents. Juliette's mother was born in Częstochowa, Poland. Binoche's maternal grandfather, Andre Stalens, was born in Poland, of Belgian (Walloon) and French descent, and Binoche's maternal grandmother, Julia Helena Młynarczyk, was of Polish origin. Both of them were actors who were born in Częstochowa; they were imprisoned at Auschwitz, because they were considered to be intellectuals by the German Nazi occupiers.

When Binoche's parents divorced in 1968, four-year-old Binoche and her sister Marion were sent to a provincial boarding school. During their teens, the Binoche sisters spent their school holidays with their maternal grandmother, not seeing either parent for months at a time. Binoche has stated that this perceived parental abandonment had a profound effect on her.

She was not particularly academic and in her teenage years she began acting at school in amateur stage productions. At 17, she directed and starred in a student production of the Eugène Ionesco play, Exit the King. She studied acting at the Conservatoire National Supérieur d'Art Dramatique (CNSAD), but quit after a short time as she disliked the curriculum. In the early 1980s, she found an agent through a friend and joined a theater troupe with which she toured France, Belgium and Switzerland under the pseudonym "Juliette Adrienne". Around this time she began lessons with acting coach Vera Gregh.

Her first professional screen experience was as an extra in the three part TF1 television series Dorothée, danseuse de corde (1983) directed by Jacques Fensten, which was followed by a similarly small role in the provincial television film Fort bloque directed by Pierrick Guinnard. Following this Binoche secured her first feature film appearance with a minor role in Pascal Kané's Liberty Belle (1983). Her role required just two days on set, but was enough to inspire Binoche to pursue a career in film.

Binoche's early films would see her established as a French star of some renown. In 1983, she auditioned for the female lead in Jean-Luc Godard's' controversial Hail Mary, a modern retelling of the Virgin birth. Godard requested a meeting with Binoche having seen a photo of her taken by her boyfriend of the time. She has said that she spent six months on the set of the film in Geneva, although her role in the final cut is contained to only a few scenes. Further supporting roles followed in a variety of French films: Annick Lanoë's Les Nanas was to give Binoche her most noteworthy role to date, playing opposite established stars Marie-France Pisier and Macha Meril, in a mainstream comedy. However, she has stated that the experience was not particularly memorable or influential. She gained more significant exposure in Jacques Doillon's critically acclaimed Family Life, which cast her as the volatile teenage step-daughter of Sami Frey's central character. This film was to set the tone of her early career. Doillon has commented that in the original screenplay her character was written to be 14 years old, he was so impressed with Binoche's audition he changed the character's age to 17 to allow her take the role. In April 1985, Binoche followed this with another supporting role in Bob Decout's Adieu Blaireau, a policier thriller starring Philippe Léotard and Annie Girardot. Adieu Blaireau failed to have much impact with critics or audiences.

It was to be later in 1985 that Binoche would fully emerge as a leading actress with her role in André Téchiné's Rendez-vous. She was cast at short notice when Sandrine Bonnaire had to abandon the film due to a scheduling conflict. Rendez-vous premiered at the 1985 Cannes Film Festival, winning Best Director. The film was a sensation and Binoche became the darling of the festival. Rendez-Vous is the story of a provincial actress, Nina (Binoche), who arrives in Paris and embarks on a series of dysfunctional liaisons with several men, including the moody, suicidal Quentin (Lambert Wilson). However it is her collaboration with theatre director Scrutzler, played by Jean-Louis Trintignant, which comes to define Nina. In a review of Rendez-Vous in Film Comment, Armond White described it as "Juliette Binoche's career defining performance".

In 1986, Binoche was nominated for her first César for Best Actress in a Leading Role for her performance in the film. Following Rendez-Vous, she was unsure of what role to take next. She auditioned unsuccessfully for Yves Boisset's Bleu comme l'enfer and Robin Davis's Hors la loi, but was eventually cast in My Brother-in-law Killed My Sister (1986) by Jacques Rouffio opposite the popular French stars Michel Serrault and Michel Piccoli. This film was a critical and commercial failure. Binoche has commented that Rouffio's film is very significant to her career as it taught her to judge roles based on the quality of the screenplay and her connection with a director, not on the reputation of other cast members. Later in 1986, she again starred opposite Michel Piccoli in Leos Carax's Mauvais Sang. This film was a critical and commercial success, leading to Binoche's second César nomination. Mauvais Sang is an avant-garde thriller in which she plays Anna the vastly younger lover of Marc (Piccoli) who falls in love with Alex (Denis Lavant), a young thief. Binoche has stated that she, "discovered the camera", while shooting this film.

The 1990s saw Binoche cast in a series of international films that were critical and commercial successes, winning her praise and awards. This period saw her persona develop from that of a young gamine to a more melancholic, tragic presence. Critics suggested that many of her roles were notable for her almost passive intensity in the face of tragedy and despair. In fact Binoche has nicknamed her characters from this period as her "sorrowful sisters". Following the long shoot of Les Amants du Pont-Neuf, Binoche relocated to London for the 1992 productions of Emily Brontë's Wuthering Heights and Damage, both of which considerably enhanced her international reputation. Yet, from a professional and personal point of view, both films were significant challenges for Binoche; her casting opposite Ralph Fiennes's Heathcliff in Wuthering Heights, instead of English actresses Helena Bonham Carter[46] and Kate Beckinsale, was immediately contentious and drew derision from the British press, unimpressed that a uniquely English role had gone to a French actress. The film had its world premiere at the 1992 Edinburgh International Film Festival. Reviews were poor, with Binoche being cynically dubbed "Cathy Clouseau" and being derided for her "franglais" accent. Both Binoche and director Peter Kosminsky distanced themselves from the film, with Binoche refusing to do any promotion for the film or to redub it into French.

Following the success of Chocolat, the early 2000s saw Binoche internationally recognized as an A-list movie star. However, her persona seemed to be somewhat fixed following a series of period roles where she played the always stoic heroine facing tragedy and desolation. Keen to try something new, Binoche returned to French cinema in 2002 in an unlikely role; Jet Lag opposite Jean Reno saw Binoche play a ditzy beautician. The film, directed by Daniele Thompson, was a box-office hit in France and saw Binoche once again nominated for a César for Best Actress. The film tells the story of a couple who meet at an airport during a strike. Initially the pair despises each other, but, over the course of one night, they find common ground and maybe even love. This playful spirit continued when Binoche featured in a 2003 Italian television commercial for the chocolates Ferrero Rocher. The advertisement played upon her Chocolat persona featuring Binoche handing out the chocolates to people on the streets of Paris.

Binoche has two children: a son Raphaël (born on 2 September 1993), whose father is André Halle, a professional scuba diver, and a daughter Hana (born on 16 December 1999), whose father is actor Benoît Magimel, with whom Binoche starred in the 1999 film Children of the Century. Her sister, Marion Stalens, born 1960, is a professional photographer with Corbis, as well as a director of documentary films, including; La réconciliation?, a documentary shot on the set of John Boorman's film In My Country, The Actress and the Dancer, exploring the genesis of Binoche's dance show in-i and Juliette Binoche - Sketches for a Portrait a documentary which follows Binoche as she paints the portraits that would later appear in her book Portraits in Eyes.

Her half-brother Camille Humeau (born 1978) is an acclaimed musician and has been part of the line-up of Oncle Strongle, before top-lining the group Artichaut Orkestra. In 2007, he appeared in a stage production of Cabaret directed by Sam Mendes. Stage director Pierre Pradinas is married to her sister Marion.