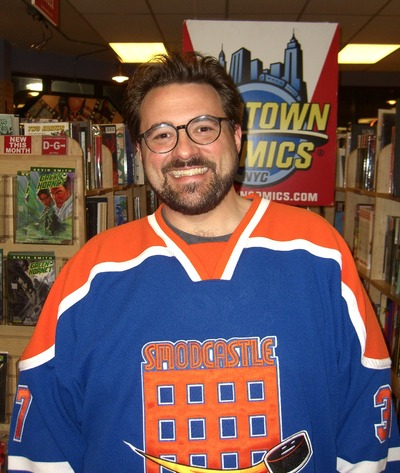 He came to prominence with the low-budget comedy Clerks (1994), in which he appeared as the character Silent Bob. Smith's first several films were mostly set in his home state of New Jersey, and while not strictly sequential, they frequently feature crossover plot elements, character references, and a shared canon described by fans as the "View Askewniverse", named after his production company View Askew Productions, which he co-founded with Scott Mosier.

Smith also directed and produced films such as the buddy cop action comedy Cop Out, as well as the horror film Red State.

Smith is also the owner of Jay and Silent Bob's Secret Stash, a comic book store in Red Bank, New Jersey. He co-hosts several weekly podcasts that are released on SModcast Internet Radio. Smith is well known for participating in long, humorous Q&A sessions that are often filmed for DVD release, beginning with An Evening with Kevin Smith.

Kevin Smith was born August 2, 1970 in Red Bank, New Jersey, the son of Grace (née Schultz), a homemaker, and Donald E. Smith (1936–2003), a postal worker. He has an older sister, Virginia, and an older brother, Donald Smith, Jr. He was raised in a Catholic household, and attended Henry Hudson Regional High School in Highlands.

Smith is married to Jennifer Schwalbach Smith, whom he met while she was interviewing him for USA Today. They cohost the "Plus One" podcast. He also photographed her for the magazine Playboy. Their daughter, Harley Quinn, was born June 26, 1999, and was named after the character from Batman: The Animated Series, who was created by friend and fellow writer Paul Dini. They live in the Hollywood Hills, in a house Smith purchased from longtime friend Ben Affleck in 2003.