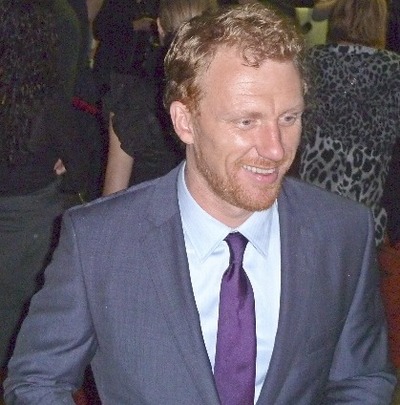 Kevin McKidd (born 9 August 1973) is a Scottish television and film actor and director. Before playing the role of Owen Hunt in Grey's Anatomy, McKidd starred as Tommy in Danny Boyle's Trainspotting (1996), Count Vronsky in the BBC miniseries Anna Karenina (2000), and Lucius Vorenus in the historical drama series Rome (2005–2007). He also provides the voice of John "Soap" MacTavish in the video games Call of Duty: Modern Warfare 2 and Call of Duty: Modern Warfare 3.

McKidd was born and brought up in Elgin, in the north-east of Scotland, the son of Kathleen, a secretary, and Neil McKidd, a plumber. At the age of 17, he worked at the Macallan distillery in Speyside. He attended Seafield Primary School and Elgin Academy, and was a member of the local amateur dramatic group, Moray Youth Theatre. Planning to study engineering, he attended the University of Edinburgh, but dropped out and instead enrolled at Queen Margaret College in Edinburgh to study drama. He also joined Edinburgh University's student theatre company, Bedlam Theatre where he performed as a member of the improvised comedy troupe The Improverts.

After playing Tommy in Trainspotting, McKidd was cast as Father Deegan in the 1996 Christmas episode of Father Ted. Subsequent roles include Malky Johnson in Small Faces. In 2004, he played James Hepburn, 4th Earl of Bothwell, the third husband of Mary, Queen of Scots, in the BBC mini-series Gunpowder, Treason & Plot.

In 1999 he was part of an ensemble cast in Mike Leigh's Topsy Turvy, depicting the development of Gilbert and Sullivan's The Mikado. The actors researched their historical characters and used this knowledge during extensive rehearsals to help develop dialog for scenes blocked out by Leigh. McKidd, like the rest of the cast, did his own singing in the Gilbert & Sullivan operettas portrayed in the film.

In 2001 he played Elliot in the British film Understanding Jane, directed by Caleb Lindsay. He appeared in Ridley Scott's Kingdom of Heaven, and in the 2002 film adaptation of Nicholas Nickleby. In Neil Marshall's horror film, Dog Soldiers, he appeared as Pvt. Lawrence Cooper. In the 2005 BBC drama, The Virgin Queen, he played Thomas Howard, 4th Duke of Norfolk.

McKidd married Jane Parker in 1999, and they have two children, Joseph and Iona. The family resides in Los Angeles during filming of Grey's Anatomy, but try to go back to Scotland or the UK at least twice a year. Playing a doctor has led the actor to support the P3 Project, a friend's charity focusing on African pediatric care.