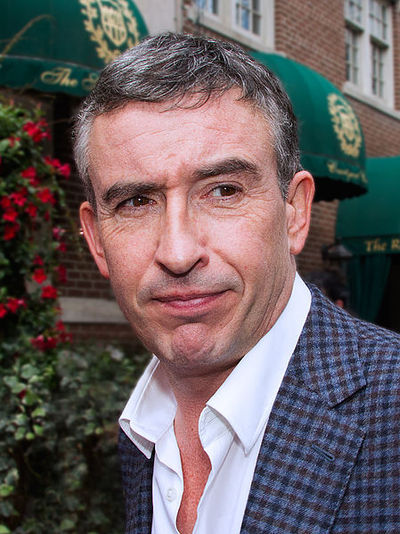 Stephen John "Steve" Coogan (born 14 October 1965) is an English actor, stand-up comedian, impressionist, writer, and producer. He began his career in the 1980s, working as a voice artist on the satirical puppet show Spitting Image. In the early 1990s, he began creating original comic characters, leading him to win the Perrier Awardat the Edinburgh Festival Fringe. In 1999, he co-founded the production company Baby Cow Productions.

While working with Armando Iannuccion The Day Today and On the Hour, Coogan created his most developed and popular character, Alan Partridge, a socially awkward and politically incorrect regional media personality. He featured in several television series, which earned him three BAFTA nominations and two wins for Best Comedy Performance. A feature-length film, Alan Partridge: Alpha Papa, was released in 2013, and opened at number one at the British box office.

Coogan grew in prominence within the film industry in 2002, after starring in The Parole Officer and 24 Hour Party People. He portrayed Phileas Fogg in the 2004 remake Around the World in 80 Days and co-starred in The Other Guys, Tropic Thunder, In the Loop, Hamlet 2, Our Idiot Brother, Ruby Sparks and the Night at the Museum films, as well as collaborating with Rob Brydon in The Trip and A Cock and Bull Story. He was also a voice actor in the animated comedy film 2013 Despicable Me 2.

Coogan has also branched out into more dramatic roles, with What Maisie Knew, and portrayed Paul Raymond in the biopic The Look of Love. He co-wrote, produced, and starred in the film adaptation Philomena, which earned him a Golden Globe and BAFTA nomination, and two Academy Award nominations (for Best Adapted Screenplay and Best Picture). He has been cast in the lead role for the ABC television pilot Doubt, created by David Shore.

On 22 November 2011, Coogan, along with Hugh Grant, gave evidence to the Leveson Inquiry on phone hacking, favouring regulation of the press.

Coogan was born in Middleton, Lancashire, in the middle among six children. He attended Cardinal Langley Roman Catholic High School. He has stated that he had a happy childhood, and in addition to having four brothers and two sisters, his parents fostered children on a short-term basis.

Coogan had a talent for impersonation, and wanted to go to drama school, despite being advised by a teacher that it could lead to a precarious profession. After five failed applications to various drama schools within London, he received a place at the theatre company New Music before gaining a place at the Manchester Metropolitan School of Theatre.

Coogan began his career as a comic and impressionist, performing regularly in Ipswich, before working as a voice artist for television advertisements and the satirical puppet show Spitting Image. In 1992, Coogan won the Perrier Award at the Edinburgh Festival Fringe for his performance with long-time collaborator John Thomson, and starred alongside Caroline Aherne and John Thomson in a one-off Granada TV sketch show The Dead Good Show. His most prominent characters developed at this time were Paul Calf, a stereotypical working class Mancunian, and his sister Pauline, played by Coogan in drag.

While working with Armando Iannucci and Chris Morris on theRadio 4 comedy On the Hour, Coogan conceived his most popular and developed character, a socially awkward and politically incorrect regional media personality. He appeared as a sports presenter on the television comedy The Day Today, before hosting his own chat show, Knowing Me Knowing You with Alan Partridge. In 1997, Partridge returned in the sitcom I'm Alan Partridge, which was followed by a second series in 2002, and received five BAFTA nominations. Partridge featured in Coogan's 2008 stand-up tour.

Paul Calf first began as a character named 'Duncan Disorderly' in Coogan's early stand-up routines. Calf first came to wider public notice in 1993, with several appearances on Saturday Zoo, a late-night variety show presented by Jonathan Ross on Channel 4. Paul has appeared in two video diaries, an episode of Coogan's Run, and in various stand-up performances. He is an unemployed Mancunian wastrel with a particular hatred of students. His catchphrase is "Bag o' shite". Paul lives in a council house in the fictional town of Ottle with his mother and his sister, Pauline Calf (also played by Coogan). His father, Pete Calf (played by Coogan in Coogan's Run) died some time before the first video diary was made. For a long time he was obsessed with getting back together with his ex-girlfriend, Julie. Paul's best friend is "Fat" Bob (played by John Thomson), a car mechanic who eventually married Pauline. Paul supports Manchester City and is very partial to Wagon Wheels. He wears Burton suits, sports a bleached mullet and drives a Ford Cortina.

Notable film roles include Factory Records boss Tony Wilson in the film24 Hour Party People, Mole in Terry Jones' The Wind in the Willows,Phileas Fogg in a comical version of Jules Verne's Around the World in 80 Days from Disney, with Jackie Chan, Ambassador Mercy in Marie Antoinette, Bruce Tick in Sweet Revenge, and Octavius in Night at the Museum (a role he reprised in Night at the Museum: Battle of the Smithsonian).

Coogan said he "liked to keep himself private", adding; "I have never wanted to be famous, as such – fame is a by-product". He has been a popular target of the British tabloid press since 1996, who he stated have subjected him to entrapment and blackmail, printed obvious falsehoods about him, also targeting his family and friends in attempts to extract stories from them.

Coogan's younger brother, Brendan, is a former Top Gear presenter, and his elder brother, Martin, was the lead singer of the early 1990s band the Mock Turtles. All three attended the Cardinal Langley RC High School. Although brought up Catholic, Coogan now describes himself as an atheist. Coogan married Caroline Hickman in 2002, and divorced in 2005. Coogan entered rehab for personal issues. He dated model China Chow for three years. In March 2011 Coogan was guest editor for lads mag Loaded, where he met and began dating glamour model Elle Basey. The couple are still together. He has a daughter, Clare, from a previous relationship with solicitor Anna Cole