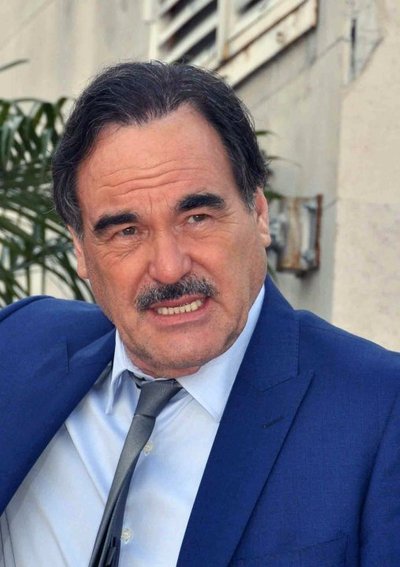 William Oliver Stone (born September 15, 1946) is an American film director, screenwriter, and producer. Stone came to public prominence between the mid-1980s and the early 1990s for writing and directing a series of films about the Vietnam War, in which he had participated as an infantry soldier. Many of Stone's films focus on contemporary and controversial American political and cultural issues, such as JFK, Natural Born Killers, and Nixon.

Stone's films often combine different camera and film formats within a single scene as evidenced in JFK,Natural Born Killers, and Nixon. British newspaper The Guardian has described Stone as "one of the few committed men of the left working in mainstream American cinema." Stone has received three Academy Awards for his work on the films Midnight Express, Platoon, and Born on the Fourth of July. He was presented with the Extraordinary Contribution to Filmmaking Award at the 2007 Austin Film Festival.

Stone was born in New York City, the son of Jacqueline (née Goddet) and Louis Stone, a stockbroker. He grew up in Manhattan and Stamford, Connecticut. His father was a non-practicing Jew, and his French-born mother was a non-practicing Roman Catholic. Stone was raised in the Episcopal Church, and now practices Buddhism. Stone attended Trinity School in New York City before his parents sent him away to The Hill School, a college-preparatory school in Pottstown, Pennsylvania. His parents were divorced abruptly while he was away at school (1962) and this, because he was an only child, marked him deeply. Stone's mother was often absent and his father made a big impact on his life; father-son relationships were to feature heavily in Stone's films.[8] He often spent parts of his summer vacations with his maternal grandparents in France, both in Paris and la Ferté-sous-Jouarre in eastern France. Stone also worked at 17 in the Paris mercantile exchange in sugar and cocoa — a job that proved inspirational to Stone for his film Wall Street. He speaks French fluently. Stone graduated from The Hill School in 1964.

Stone was admitted into Yale University, but left after a year to teach high school students at the Free Pacific Institute in South Vietnam. Stone taught for six months, after which he worked as a wiper on a United States Merchant Marine ship, traveling to Oregon. He returned to Yale, where he dropped out a second time (in part due to working on an autobiographical novel A Child's Night Dream, published 1997 by St. Martin's Press). In April 1967, Stone enlisted in the United States Army, requesting combat duty in Vietnam. He served from September 1967 through November 1968 with the 25th Infantry Division, then with the First Cavalry Division, earning a Bronze Star with Combat V for heroism in ground combat; he was wounded twice and received a Purple Heart with an Oak Leaf Cluster. He also received the Air Medal for participating in more than 25 helicopter combat assaults and the Army Commendation Medal.

Stone graduated from film school at New York University in 1971, where among his teachers was director Martin Scorsese (the same year, he had a small acting role in comedy The Battle of Love's Return). Stone made a short, well received 12 minute film Last Year in Viet Nam. He worked as a taxi driver, film production assistant, messenger, and salesman before making his mark in film as a scriptwriter in the late 70s, in the period between his first two films as a director: horror films Seizure and The Hand. In 1979, Stone won his first Academy Award, after adapting true-life jail tale Midnight Express into a hit film for British director Alan Parker (the two would later collaborate on a 1996 movie of stage musical Evita).

Stone wrote further features before his directing career took off in 1986, including Al Pacino's drug lord tale Scarface and Year of the Dragon with Mickey Rourke. Stone has either written or co-written most of the films he has directed. In 1986, Stone directed two films back to back: the critically acclaimed but commercially unsuccessful Salvador, shot largely in Mexico, and his long in development Vietnam project Platoon, shot in the Philippines.

Platoon brought Stone's name to a much wider audience. It also finally kickstarted a busy directing career, which saw him making nine films over the next decade. Alongside some negative reaction, Platoon won many rave reviews (Roger Ebert later called it the ninth best film of the 1980s), large audiences, and Academy Awards for Best Picture and Best Director. In 2007, a film industry vote ranked it at number 83 in an American Film Institute "AFI's 100 Years... 100 Movies" poll of the previous century's best American movies. British TV channel Channel 4 voted Platoonas the sixth greatest war film ever made.