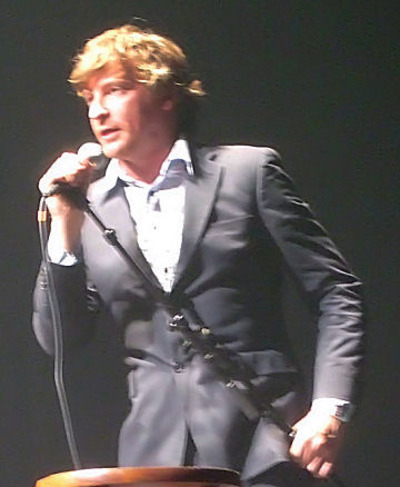 Rhys Darby (born 21 March 1974) is an actor and comedian from New Zealand, known for his energetic physical comedy routines, telling stories accompanied with mime and sound effects of things such as machinery and animals. Darby was nominated for the Billy T Award in 2001 and 2002. He also won the 2012 Fred (Dagg) award at the New Zealand International Comedy Festival, for Best NZ show.

Darby is best known for playing Murray Hewitt, the band manager of Flight of the Conchords in the HBO television series, a role he originally played in the BBC radio series under the name Brian Nesbit.

A former soldier (signaller trained in morse code), he left the New Zealand Army in 1994 and began studies at the University of Canterbury. In 1996 he formed a comedy duo, Rhysently Granted, with Grant Lobban. After winning an open mic contest at Southern Blues Bar in Christchurch they began performing at local venues. Rhysently Granted performed at two international comedy festivals which led to Darby moving up to Auckland to seek more solo stand-up experience. After performing his first solo show at the 2002 Edinburgh Festival Fringe, Darby moved to the UK to pursue his career further. At the same time, fellow Kiwis and friends Bret McKenzie and Jemaine Clement were dipping their toes in the waters at the Edinburgh Fringe.

In 2004 he appeared in the Flight of the Conchords BBC radio series as the band's manager Brian Nesbit alongside comedy stars such as Rob Brydon, Andy Parsons and Jimmy Carr.