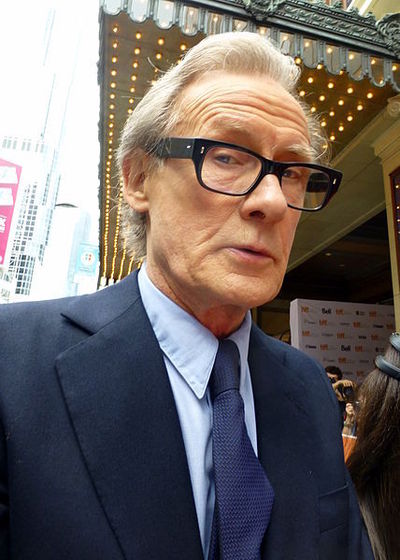 William Francis "Bill" Nighy (born 12 December 1949) is an English actor. He worked in theatre and television before his first cinema role in 1981, and made his name in television with The Men's Room in 1991, in which he played the womaniser Prof. Mark Carleton, whose extramarital affairs kept him "vital".

He is also known for his roles in the films Lawless Heart, I Capture the Castle, Shaun of the Dead, The Hitchhiker's Guide to the Galaxy, Notes on a Scandal, Hot Fuzz, Valkyrie, Harry Potter and the Deathly Hallows – Part 1, Rango and The Best Exotic Marigold Hotel. His performances were also acclaimed in the State of Play series and in the TV films The Girl in the Café, Gideon's Daughter and Page Eight, for which he earned Golden Globe nominations, winning one for Gideon's Daughter.

Nighy was born on 12 December 1949 in Caterham, Surrey. His mother, Catherine Josephine Nighy (née Whittaker), was a psychiatric nurse who was born in Glasgow, and his English-born father, Alfred Martin Nighy, managed a car garage after working in the family chimney sweeping business. Also of part Irish descent, Nighy was brought up as a Roman Catholic, serving as an altar boy.

He has two elder siblings, Martin and Anna. Nighy attended the John Fisher School, a Roman Catholic grammar school in Purley, where he was a member of the school theatre group. He left the school with two O-levels and then took a job with the Croydon Advertiser as a messenger boy. He went on to train at the Guildford School of Acting.

After two seasons at the Everyman Theatre, Liverpool, Nighy made his London stage debut at the National Theatre in an epic staging of Ken Campbell and Chris Langham's Illuminatus!, which opened the new Cottesloe Theatre on 4 March 1977, and went on to appear in two David Hare premieres, also at the National. During the 1980s, he appeared in several television productions, among them Hitler's SS: Portrait in Evil, alongside John Shea and Tony Randall.

He has starred in many radio and television dramas, notably the BBC serial The Men's Room (1991). He claimed that the serial, an Ann Oakley novel adapted by Laura Lamson, was the job which launched his career. More recently he has featured in the thriller State of Play (2003) and costume drama He Knew He Was Right (2004). He played Samwise Gamgee in the 1981 BBC Radio dramatisation of The Lord of the Rings (where he was credited as William Nighy), and appeared in the 1980s BBC Radio versions of Yes Minister episodes. He starred alongside Stephen Moore and Lesley Sharp in the acclaimed short radio drama Kerton's Story first aired in 1996. He had a starring role in the 2002 return of Auf Wiedersehen, Pet, portraying crooked politician Jeffrey Grainger. He has also made a guest appearance in the BBC Radio 4 series Baldi.

Two of Nighy's most acclaimed stage performances were in National Theatre productions. Taking the role of Bernard Nightingale, an unscrupulous university don, in Tom Stoppard's Arcadia (1993), he engaged in witty exchanges with Felicity Kendal, playing the role of Hannah Jarvis, an author; and he played a consultant psychiatrist in Joe Penhall's Blue/Orange (2000), for which he won an Olivier Award nomination for Best Actor, and which transferred to the West End at the Duchess Theatre the following year.

Nighy received some recognition by American audiences for his acclaimed portrayal of overaged rock star Ray Simms in the 1998 film Still Crazy. In 1999 he gained further prominence in the UK with the starring role in "The Photographer", an episode of the award-winning BBC-TV mockumentary comedy series People Like Us, playing Will Rushmore, a middle aged man who has abandoned his career and family in the deluded belief that he can achieve success as a commercial photographer.

Nighy had a 27-year-relationship with English actress Diana Quick, with whom he has a daughter, actress Mary Nighy. The couple amicably separated in 2008.