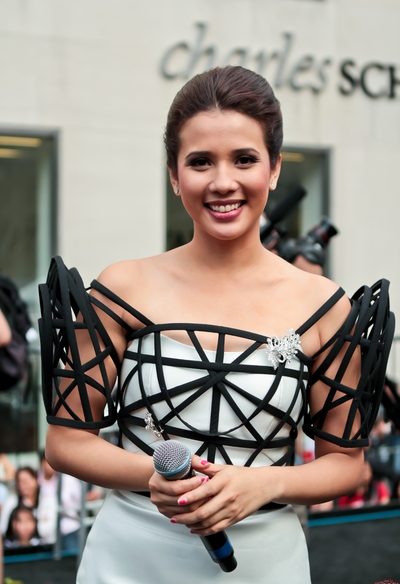 Karylle was born on March 22, 1981  in Manila to Zsazsa Padilla, a singer-actress and Dr. Modesto Tatlonghari. Her parents separated when she was six years old. She has one half-sister Zia Quizon  from her mother's relationship to actor and comedian Dolphy a.k.a. Rodolfo Vera Quizon. She completed her elementary and secondary education, notably in O.B. Montessori Center – Greenhills during grade school (where she was class valedictorian), and Poveda where she finished high school with a Service Medal for extra-curricular and volunteer works. She began taking formal ballet lessons at the age of three and continued until she was fifteen. While she was preparing for her debut album, Karylle had started rehearsals for her first stage musical Little Mermaid where she played Princess Sapphire. In college, Karylle took up B.S. Management major in Communications Technology Management at the Ateneo de Manila University, where she made to the Dean's list and graduated in year 2002. Karylle is also an entrepreneur. She is the owner of the family KTV and resto-bar CenterStage at Tomas Morato in Quezon City, Jupiter in Makati City and Mall of Asia (MOA) in Pasay City and part owner of Mey Lin Restaurant and The Mango Farm dessert kiosk in Greenhills, San Juan City.

She entered the music scene with her first album Time to Shine from Universal Records with the dance single "Can't Live Without You".

Her second album was released on 2005 entitled You Make Me Sing. She wrote the songs "Coz, I Love You" and "Hiling". Also included in the album is the theme song, "Mahiwagang Puso", for her hit fantaserye Encantadia, in which she starred as Sang'gre Alena.

Three years later, she released her third album Time for Letting Go under a new recording company Polyeast Records. With this album, Karylle's gifts as a distinctive powerhouse vocalist is showcased in the single, "I'll Never get Over You Getting Over Me". It is a collection of songs that give the definition of moving on and at the same time divides grief in five different stages. The album also features duet with her mom Zsa Zsa Padilla – "I Live for Your Love" and three of Karylle's original compositions, "Minamahal Kita", "Hulog ng Langit" and the soulful piano-driven "Wala Na Bang Lahat".

Her 4th album, Roadtrip, was released in 2011, in which she ventured out of her comfort zone and produced the album by herself. She wrote eleven tracks in this album which "narrates her personal journey". She had worked on this album for the past four years and according to one of her interviews this album represents who she is, as- the artist, singer, songwriter.

Aside from her albums Karylle also did theme songs for the movies that she starred in. She, together with Jerome John Hughes did "Pagbigyan ang Puso", for Mano Po 3 and a cover of "Sana'y Maghintay ang Walang Hanggan" for the movie Moments of Love.

Another album of Karylle, her 5th which is simply entitled K was launched in November 2013. This one features her dabbling into different genres. The album also includes Karylle's 2013 Philpop entry Sa’yo Na Lang Ako. In 2015, Universal Records released Karylle Songbook containing her first two albums in one CD.