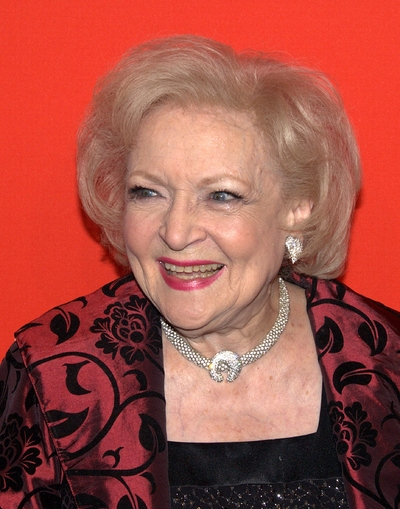 Betty Marion White Ludden (born January 17, 1922), better known as Betty White, is an American actress, comedienne, singer, author and television personality. With a career spanning over seven decades, she currently holds the Guinness World Record for the longest career in TV at 65 years. To contemporary audiences, White is best known for her television roles as Sue Ann Nivens on The Mary Tyler Moore Show and Rose Nylund on The Golden Girls. Since the death of co-star Rue McClanahan in 2010, she is the only surviving Golden Girl. She currently stars as Elka Ostrovsky in the TV Land sitcom Hot in Cleveland for which she has won two consecutive Screen Actors Guild Awards. She currently hosts the practical-joke show Betty White's Off Their Rockers.

Regarded as a television pioneer for being one of the first women in television to have creative control in front of and behind the camera, White has gone on to win six Emmy Awards(five for acting), receiving 20 Emmy nominations over her career, including being the first woman to receive an Emmy for game show hosting (for the short-lived Just Men!) and is the only person to have an Emmy in all female performing comedic categories. In May 2010, White became the oldest person to guest-host Saturday Night Live, for which she received a Primetime Emmy Award. White also holds the record for longest span between Emmy nominations for performances—her first was in 1951 and her most recent was in 2012, a span of 61 years—and has become the oldest nominee as of 2012, aged 90. The actress is also the oldest winner of a competitive Grammy Award, which she won in 2012.

She has made regular appearances on the game shows Password and Match Game and played recurring roles on Mama's Family, Boston Legal,The Bold and the Beautiful, That '70s Show, and Community.

Born Betty Marion White in Oak Park, Illinois, on January 17, 1922, she is the daughter of Tess Curtis (née Cachikis), a homemaker, and Horace Lawrence White, a traveling salesman and electrical engineer. Her mother was of Greek, English, and Welsh descent, and her father was of Danish and English ancestry. White's family moved to Los Angeles, California during the Great Depression. She attended Horace Mann School Beverly Hills and Beverly Hills High School. Hoping to become a writer, she wrote and played the lead in a graduation play at Horace Mann School and discovered her interest in performing.

White began her television career in 1939, three months after high school graduation, when she and a classmate sang songs from The Merry Widow on an experimental Los Angeles channel. White found work modeling, and her first professional acting job was at the Bliss Hayden Little Theatre. White's career was disrupted immediately, as World War II broke out, causing her to join the American Women's Voluntary Services. In the 1940s, she worked in radio appearing on shows such as Blondie, The Great Gildersleeve, and This is Your FBI. She then got her own radio show, called The Betty White Show.

In 1945, White married Dick Barker, a U.S. Army Air Corps pilot. The marriage was short-lived. In 1947, she married Lane Allen, a Hollywood agent. This marriage ended in divorce in 1949.

On June 14, 1963, White married television host and personality Allen Ludden, whom she had met on his game show Password as a celebrity guest in 1961, and her legal name was changed to Betty White Ludden. He proposed to White at least twice before she accepted.