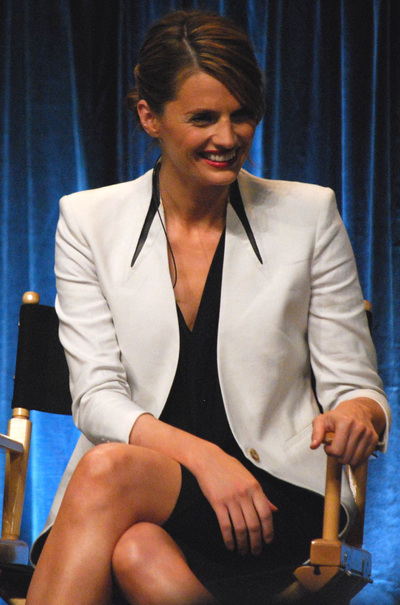 Stana Katic (born April 26, 1978) is a Canadian film and television actress. She is best known for her portrayal of Detective Kate Beckett on the popular ABC series Castle.

Katic was born in Hamilton, Ontario, Canada, to Serbian parents named Petar and Rada, who both emigrated from Croatia. In describing her ethnicity, she has stated her parents are Serbs from Croatia. Her father is from Vrlika, and her mother is from the surrounding area of Sinj. Katic later moved with her family to Aurora, Illinois. She spent the following years moving back and forth between Canada and the United States. After graduating from West Aurora High School in 1996, she studied at the University of Toronto and then at Chicago's Goodman School of Drama, where she studied acting from 2000 to 2002. She has four brothers and one sister.

Katic played Hana Gitelman in Heroes, Collette Stenger in 24 's season 5, and Jenny in the film Feast of Love starring Morgan Freeman. She also played Morgenstern in Frank Miller's film The Spirit, Corrine Veneau in the Bond movie Quantum of Solace (though she was originally up for the role of Strawberry Fields in the film), and Simone Renoir in the third installment of The Librarian franchise, The Librarian: Curse of the Judas Chalice.

At the third annual Shorty Awards held on March 28, 2011, she won the actress category. In May 2011, she won the Most Glamourous Actress online ballot for the Monte-Carlo Television Festival. She received 17.3% of the 3,641 votes against a field of 15 finalists.