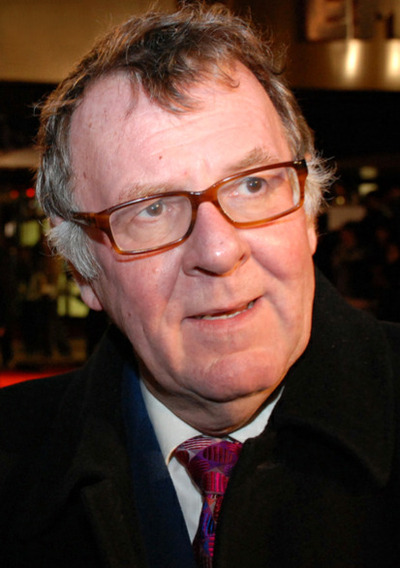 Thomas Geoffrey "Tom" Wilkinson, OBE (born 5 February 1948) is an English actor. He has twice been nominated for an Academy Award, for his roles in In the Bedroom and Michael Clayton. In 2009, he won Golden Globe and Primetime Emmy Awards for Best Supporting Actor in a Miniseries or Film for playing Benjamin Franklin in John Adams.

Wilkinson was born in Leeds, West Riding of Yorkshire, England, the son of Thomas Wilkinson, Sr., a farmer. At the age of four, he moved with his family to Canada, where they lived for several years before returning to England and running a pub in Cornwall. Wilkinson graduated[citation needed] from the University of Kent, where he was a member of T24 Drama Society (then named UKCD) and attended the Royal Academy of Dramatic Art.

Wilkinson currently lives in North London with his wife, actress Diana Hardcastle, and their two children, Alice and Molly.

In 2011, Wilkinson and Hardcastle portrayed husband and wife Joe and Rose Kennedy in the mini series The Kennedys.

Wilkinson made his acting debut in 1976 and worked on several British television series, most notably the mini-series First Among Equals (1986). He first gained critical acclaim with his appearance as Mr. Pecksniff, in the BBC’s 1994 adaptation of Martin Chuzzlewit. He made only the occasional film, including a brief appearance in 1995’s Sense and Sensibility and a villain in The Ghost and the Darkness (1996). After becoming part of the ensemble cast of the smash hit The Full Monty in 1997, a role which earned him a BAFTA, he began to take film roles more frequently, including supporting roles in Oscar and Lucinda, Wilde, Shakespeare in Love, and The Patriot.

His portrayal of Matt Fowler, in Todd Field's In the Bedroom, received international praise from critics. For the role, he was named Best Actor of the Year by the New York Film Critics' Circle, and went on to be nominated for the Academy Award for Best Actor. That success was followed up by Eternal Sunshine of the Spotless Mind, Normal, The Exorcism of Emily Rose, Batman Begins, and Separate Lies.

In 2007, Wilkinson played the manic depressive attorney Arthur Edens in Michael Clayton and garnered much critical acclaim and a nomination for the Academy Award for Best Supporting Actor. The same year, he played an uncle planning for murder in Woody Allen’s Cassandra's Dream.

Wilkinson received a Doctor of Letters honorary degree from the University of Kent in July 2001.

In the 2005 New Year Honours, he was appointed Officer of the Order of the British Empire (OBE) "for services to Drama".