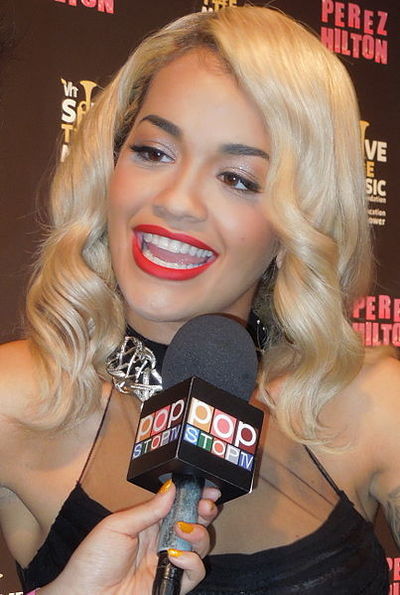 Rita Sahatçiu Ora (born 26 November 1990) is a British singer-songwriter and actress. Her debut studio album, Ora (2012), debuted at number one in the United Kingdom, and spawned the number-one singles "R.I.P." and "How We Do (Party)". After reaching the peak position as a featured act on DJ Fresh's "Hot Right Now", Ora became the artist with the most number-one singles on the UK Singles Chart in 2012. Ora has a mezzo-soprano vocal range. She was nominated for three awards at the 2013 BRIT Awards, including the Brit Award for Best British Breakthrough Act. "I Will Never Let You Down" debuted atop the UK Singles Chart in 2014, scoring her fourth UK number 1, tying with Geri Halliwell for the most UK number 1's by a solo female artist.

Rita Ora was born in 1990 in Pristina, Kosovo to Kosovar-Albanian parents and moved to the United Kingdom when she was a year old. She grew up around Portobello Road in West London, and attended St Cuthbert with St Matthias CE Primary School in Earls Court, following which she graduated from Sylvia Young Theatre School and then St Charles Catholic Sixth Form College. She began singing from an early age.

Her mother, Vera, is a psychiatrist, and her father, Besnik, is a pub owner. Ora has an older sister, Elena, and a younger brother, Don. She was named after her film director grandfather, Besim Sahatçiu’s, favourite film star, Rita Hayworth.

In 2007, Rita Ora had her first music release when she appeared on Craig David's track titled "Awkward", and then again in 2008 on "Where's Your Love", featuring Tinchy Stryder, for which she also appeared in the music video. She featured on two songs of James Morrison's album, Songs for You, Truths for Me, as backing vocalist. Ora began singing in bars in and around London. She auditioned for Eurovision: Your Country Needs You on BBC One to be the British contestant for the 2009 Eurovision Song Contest but later withdrew from the competition after a few episodes as she did not feel ready. Her manager, Sarah Stennett (who also worked with Ellie Goulding, Jessie J and Conor Maynard), later told Hit Quarters that Ora had entered the competition because at the time she felt it was her only chance at finding success. Her withdrawal followed her first meeting with her manager when she was reassured that she had genuine potential to make it as a solo artist and that performing in Eurovision would hinder rather than help her chances. Stennett got in touch with Jay Brown of Roc Nation and told him about Ora. Brown asked Ora to fly out to New York where she met with Jay-Z, the founder of the label. Ora signed with Roc Nation in December 2009, within 48 hours of her arrival to the United States. The same year, she made a cameo on Jay-Z's video for "Young Forever". In 2010, Ora made a cameo on "Over" video by Drake.

Throughout 2011, Ora released covers and videos about working on her debut album on YouTube. The videos caught the attention of DJ Fresh, who at that time was looking for a female vocalist for his song, "Hot Right Now". Ora auditioned for the part and was eventually kept on the track. The single was released on 12 February 2012, reaching number one on the UK Singles Chart. She took two years to completely finish her first studio album. Ester Dean, will.i.am, Drake, The-Dream and Stargate all worked with Ora on her debut album.

In 2004, Ora appeared in the British film Spivs. In 2010, Ora featured in a commercial for "Roc Nation + Skullcandy Aviator Headphones" and one for "CK one Lifestyle brand". On 14 December 2012, Electronic Arts released a press statement announcing that Rita Ora will be a character in the The Sims 3: Seasons video game. In 2013 Ora appeared as a guest star in 90210 as well as appearing as a racer in the film Fast & Furious 6. Ora was featured on Jay-Z's Made in America, a Ron Howard-directed documentary about the Budweiser Made in America Festival, which premiered on 7 September at the 2013 Toronto International Film Festival. In April 2014, Ora appeared alongside Korean pop star Hyuna in an episode of Funny or Diecalled "Girl, You Better Walk".

She will portray Christian Grey's sister, Mia, in the film adaptation of the best-selling novel Fifty Shades of Grey. Filming started in December 2013, with a release set for February 2015. Ora originally approached the production hoping to jump on the film’s soundtrack.

Ora is of Kosovar-Albanian ethnicity and speaks some Albanian. She possesses a mezzo-soprano vocal range.

Asked about her religion, Ora stated:

I believe in God and I’m of Muslim culture, but my parents never forced me. Above all, they raised me with the idea that I could make my own choices and have my own beliefs.

Previously linked with Bruno Mars and Rob Kardashian, Ora started dating Calvin Harris in May 2013. In June 2014, Harris revealed that they had split up.

She used to live in Kensington, London, but in January 2014 left and moved in with her sister.