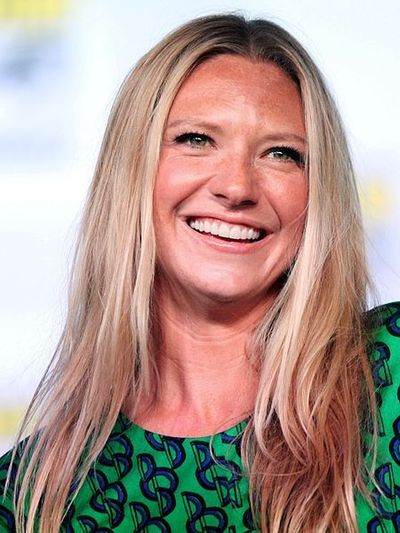 Anna Torv (born 7 June 1979) is an Australian actress known for her role as FBI agent Olivia Dunham on the Fox television series Fringe (2008–2013).

Torv was born in Melbourne, Victoria, the daughter of Susan (née Carmichael) and Hans Torv, and grew up in Gold Coast, Queensland. Her father is of Estonian descent, but was born in Stirling, Scotland. Her mother is of Scottish descent. She is estranged from her father. She has a younger brother, Dylan. Her paternal aunt is writer Anna Murdoch Mann, who was married for 31 years to media mogul Rupert Murdoch, and her cousins are James, Lachlan and Elisabeth Murdoch.

Torv graduated from Benowa State High School in 1996. She graduated from Australia's National Institute of Dramatic Art (NIDA) with a degree in Performing Arts in 2001.

In 2003, Torv played the role of Ophelia with the Bell Shakespeare Company in John Bell's production of Hamlet.

In 2004, she joined the cast of Australia's acclaimed television drama The Secret Life of Us playing Nikki Martel. Torv appeared in the BBC series Mistresses. She also voiced "Nariko" in the 2007 video game Heavenly Sword.

From 2008 to 2013, Torv played Agent Olivia Dunham in the American television series Fringe. She received an Australians in Film Breakthrough award in 2009. Torv appeared as Virginia Grey on HBO's mini-series The Pacific. She has been nominated five times for the Saturn Award for Best Television Actress from 2009 to 2013, winning a total of four. Torv starred in a CollegeHumor Original video as a tyrannical traffic cop.

On 30 October 2013, a trailer was shown for the Heavenly Sword Movie. Anna will be reprising her role as Nariko in the movie.

In December 2008, Torv married her Fringe co-star Mark Valley. They separated after one year of marriage.