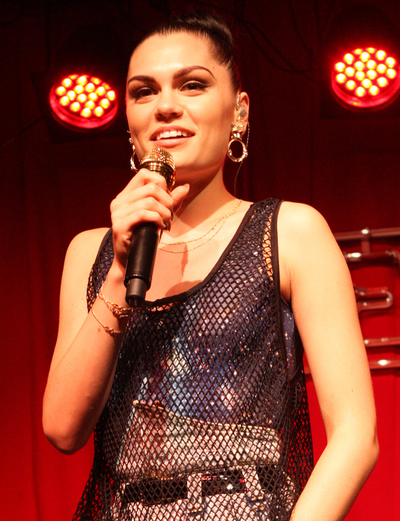 Jessica Ellen Cornish (born 27 March 1988), better known by her stage name Jessie J, is an English singer and songwriter. Born and raised in London, she began her career on stage, aged 11, with a role in the West End musical Whistle Down the Wind. She studied at the BRIT School before signing with Gut Records and striking a songwriting deal with Sony/ATV Music Publishing where she wrote for artists including Chris Brown and Miley Cyrus.

After signing with Universal Republic, Jessie J came to prominence following the release of her debut single "Do It Like a Dude". Her next song "Price Tag" topped the charts in nineteen countries including the UK and was followed by the release of her debut album Who You Are (2011), which charted at number two in the UK. Other releases from the album included "Nobody's Perfect", and "Who You Are", "Domino" and "Laserlight", which all charted within the top 10 in the UK Singles Chart, making Jessie J the first British female artist to have six top ten singles from a studio album. "Domino" also resulted in further international chart success, peaking at number six on the US Billboard Hot 100 and becoming her second number-one single in the UK. In 2012 Jessie J performed at the Queen's Diamond Jubilee Concert outside Buckingham Palace in June, as well as the closing ceremony of the 2012 Olympic Games in London on 12 August.

Her second album Alive (2013) reached the top 5 in the UK Albums Chart and also included the top-five hit songs "Wild" and "It's My Party". The release of her third album Sweet Talker (2014) was preceded by the single "Bang Bang" which debuted at number one in the UK and went multi-platinum worldwide. The album made the top 5 in the UK and reached number 10 on the US Billboard 200, her highest-charting album in the US. As of January 2015, Jessie J had sold over 20 million singles and 3 million albums worldwide.

Citing various influences, Jessie J is recognised for an unconventional musical and performance style that mixes soul vocals with contemporary R&B, pop, electropop, and hip-hop beats. Jessie J has garnered various awards and nominations for her music, including the 2011 Critics' Choice Brit Award and the BBC's Sound of 2011. Jessie J has supported various charitable causes, and has appeared on the UK charity telethons BBC Children in Need and Comic Relief. She has served as coach and mentor on the television shows The Voice UK and The Voice Australia.

Jessica Ellen Cornish was born in London, to Rose (née Archer) and Stephen Cornish. She was educated at Mayfield High School in the London Borough of Redbridge. She attended Colin's Performing Arts School and as an 11-year-old she was cast in Andrew Lloyd Webber's West End production of Whistle Down the Wind. She subsequently joined the National Youth Music Theatre and appeared in their 2002 production of The Late Sleepers.

Cornish has two sisters, who are five and seven years older than she is, who were both head girls at school. Unlike her academic sisters, Cornish has stated she was "never really that good at anything". She said, "At school they were like 'oh, you're a Cornish girl' and they kind of expected me to be the same as my sisters. Give me something to draw or an outfit to pick for someone, or hair, make-up, acting, write a song, I'm fine with it, but anything to do with sums – it was never my thing." She also said she never based her intelligence on her exam results. She also said she was always good at singing and it was her "thing". In 2003, aged 15, she won Best Pop Singer in the TV show Britain's Brilliant Prodigies, performing as Jessica Cornish. At the age of 16 she began studying at the BRIT School and at 17 she joined a girl group named Soul Deep. She graduated in the class of 2006 along with singers Adele and Leona Lewis. At 18, she claims she suffered a 'minor stroke.' As for her stage name..."To be honest, there’s no real reason for the ‘J’ in my stage name".

Jessie J was signed to Gut Records, recording an album for the label, but the company went bankrupt before any material was released. She then found success as a songwriter, gaining a Sony ATV publishing contract. She was also the support act for Cyndi Lauper during Lauper's UK dates of her 2008 Bring Ya to the Brink tour (Lauper invited J to join her on stage for the performances of "Girls Just Want To Have Fun"). Jessie has also written lyrics for artists such as Chris Brown and Miley Cyrus, including "Party in the U.S.A.". Jessie J was also part of a girl band, called Soul Deep, for two years, however, believing "it wasn't going anywhere," she left the group. Despite people thinking that her first notoriety was through YouTube, Jessie was signed for four years before her first video was posted. Jessie first came to the attention of Lava Records when her publisher at Sony/ATV, Rich Christina, sent Lava president Jason Flom a link to her MySpace page, which the record executive loved. After seeing an impressive US showcase, Lava, along with several other labels, was keen to sign the artist but progress was hampered by her management's insistence on, what Flom called, a "crazy deal", and their refusal to let Jessie speak to any labels directly. Despite this, Senior Director of A&R at Lava, Harinder Rana, made surreptitious efforts to meet Jessie on her own in winter of 2008. Later in the year a change in management to Sarah Stennett and Nadia Khan of Crown Music allowed record deal negotiations to take place. Jessie eventually signed with Lava as part of a joint venture with Universal Republic.

Jessie J began recording her debut studio album in 2005 and it was completed on 19 January 2011. She revealed that "Big White Room" would be on the album and was written from an experience she had when she was 11 years old, although she wrote the song at age 17, in hospital, where a ward mate, a little boy, died.[25] Jessie J says the album's title track, "Who You Are", is one of her proudest creations, she said the song is a "positive role model for young people" and "I always say that I'm half-artist, half-therapist". A song called "Sexy Silk", which appears on the Easy A soundtrack, was originally going to be her first single. However, in late 2010 Jessie J released her first single, "Do It Like a Dude" which was co-written with George Astasio, Tj Normandin, Jason Pebworth, Jon Shave, Kyle Abrahams and Peter Ighile. Originally, she wrote the song with Rihanna in mind because "Rude Boy" was released at the time, partly inspiring the song. She then sent the song to her label, Island Records, before sending it to Rihanna's management. Island insisted the song become Jessie J's first single. She wishes to perform the song with Rihanna at one point. The single gained positive reception from critics. The single charted at number two on the UK Singles Chart. Her follow-up single "Price Tag" was released in late January 2011. It was written by Jessie J, Dr. Luke, Claude Kelly, and B.o.B and peaked at number one on the UK Singles Chart. "Price Tag" was released in the US on 1 February 2011 and peaked at 23 on the Billboard Hot 100. "Price Tag" also charted at number-one in New Zealand and Ireland and is the most successful online video J has released. Her first American television appearance was as the musical guest on NBC's Saturday Night Live on 12 March 2011.

On 25 February 2011 her debut album, Who You Are, was released. The album first entered the UK Albums Chart on 6 March 2011 where it charted at number two. The album charted into the top ten in a number of countries and number 11 in the US. After the release she went on to release a third single from the album, "Nobody's Perfect". MTV reported that the single is, so far, only confirmed for release in the United Kingdom. The album's fourth single was "Who's Laughing Now". "Domino" was her second US single. The Dr. Luke-produced track was sent to mainstream radio on 6 September 2011. With the success of Who You Are in North America, Jessie was chosen to tour as the opening act for American pop artist Katy Perry's California Dreams Tour in 2011 but pulled out after breaking her foot in rehearsals. Jessie J served as the house artist at the 2011 MTV Video Music Awards, performing several of her original songs along with covers around commercial breaks.

Although Jessie J was first identified as a soul singer, she primarily records songs of R&B and pop music with hip hop influences. Music critic Matthew Perpetua of Pitchfork Media compared Jessie J to her peers Adele and Amy Winehouse, but suggested she was missing something: "Whereas Adele and Winehouse also have powerhouse voices, they fit into clear aesthetic niches and invest their songs with depth and humanity. Jessie J doesn't have even a fraction of their restraint." Perpetua added: "Her idea of showcasing her gift is to shoot for a blaring melisma on "Mamma Knows Best" that makes Christina Aguilera seem as subtle as Joni Mitchell by comparison."

Ailbhe Malone of the music magazine NME also recognised Cornish's "undeniably potent voice". However, she pointed out the possible "identity crisis" that might have been caused by Jessie's songwriter past: "This is an album of singles for other artists. There’s Rihanna Jessie ('Do It...'), Perry Jessie ('Abracadabra'), Pixie Jessie ('Mamma Knows Best'), Ellie Jessie ('Big White Room')." Caroline Sullivan of The Guardian shared her positive opinion about the singer, saying that "if any singer has the potential to be the British Katy Perry or Pink, with the accompanying millions of sales, it's her". Sullivan also complimented Cornish's attitude: "[Her songs] are delivered with a confidence that money can't buy." Jessie J. has been compared to Katy Perry, and has expressed admiration for Perry's music and her work ethic.. She said, "Her hard work, her dedication, and how she deals with having the world stare at her every move, personally and professionally, with such dignity and strength, is inspiring."

In early 2011, Jessie J suffered a panic attack on stage after she was forced to perform in the dark. "I did a gig recently and had a panic attack on stage," she told NOW. "The night was called 'Black Out' and I had to perform in the dark. I asked them to turn on the lights and they didn't. I was onstage in pitch black and, because I couldn't see anything, I started to panic. It was awful."

Asked about her bisexuality in an interview on the "In Demand" radio show on 3 March 2011, Jessie J stated, "I've never denied it. Whoopie doo guys, yes, I've dated girls and I've dated boys – get over it." Sophie Wilkinson of The Guardian argued that Jessie J's sexuality was valuable to young teens, especially for young girls unsure of themselves because of their sexuality and identity, to feel "that this does happen and this is normal." In April 2014, Jessie J renounced her bisexuality in an interview with Daily Mirror's "3am" celebrity tabloid; "For me, it was a phase. But I'm not saying bisexuality is a phase for everybody", she said.