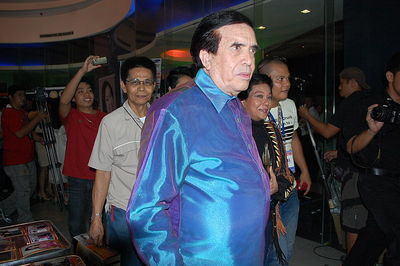 German Moreno (born October 4, 1943 in Manila,Philippines), also known as Kuya Germs or the Master Showman, is a Filipino television host, actor, comedian and talent manager popular during the 1980s. He was born to a Filipino father of Spanish descent and a Filipino mother.

Moreno became involved in the entertainment industry working as a janitor and telonero (curtain raiser) of Clover Theater. He later went on to pursue a career as a comedian of the bodabil stage and the post-war screen. His biggest break came on television in the late 1970s when he became host of the Sunday noontime variety show, GMA Supershow. He eventually became the host and producer of That's Entertainment, a youth-oriented variety show. Currently, he is hosting a late-night show entitled Walang Tulugan with the Master Showman.