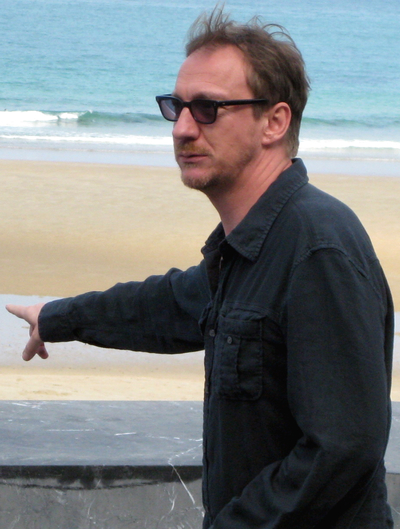 David Thewlis (né David Wheeler; born 20 March 1963) is an English actor of stage and screen. His most commercially successful role to date has been that of Remus Lupin in the Harry Potter film series. Other notable performances include his work in the films Naked (1993), Timeline (2003), Kingdom of Heaven (2005), The Omen (2006), The Boy in the Striped Pyjamas (2008), London Boulevard (2010) and War Horse (2011). He made his name known in 1993 with his performance of Johnny in Naked and with his performance of main antagonist King Einon in the 1996 film Dragonheart. He has also done voice work in the films James and the Giant Peach (1996) and The Miracle Maker (2000).

Thewlis, second of three children, was born David Wheeler in Blackpool, Lancashire, the son of Maureen (née Thewlis) and Alec Raymond Wheeler. Both parents worked at his father's shop. As a teenager, he played in a rock band called QED, and played lead guitar with a punk rock band called Door 66. He was educated at Highfield High School, a state secondary school in Marton, Blackpool. Later, he enrolled in the Guildhall School of Music and Drama in London, graduating in 1984.

He had a minor role in an episode of the 1980s sitcom Up the Elephant and Round the Castle. His first professional role was in the play Buddy Holly at the Regal in Greenwich. His first major film role was as the rambling street philosopher Johnny in Naked (1993; dir. Mike Leigh), for which he was named best actor by the National Society of Film Critics (United States), the London Film Critics Circle, the Evening Standard, the New York Film Critics' Circle and the Cannes Film Festival. The same year, he appeared on television as a sexual predator named James Jackson in Prime Suspect 3, opposite Helen Mirren and Ciarán Hinds. Prior to this, his first television appearance was alongside Ken Jones in Valentine Park. Through the 1990s, he appeared in a variety of films, mostly fantasy and period, including Restoration (1995), Black Beauty (1994), Total Eclipse (1995) with Leonardo DiCaprio, The Island of Dr. Moreau (1996), Dragonheart (1996) and Seven Years in Tibet (1997), opposite Brad Pitt. He was nominated for a British Independent Film Award for Divorcing Jack (1998), and played Clov in a (2000) television film of Samuel Beckett's Endgame. Notable appearances also include Bernardo Bertolucci's Besieged (1998) and Paul McGuigan's Gangster No. 1 (2000), opposite Paul Bettany and Malcolm McDowell.

In 1992, Thewlis married director Sara Sugarman; they divorced in 1994. He then had a brief relationship with Bill Oddie's daughter Kate Hardie. In 2001, he began a relationship with actress Anna Friel, whom he met on a flight to Cannes. They have one child together. Friel and Thewlis ended their relationship in late 2010, after almost a decade.