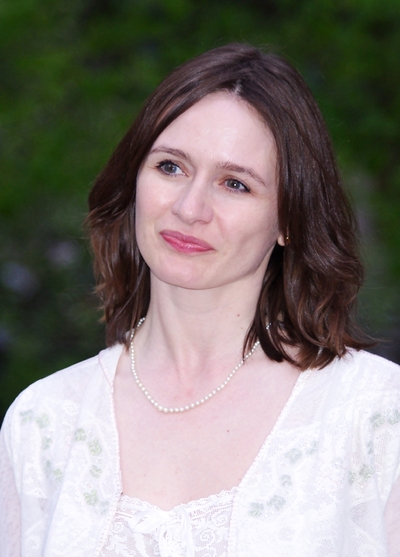 Emily Kathleen A. Mortimer (born 1 December 1971) is an English actress. She began performing on stage, and has since appeared in several film and television roles, including 30 Rock, Scream 3, Match Point, Lars and the Real Girl, Hugo, Cars 2, Shutter Island, Harry Brown and The Newsroom.

Mortimer was born in Finsbury Park, London England, a daughter of Sir John Mortimer, QC (a lawyer and writer who created Rumpole of the Bailey) and his second wife, Penelope (née Gollop). She has a younger sister, Rosie; two older half-siblings, Sally Silverman and Jeremy, by her father's first marriage, to author Penelope Fletcher; and a half-brother, Ross Bentley, by her father's liaison with actress Wendy Craig.

Mortimer studied at St Paul's Girls' School in west London (she was in the year below actress Rachel Weisz), where she appeared in several pupil productions. She then went on to Oxford University, where she read Russian at Lincoln College and performed in several plays. Before becoming an actress, Mortimer wrote a column for the Daily Telegraph, and was also screenwriter for an adaptation of Lorna Sage's memoir, Bad Blood.

Mortimer performed in several plays while studying at Oxford University, and while acting in a student production she was spotted by a producer who later cast her in the lead in a television adaptation of Dame Catherine Cookson's The Glass Virgin (1995). Subsequent television roles included Sharpe's Sword and Coming Home. Her first film role was opposite Val Kilmer in 1996's The Ghost and the Darkness. Mortimer was then in the Irish coming-of-age story The Last of the High Kings, released later the same year.

In 2000, Mortimer met American actor Alessandro Nivola, while both were starring in Love's Labour's Lost. The couple married in the Chilterns, Buckinghamshire, on 3 January 2003. A Mexican punk band performed at their wedding. Mortimer gave birth to their son, Samuel John, in Westminster, London, on 23 September 2003. Their second child, May Rose, was born on 15 January 2010. During the same year, Mortimer naturalised as an American citizen for "cynical reasons" in order to avoid paying inheritance tax in the event of anything happening to her husband. Mortimer is anatheist.