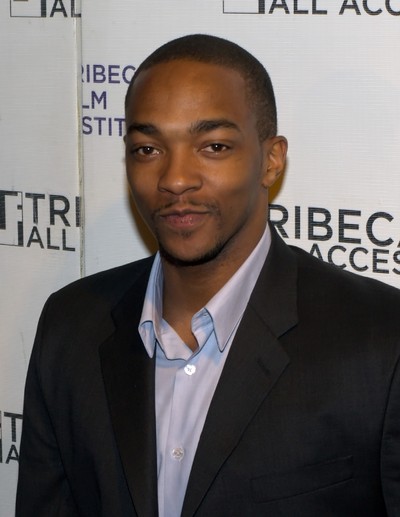 Anthony Dwane Mackie (born September 23, 1978) is an American actor. He has been featured in feature films, television series, and Broadway and Off-Broadway plays, including Ma Rainey's Black Bottom, Drowning Crow, McReele, A Soldier's Play, and Carl Hancock Rux's Talk, for which he won an Obie Award in 2002.

In 2002, he was featured in Eminem's debut film, 8 Mile. He was nominated for Independent Spirit Award for Best Actor for his role in Brother to Brother. His second nomination was for Best Supporting Actor at the 2009 Independent Spirit Awards for his role in The Hurt Locker. In 2014, he joined the Marvel Cinematic Universe as Sam Wilson / Falcon, making his first appearance in Captain America: The Winter Soldier.

Mackie was born in New Orleans, Louisiana, the son of Martha (née Gordon) and Willie Mackie, Sr., a carpenter who owned a roofing business, Mackie Roofing. He attended the New Orleans Center for Creative Arts (NOCCA) and graduated from the high school drama program at the North Carolina School of the Arts (NCSA) in 1997. He later graduated from the Juilliard School's Drama Division as a member of Group 30 (1997–2001), which also included actors Tracie Thoms and Lee Pace.

In 2002, Mackie worked as an understudy to Don Cheadle in Suzan-Lori Parks' play Topdog/Underdog and won an OBIE Award for his role in Carl Hancock Rux's play Talk. His first starring role in a feature film was in the 2003 independent film Brother to Brother, where he played Perry, a young African-American artist who struggles to adjust to the world as a black homosexual. He appeared in the 2002 film 8 Mile, as Papa Doc, Eminem's nemesis. Mackie would later go on to star as a man who struggles to adjust to the world he's created after becoming a corporate whistleblower and later starting a business impregnating lesbians for a fee in Spike Lee's 2004 film She Hate Me.

In 2006, Mackie starred in Half Nelson alongside Ryan Gosling and Shareeka Epps as well as We Are Marshall.

Mackie portrayed the rapper Tupac Shakur in the 2009 film Notorious. He first played Shakur on Off-Off Broadway (while still at Juilliard) in 2001 in the play Up Against the Wind, which also featured his classmate Thoms. Other films in the works include biopics of Olympian Jesse Owens, Antebellum slave revolt leader Nat Turner, and cornetist and jazz musician Buddy Bolden.

In the summer of 2009, he played the role of Pentheus in the New York City Public Theater's Shakespeare in the Park production of The Bacchae.

He starred with Christopher Walken in A Behanding in Spokane on Broadway, which opened February 15, 2010. Mackie also narrated The Best That Never Was, director Jonathan Hock's documentary for the ESPN 30 for 30 series about the Philadelphia, MS native and football star Marcus Dupree. He appeared in the 2011 Matt Damon film The Adjustment Bureau where he plays Harry Mitchell, a sympathetic member of a shadowy supernatural group that controls human destiny. Mackie co-starred, as the Falcon, in the Marvel Studios sequel Captain America: The Winter Soldier (2014). He reprised the role in 2015's Avengers: Age of Ultron and Ant-Man, and will again in 2016's Captain America: Civil War.

Mackie and his longtime girlfriend, Sheletta Chapital, married in December 2014. They have three children together. He opened a bar called NoBar in Brooklyn, New York in the summer of 2011.

His brother, Calvin Mackie, was an Associate Professor at Tulane University.