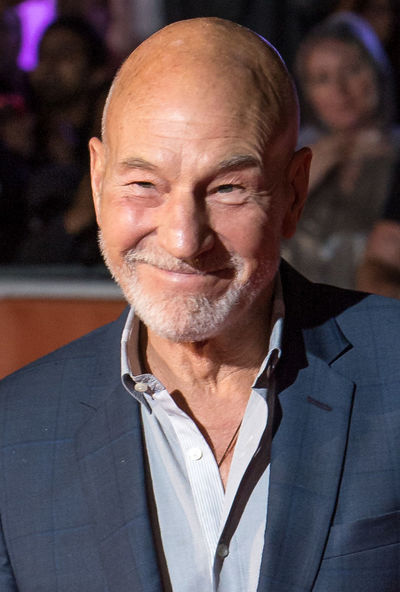 Sir Patrick Stewart OBE (born 13 July 1940) is an English actor whose career has included roles on stage, television, and film. Beginning his career with a long run with the Royal Shakespeare Company, his first major screen roles were in BBC-broadcast television and film during the mid-late 1970s, including Hedda and the miniseries I, Claudius. In the 1980s, he began working in American television and film, with roles as Captain Jean-Luc Picard in Star Trek: The Next Generation and its successor films, as Professor Charles Xavier in the X-Men series of superhero movies, the lead of the Starz TV series Blunt Talk, and voice roles such as CIA deputy director Avery Bullock in American Dad!. In 1993, TV Guide named him the best dramatic television actor of the 1980s.

Patrick Stewart was born on 13 July 1940 in Mirfield, in the West Riding of Yorkshire, England, to Gladys (née Barrowclough), a weaver and textile worker, and Alfred Stewart, a Regimental Sergeant Major in the British Army. He has two older brothers, Geoffrey (b. 28 January 1925, Mirfield) and Trevor (b. 10 August 1935, Mirfield).

Stewart grew up in a poor household with domestic violence from his father, an experience which later influenced his political and ideological beliefs. He spent much of his childhood in Jarrow. Stewart's father served with the King's Own Yorkshire Light Infantry and was Regimental Sergeant Major of the 2nd Battalion, Parachute Regiment during the Second World War, having previously worked as a general labourer and as a postman. As a result of his wartime experience during the Dunkirk evacuation, his father suffered from what was then known as combat fatigue (related to what is now known as post-traumatic stress disorder). In a 2008 interview, Stewart said, "My father was a very potent individual, a very powerful man, who got what he wanted. It was said that when he strode onto the parade ground, birds stopped singing. It was many, many years before I realized how my father inserted himself into my work. I've grown a moustache for Macbeth. My father didn't have one, but when I looked in the mirror just before I went on stage I saw my father's face staring straight back at me."

Stewart attended Crowlees Church of England Junior and Infants School. He attributes his acting career to an English teacher named Cecil Dormand who "put a copy of Shakespeare in my hand [and] said, 'Now get up on your feet and perform.'" In 1951, aged 11, he entered Mirfield Secondary Modern School, where he continued to study drama. At age 15, Stewart left school and increased his participation in local theatre. He acquired a job as a newspaper reporter and obituary writer at the Mirfield & District Reporter, but after a year, his employer gave him an ultimatum to choose acting or journalism. He quit the job. His brother tells the story that Stewart would attend rehearsals during work time and then invent the stories he reported. Stewart also trained as a boxer. He lost his hair at the age of 18 due to suffering from Alopecia areata. The traumatic experience made Stewart timid, and he found that acting served as a means of self-expression.

Stewart and fellow Yorkshire actor Brian Blessed have been close friends since childhood, meeting at a Mytholmroyd drama course when Stewart was 11 or 12. Both boys later received grants to attend Bristol Old Vic Theatre School.

Following a period with Manchester's Library Theatre, he became a member of the Royal Shakespeare Company in 1966, remaining with them until 1982. He was an Associate Artist of the company in 1968. He appeared with actors such as Ben Kingsley and Ian Richardson. In January 1967, he made his debut TV appearance on Coronation Street as a Fire Officer. In 1969, he had a brief TV cameo role as Horatio, opposite Ian Richardson's Hamlet, in a performance of the gravedigger scene as part of episode six of Sir Kenneth Clark's Civilisation television series. He made his Broadway debut as Snout in Peter Brook's legendary production of A Midsummer Night's Dream, then moved to the Royal National Theatre in the early 1980s. Over the years, Stewart took roles in many major television series without ever becoming a household name. He appeared as Vladimir Lenin in Fall of Eagles; Sejanus in I, Claudius; Karla in Tinker Tailor Soldier Spy and Smiley's People; Claudius in a 1980 BBC adaptation of Hamlet. He even took the romantic male lead in the 1975 BBC adaptation of Elizabeth Gaskell's North and South (wearing a hairpiece). He also took the lead, playing Psychiatric Consultant Dr Edward Roebuck in BBC's Maybury in 1981. Stewart continued to play minor roles in films, such as King Leondegrance in John Boorman's Excalibur (1981), the character Gurney Halleck in David Lynch's film version of Dune (1984) and Dr. Armstrong in Tobe Hooper's Lifeforce (1985).

Stewart preferred classical theatre to other genres, asking Doctor Who actress Lalla Ward why she would work in science fiction or on television. In 1987 he nonetheless agreed to work in Hollywood on a revival of an old science-fiction television show, after Robert H. Justman saw him while attending a literary reading at UCLA. Stewart knew nothing about the original show, Star Trek, or its iconic status in American culture. He was reluctant to sign the standard contract of six years but did so as he, his agent, and others with whom Stewart consulted, all believed that the new show would quickly fail, and he would return to his London stage career after making some money.

Star Trek: The Next Generation

When Stewart began his role as Captain Jean-Luc Picard in Star Trek: The Next Generation (1987–94), the Los Angeles Times called him an "unknown British Shakespearean actor". Still living out of his suitcase because of his scepticism that the show would succeed, Stewart was unprepared for the long schedule of television production that began at 4:45 am each day. He initially experienced difficulty fitting in with his less-disciplined castmates, stating that his "spirits used to sink" when required to memorise and recite technobabble. Stewart eventually came to better understand the cultural differences between the stage and television, and his favourite technical line became "space-time continuum". He remained close friends with his fellow Star Trek actors and became their advocate with the producers when necessary. Marina Sirtis credited Stewart with "at least 50%, if not more" of the show's success because others imitated his professionalism and dedication to acting.

Stewart unexpectedly became wealthy because of the show's great success. In 1992, during a break in filming, Stewart calculated that he earned more during that break than from 10 weeks of Woolf in London. From 1994 to 2002, he also portrayed Picard in the films Star Trek Generations (1994), Star Trek: First Contact (1996), Star Trek: Insurrection (1998) and Star Trek: Nemesis (2002); and in Star Trek: Deep Space Nine's pilot episode "Emissary", and received a 1995 Screen Actors Guild Award nomination for "Outstanding Performance by a Male Actor in a Drama Series".

When asked in 2011 for the highlight of his career, he chose Star Trek: The Next Generation, "because it changed everything [for me]." He has also said he is very proud of his work on Star Trek: The Next Generation, for its social message and educational impact on young viewers. When questioned about the significance of his role compared to his distinguished Shakespearean career, Stewart has said that: "The fact is all of those years in Royal Shakespeare Company – playing all those kings, emperors, princes and tragic heroes – were nothing but preparation for sitting in the captain's chair of the Enterprise." The accolades Stewart has received include the readers of TV Guide in 1992 choosing him with Cindy Crawford, of whom he had never heard, as television's "most bodacious" man and woman. In an interview with Michael Parkinson, he expressed gratitude for Gene Roddenberry's riposte to a reporter who said, "Surely they would have cured baldness by the 24th century," to which Roddenberry replied, "In the 24th century, they wouldn't care."

The extreme success of the Star Trek: The Next Generation TV and film franchises, and his iconic role in the series, typecast Stewart as Picard and obtaining other roles became difficult. He also found returning to the stage difficult because of his long departure. Stewart commented that he would never have joined The Next Generation had he known that it would air for seven years: "No, no. NO. And looking back now it still frightens me a little bit to think that so much of my life was totally devoted to Star Trek and almost nothing else."

The main exception where Stewart broke out from the role of Picard came with the X-Men film series, a major superhero film series, in which Stewart plays the pivotal character of Professor Charles Xavier, a character very similar to Picard and himself; "a grand, deep-voiced, bald English guy". He has also since voiced the same role in four video games including: X-Men Legends, X-Men Legends II, and X-Men: Next Dimension.

Stewart first discovered the X-Men series when Lauren Shuler Donner showed him a copy of an X-Men comic.

The very first thing I ever heard about X-Men, the first time I ever heard that title used, was one afternoon when I'd been doing some ADR for [Superman director] Richard Donner, on a movie of his that I had been in. I got a note to call in at Lauren Shuler Donner's office – that's his wife, the producer. I walked in the door, Lauren picked something up from her desk and held it up. And I looked at it, and I said, "What am I doing on the front of a comic book?" And she said, "Exactly."

Stewart reprised his role as Professor Charles Xavier, alongside Ian McKellen as Magneto, and both their younger counterparts (played by James McAvoy and Michael Fassbender, respectively), in the 2014 film X-Men: Days of Future Past; it was helmed by Bryan Singer, who directed the first and second films in the series.

Stewart and his first wife Sheila Falconer divorced in 1990 after 24 years of marriage. They have two children together, son Daniel and daughter Sophia. Daniel is a television actor, and has appeared alongside his father in the 1993 made-for-television film Death Train, and the 1992 Star Trek episode "The Inner Light", playing his son.

In 1997, Stewart became engaged to Wendy Neuss, one of the producers of Star Trek: The Next Generation. They married on 25 August 2000, and divorced three years later.

Four months before his divorce from Neuss, Stewart played opposite actress Lisa Dillon in a production of The Master Builder, and the two were romantically involved until 2007.

In 2008, Stewart began dating Sunny Ozell, a singer and songwriter based in Brooklyn, New York, whom Stewart met while performing in Macbeth at the Brooklyn Academy of Music. Stewart purchased a home in Park Slope, Brooklyn, in August 2012, and subsequently began living there with Ozell. In March 2013, it was reported that Stewart and Ozell were engaged, and they married in September 2013 with Sir Ian McKellen performing the wedding ceremony.