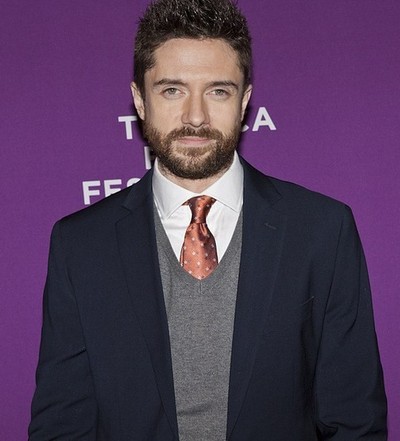 Christopher John "Topher" Grace (/ˈtoʊfər/; born July 12, 1978) is an American actor. He is best known for his portrayal of Eric Forman on the Fox sitcom That '70s Show, Eddie Brock/Venom in the Sam Raimi film Spider-Man 3, Carter Duryea in the film In Good Company and Edwin in the 2010 film Predators.

Grace was born in New York City, New York, the son of Pat, an assistant to the schoolmaster of the New Canaan Country School, and John, a Madison Avenue executive.

Grace grew up in Darien, Connecticut, where he knew actress Kate Bosworth, as well as Opie & Anthony producer Nathaniel Bryan, and was sometimes babysat by actress Chloë Sevigny, who later appeared with him in high school stage plays. Grace chose the name Topher because he did not want his full name abbreviated to Chris at school.

Grace was cast as Eric Forman on Fox's That '70s Show, which debuted in 1998. He played the role until the seventh season. His character was written out and was replaced with a new character named Randy Pearson who was portrayed by Josh Meyers. Grace made a brief guest appearance in the final episode.

Grace plays a prep school student who uses cocaine and introduces his girlfriend to freebasing in director Steven Soderbergh's 2000 film Traffic, as well as having uncredited cameos as himself in Soderbergh's Ocean's Eleven, and its 2004 sequel, Ocean's Twelve. "The joke is that you're supposed to play the worst version of yourself and I don't think too many people are comfortable with that. I never thought for a second that people were really going to think that's what I was like. I think that people will know that I was faking it in those movies," he told Flaunt magazine in 2007. He planned to cameo in Ocean's Thirteen but due to his filming of Spider-Man 3 he had to abandon these plans. As Grace said, "I was doing reshoots on [Spider-Man 3]. I was bummed. I actually talked to Steven Soderbergh about that and we had a thing and then I couldn’t do it." He also appeared in director Mike Newell's 2003 film Mona Lisa Smile.

He dated Ivanka Trump in 2006. He dated his Take Me Home Tonight co-star, Teresa Palmer, in mid- to late 2007. They reunited in 2009 after she broke up with Russell Brand, yet later broke up again.