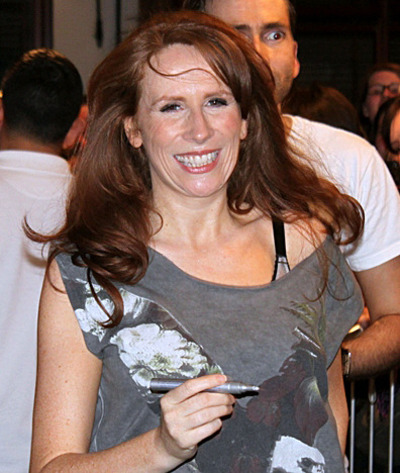 Catherine Tate (born Catherine Ford; 12 May 1968) is an English actress, writer and comedienne. She has won numerous awards for her work on the sketch comedy series The Catherine Tate Show as well as being nominated for an International Emmy Award and seven BAFTA Awards. Following the success of The Catherine Tate Show, Tate played Donna Noble in the 2006 Christmas special of Doctor Who and later reprised her role, becoming the Doctor's companion for the fourth series in 2008. In 2011, she began a recurring role as Nellie Bertram in the US version of The Office and was a series regular until the series ended.

Tate was born in Bloomsbury and brought up in the Brunswick Centre. Her mother, Josephine, was a florist, and Tate has said that the character of Margaret in The Catherine Tate Show, who shrieks at the slightest of disturbances, is based largely on Josephine.

Tate never knew her father, as he left very early on in her life, and consequently, she was brought up in a female-dominated environment, being cared for by her mother, grandmother and her godparents. As a child, Tate suffered from an obsessive-compulsive disorder which centred on word association. For example, Tate was not able to leave a jumper on the floor or it might have brought misfortune to her mother whose name began with the letter "J" like jumper.

She attended St Joseph's Roman Catholic Primary School, Macklin Street, Holborn and Notre Dame High School, Southwark, a south London convent secondary school for girls. By the time Tate was a teenager, she knew she wanted to follow a professional acting career and was subsequently sent to a boys' Roman Catholic school, Salesian College in Battersea at the age of 16 for sixth form as it had the necessary facilities for drama. Tate left school without sitting her A-Levels. She then tried for four years to get a place in the Central School of Speech and Drama (University of London), succeeding on her fourth attempt. She studied there for three years, and until the age of 26, lived in Holborn and Bloomsbury. Prior to getting a place at the Central School of Speech and Drama, Tate went to the Sylvia Young Theatre School, but left after a week; "Even at that age, I realised I wasn't Bonnie Langford. It was very competitive", she stated.