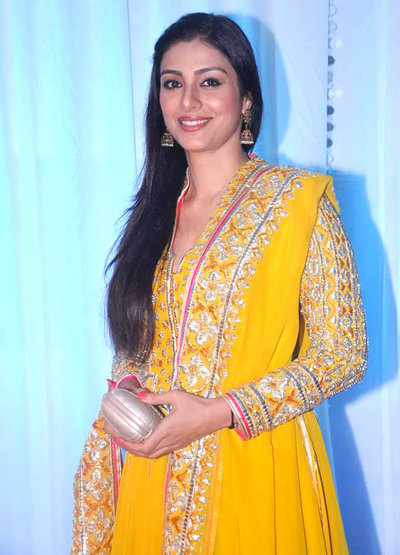 Tabu (born Tabassum Hashmi; 4 November 1971) is an Indian film actress. She has mainly acted in Hindi films, though she has also starred in numerous Telugu, Tamil, Malayalam, Marathi and Bengali language films, as well as Hollywood films. She has won the National Film Award for Best Actress twice, and she holds the record for the most wins of Filmfare's Critics Award for Best Female Performer, with four.

Despite a few exceptions, Tabu is best known for acting in artistic, low-budget films that go on to garner more critical appreciation than substantial box office figures. Her appearances in commercially successful films were few, and her parts in these films were small, such as Border (1997), Saajan Chale Sasural (1996), Biwi No.1 and Hum Saath-Saath Hain: We Stand United (1999). Her most notable performances include Maachis (1996), Virasat (1997), Hu Tu Tu (1999), Astitva (2000), Chandni Bar (2001), Maqbool (2003) and Cheeni Kum (2007). Her leading role in Mira Nair's American film The Namesake also drew major praise. She also co-starred in Ang Lee's film Life of Pi (2012), which was widely acclaimed.

Regarded as one of the most talented Indian female actors of her generation, Tabu is known to be selective about her film roles and has once said, "I do films which move me and most of all, the unit and the director should appeal to me." She was awarded the Padma Shri, India's fourth highest civilian award, in 2011 by the Government of India for her contributions towards the arts.

Tabu was born in Hyderabad to Jamal Hashmi and Rizwana. Soon after, her parents divorced. Her mother was a school teacher and her maternal grandparents were retired professors who ran a school. Her grandfather, Mohammed Ahsan, was a professor of Mathematics, and her grandmother was a professor of English Literature. She went to St. Anns high school in Hyderabad. Tabu moved to Mumbai in 1983 and studied at St. Xavier's College for two years.

She is the niece of Shabana Azmi and Baba Azmi and the younger sister of actress Farah Naaz. She speaks Urdu, Telugu, Hindi and English.

Tabassum "Tabu" Hashmi did a small appearance in the film "Bazaar" in 1980, and later in the film Hum Naujawan (1985) at the age of fourteen; she played Dev Anand's daughter in the film. Her first role as an actress was in the Telugu film Coolie No.1 co-starred with Venkatesh. In December 1987, Boney Kapoor launch two Big Films, Roop Ki Rani Choron Ka Raja and Prem. In Prem, Tabu was signed opposite Sanjay Kapoor. The film took eight years in making and it was a biggest flop in Boney Kapoor's production career. Fortunately Tabu's career took off well after this film in spite of the long delay.

Tabu's first release in Hindi as a leading lady was Pehla Pehla Pyar which went un-noticed. She came into prominence with her role in Vijaypath (1994) opposite Ajay Devgan for which she received the Filmfare Best Female Debut Award. This was followed by many films that did not do well at the box office.

In 1996, Tabu had eight releases. Two films Saajan Chale Sasural and Jeetwent on to be hits; both were within the top five films of that year. Her other significant film, Maachis, was critically acclaimed. Her role as a Punjabi woman caught in the rise of Sikh insurgency was acclaimed; she went on to win her first National Film Award for Best Actress for her performance. The same year saw her major blockbuster films down south. Critically acclaimed Malayalam patriotic film Kalapani directed by Priyadarshan with Mohan Lal and Prabhu Ganesan in the lead roles, brought her laurels for her acting from all across South India. She also debuted in Kollywood through the highly successful Tamil film Kadhal Desam directed by Kathir with Abbas and Vineeth.

Tabu's first release of 1997 was Border. The movie was about the real life events surrounding the Battle of Longewala during the 1971 Indo-Pak war. She played the role of Sunny Deol's wife. Her role was small but the film went on to be the biggest hit of 1997. That year, she also starred in the critically acclaimed film Virasat. The film was a success at the box office; Tabu won the Filmfare Critics Award for Best Performance.

In 1999, she starred in two successful multi-starrer films Biwi No.1 and Hum Saath-Saath Hain: We Stand United. They were the first and second biggest hits of that year respectively.