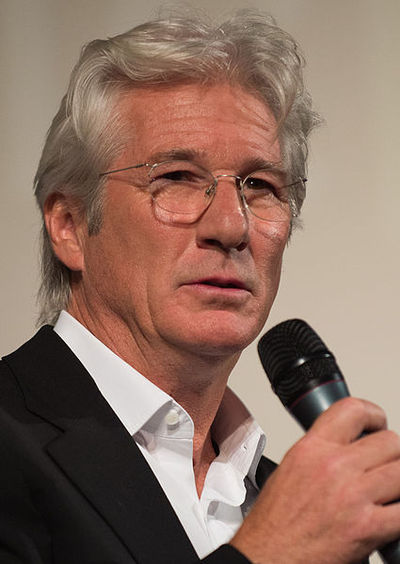 Richard Tiffany Gere (born August 31, 1949) is an American actor and activist. He began acting in the 1970s, playing a supporting role in Looking for Mr. Goodbar and a starring role in Days of Heaven. He came to prominence in 1980 for his role in the film American Gigolo, which established him as a leading man and a sex symbol. He went on to star in several hit films, including An Officer and a Gentleman, Pretty Woman, Primal Fear, Runaway Bride, Arbitrage and Chicago, for which he won a Golden Globe Award as Best Actor, as well as a Screen Actors Guild Award as part of the Best Cast.

Gere was born in Philadelphia, Pennsylvania. His mother, Doris Ann (née Tiffany, born 1924), was a homemaker. His father, Homer George Gere (born 1922), was an insurance agent for the Nationwide Mutual Insurance Company, and had originally intended to become a minister. Gere is their eldest son and second child. His paternal great-grandfather had changed the spelling of the surname from "Geer". His parents were both Mayflower descendants; Gere's ancestors include Pilgrims Francis Eaton, John Billington, George Soule, Richard Warren, Degory Priest, Francis Cooke and William Brewster.

In 1967, Gere graduated from North Syracuse Central High School, where he excelled at gymnastics and music, playing the trumpet. He attended the University of Massachusetts Amherst on a gymnastics scholarship, majoring in philosophy, but did not graduate, leaving after two years.

Gere first worked professionally at the Seattle Repertory Theatre and Provincetown Playhouse on Cape Cod in 1971 where he starred in Rosencrantz and Guildenstern Are Dead. His first major acting role was in the original London stage version of Grease in 1973. He began appearing in Hollywood films in the mid-1970s, playing a small but memorable part in Looking for Mr. Goodbar (1977) and starring in the director Terrence Malick's well-reviewed 1978 film, Days of Heaven. In 1979, Gere was one of the first big-name Hollywood actors to play gay, starring as a homosexual Holocaust victim in the Broadway production of Bent. Gere won a Theatre World Award for his performance. In 1980, he became a major star with the film American Gigolo, followed in 1982 by the romantic drama An Officer and a Gentleman with Debra Winger, which grossed almost $130 million.

Experiencing several box office failures after 1982, Gere's career strengthened with the releases of Internal Affairs and Pretty Woman in 1990. His status as a leading man was solidified and he went on to star in several successful films throughout the 1990s, including Sommersby (1993), Primal Fear (1996) and Runaway Bride (1999) (which reunited him with his Pretty Woman co-star Julia Roberts). He also took a leading role in the 1997 action movie The Jackal, playing Declan Mulqueen.

Richard Gere was named People magazine's "Sexiest Man Alive" in 1999. In 2002, he appeared in three major films, including The Mothman Prophecies, Unfaithful and the Academy Award-winning film version of Chicago, for which he won a Golden Globe as "Best Actor – Comedy or Musical". Gere's 2004 ballroom dancing drama Shall We Dance? was also a solid performer that grossed $170 million worldwide though his next film, Bee Season (2005), was a commercial failure.

Gere was married to supermodel Cindy Crawford from 1991 to 1995. In November 2002, he married model and actress Carey Lowell. They have a son, Homer James Jigme Gere, who was born in February 2000 and is named after Gere's and Lowell's fathers, as well as the Tibetan name Jigme. In September 2013, the two separated after 11 years due to lifestyle differences, and plan to get divorced.

Gere was raised attending a Methodist church. His interest in Buddhism began when he was in his twenties. He first studied Zen Buddhism under Kyozan Joshu Sasaki. After having studied Zen for five or six years, in 1978 he traveled with the Brazilian painter Sylvia Martins to Nepal, where he met many Tibetan monks and lamas. He then met the 14th Dalai Lama in India and became a practicing Tibetan Buddhist of the Gelugpa school of Tibetan Buddhism and an active supporter of the political figure of free Tibet movement Dalai Lama. Gere visits Dharamsala, the headquarters of the Tibetan government-in-exile, regularly.