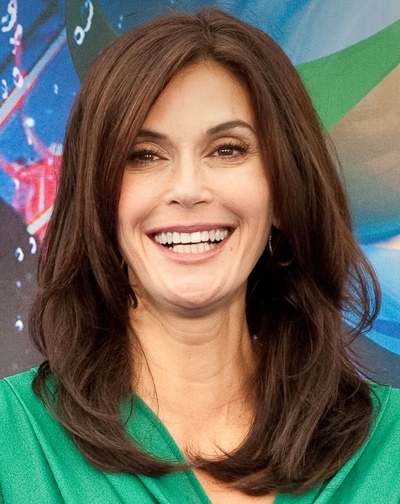 Teri Lynn Hatcher (born December 8, 1964) is an American actress, writer, presenter, and former NFL cheerleader. She is known for her television roles as Susan Mayer on the ABC comedy-drama series Desperate Housewives, and Lois Lane on the ABC comedy-drama series Lois & Clark: The New Adventures of Superman. For her work on Desperate Housewives, she won the Golden Globe Award for Best Actress and three Screen Actors Guild Awards, as well as a Primetime Emmy nomination.

Hatcher was born in Palo Alto, California, the daughter of Esther (née Beshur), a computer programmer who worked for Lockheed Martin, and Owen Walker Hatcher, Jr., a nuclear physicist and electrical engineer. Her father is of Welsh descent (Hatcher has said that he also has Choctaw ancestry) and her mother is of half Syrian and half German-Irish ancestry. Teri Hatcher took ballet lessons at the San Juan School of Dance in Los Altos. Hatcher grew up in Sunnyvale, California. and attended Mango Junior High (now Sunnyvale Middle School), Fremont High School in Sunnyvale and De Anza College in Cupertino. As an undergraduate she studied mathematics and engineering.

In March 2006 Hatcher revealed to Vanity Fair that she was sexually abused from the age of five by Richard Hayes Stone, an uncle by marriage who was later divorced by Hatcher's aunt. She said her parents were unaware of the abuse at the time. In 2002 she assisted Santa Clara County prosecutors with their indictment of Stone for a more recent molestation that led his female victim to commit suicide at the age of 11. Stone pleaded guilty to four counts of child molestation and was sentenced to 14 years in prison. In an interview appearing in Vanity Fair, Hatcher said she told the prosecutors about her own abuse because she was haunted by thoughts of the 14-year-old girl who shot herself, and feared Stone might escape conviction. Stone died of colon cancer on August 19, 2008, having served six years of his sentence.

Hatcher studied acting at the American Conservatory Theater. One of her early jobs (in 1984) was as an NFL cheerleader with the San Francisco 49ers. From September 1985 to May 1986 she joined the cast of the TV series The Love Boat, playing the role of "Amy", one of the "Mermaid" showgirls. From 1986 to 1989, she appeared in the recurring role of "Penny Parker" opposite Richard Dean Anderson's eponymous hero on the TV series MacGyver. In 1987, she played the daughter of Patty Duke's lead character in the short-lived Fox comedy Karen's Song. In 1988, she made a guest appearance in Star Trek: The Next Generation as Lt. Robinson. In 1989, she guest-starred in an episode of Quantum Leap titled "Star Crossed". In 1992, Hatcher tried out for the role of Jamie Buchman on Mad About You and made it to the final two choices, but lost the part to future emmy winner Helen Hunt.

Hatcher landed a starring role of Daily Planet reporter Lois Lane (opposite Dean Cain) in Lois & Clark: The New Adventures of Superman from 1993 to 1997. At the height of the show's popularity in 1995, a picture of Hatcher wrapped in a Superman cape was reportedly the most downloaded image on the Internet averaging 20,000 downloads each month for a six-month period.

Hatcher beat out four other actresses for one of the lead roles on ABC's Desperate Housewives, on which she stars as Susan Mayer, a role for which she won the Best Actress in a Musical or Comedy Golden Globe Award in January 2005. In 2005, Hatcher won the Screen Actors Guild (SAG) award in the same category. In July 2005, she was nominated for an Emmy award as Best Actress in a Comedy Series for the role, along with costars Marcia Cross and Felicity Huffman.

As of April 2006 Hatcher is one of the highest paid television actresses in the United States. She reportedly earns $285,000 per episode of Desperate Housewives.