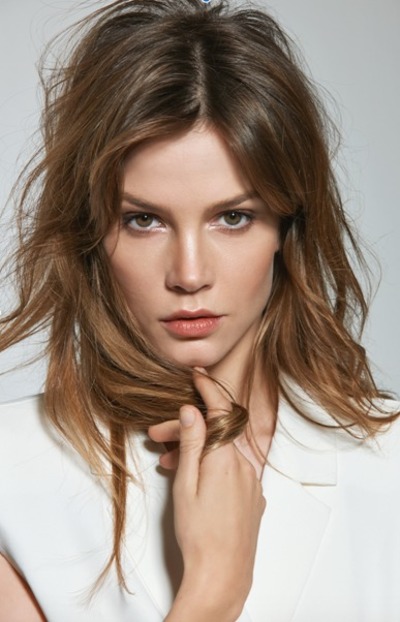 Sylvia Hoeks (born 1 June 1983) is a Dutch actress and former model best known for her role as Luv in Blade Runner 2049.

Hoeks grew up in Maarheeze, Noord-Brabant, Netherlands. She speaks Dutch, German, French, and English. After finishing high school, she attended the Maastricht Academy of Dramatic Arts.

Hoeks was scouted by Elite Model Management at age 14. Her first job was a cover for Elle Girl, and she traveled Europe as a model for several years while attending high school.

Hoeks' breakthrough was in the Jos Stelling film Duska (2007). She won a Golden Calf, the Dutch equivalent of an Academy Award, for Best Supporting Actress for the role. She next played Julia in The Storm (2009), and the title role in Tirza (2010). Hoeks starred as Johanna van Heesch in The Gang of Oss in 2011, and as Elise in The Girl and Death in 2012. In 2013, she played Claire Ibbetson in the film The Best Offer, her first international role.

Hoeks starred in the Dutch drama series Blood Relatives from 2010 to 2014 and the Dutch thriller series Adultery from 2011 to 2015.

Hoeks portrayed the replicant Luv in the 2017 science fiction film Blade Runner 2049. She trained with weights and in martial arts for six hours a day, six days a week before and during filming. Hoeks appeared as Lara in the Steven Quale action film Renegades. In February 2017, she was cast as Leigh in All the Devil's Men. In October 2017, Hoeks was cast in The Girl in the Spider's Web, the sequel to The Girl with the Dragon Tattoo.

Hoeks will return to television for the upcoming Apple drama series See as Queen Kane.