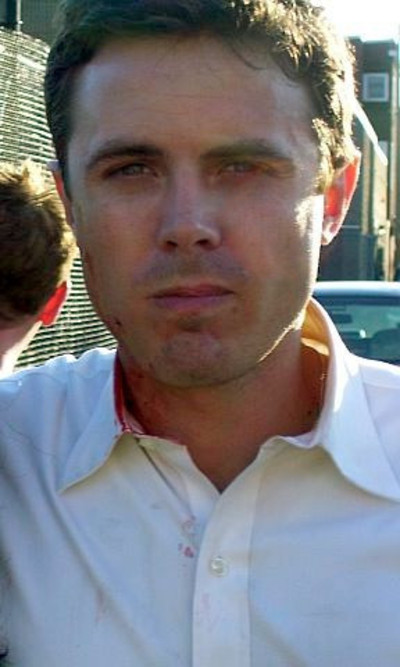 Affleck-Boldt (born August 12, 1975), is an American actor, film director, screenwriter and producer. He first came to attention for his performances in Gus Van Sant's films To Die For (1995), Good Will Hunting (1997) and Gerry (2002). He appeared in Ocean's Trilogy (2001-2007) a caper comedy series as Virgil Maloy. Affleck gained widespread recognition in 2007, starring in Gone Baby Gone, directed by his brother Ben Affleck, and The Assassination of Jesse James by the Coward Robert Ford, for which he received an Academy Award nomination for Best Supporting Actor. In 2010, he directed the mockumentary I'm Still Here, starring Joaquin Phoenix. He also received critical acclaim for his performance in Out of the Furnace and Ain't Them Bodies Saints (both 2013).

Affleck was born in Falmouth, Massachusetts. He has English, Irish, German, Scottish, French, and Swedish ancestry. His mother, Christine Anne "Chris" Affleck (née Boldt), was raised on New York's Upper East Side by her mother Elizabeth Shaw (née Roberts), director of public information at the Museum of Modern Art for over thirty years, and her mother's second husband, Samuel Shaw, an attorney who served in World War II. Her father, O'Brien "Obie" Boldt, was a Democratic activist and professor of political science at the City University of New York. Chris was educated at Radcliffe College and Harvard University, was a Mississippi freedom rider in the 1960s, and taught at The Brearley School before becoming a public elementary school teacher.

Affleck's father, Timothy Byers Affleck of Rhode Island, was a stage manager, director, writer and actor with the Theater Company of Boston in the mid-1960s and worked alongside Dustin Hoffman, Robert Duvall, Blythe Danner, Jon Voight and James Woods. During Affleck's childhood, he worked as an auto mechanic, a carpenter, a bookie, an electrician, a bartender and a janitor at Harvard University. His parents divorced when he was eight due to his father's chronic alcoholism. Affleck was raised by his mother. When Affleck was thirteen, his father moved to Indio, California, entered rehab, became an addiction counselor and later reconnected with his adult sons.

Affleck is three years younger than his brother Ben. They were childhood friends with actor Matt Damon, He was raised in a mostly Episcopalian family. Affleck graduated from Cambridge Rindge and Latin School in June 1993. He was inspired by his high school drama teacher Gerry Speca. As a child, he had numerous pets, including cats, snakes, guinea pigs and turtles. Affleck went to George Washington University to study politics and later transferred to Columbia University in New York City, where he majored in physics, astronomy, and Western philosophy, but never graduated. Affleck worked sporadically on television while finishing high school and attending college during the early 1990s.

Affleck's first movie role was as a sociopathic teenager in Gus Van Sant's 1995 dark comedy To Die For, alongside Joaquin Phoenix and Nicole Kidman. After co-starring with Halle Berry in the 1997 box office flop Race the Sun, later that year he appeared in two films featuring his brother Ben: Chasing Amy and Good Will Hunting.

In 2001, Affleck became part of an ensemble cast in the remake of the Rat Pack movie Ocean's Eleven, directed by Steven Soderbergh. Supporting the star leads, George Clooney and Brad Pitt, Affleck played Virgil Malloy, one of the pair of Mormon brothers hired to drive the getaway vehicle. Affleck reprised this character in two sequels, Ocean's Twelve (2004) and Ocean's Thirteen (2007). In the third installment of the trilogy, several scenes are set in Mexico and he has extended dialogue in Spanish. Affleck lived in Mexico as a child and speaks Spanish.

In 2007, Affleck starred in the Western The Assassination of Jesse James by the Coward Robert Ford, playing Robert Ford opposite Brad Pitt's Jesse James. For his performance, he received a Golden Globe nomination for Best Supporting Actor in a Motion Picture, a nomination for a Screen Actors Guild Award for Outstanding Performance by a Male Actor in a Supporting Role - Motion Picture, and an Oscar nomination for Best Performance by an Actor in a Supporting Role. Entertainment Weekly observed that "a revelatory Casey Affleck brings Ford to life with a mature sense of an underling's craven, fawning petulance." Other reviewers praised Affleck for being "terrific" and a "real revelation" while making "an indelible impression as the insecure, physically unprepossessing weakling."

Affleck also played his first leading man in a mainstream production in 2007. He starred in the Boston crime thriller Gone Baby Gone as the protagonist, Patrick Kenzie. Directed, produced, and co-written by Ben Affleck, the film was critically acclaimed and earned Casey further plaudits for his acting. The Boston Globe commented, "I'd never stopped to consider Casey Affleck as a movie star before, but under his big brother's tutelage, he blooms as a leading man of richly watchable savvy and intelligence." The New York magazine similarly praised Affleck's portrayal of the tough private detective and concluded, "Casey Affleck has never had a pedestal like the one his brother provides him, and he earns it. His Patrick is pale and raspy ... He’s not physically imposing, but he reels off four-letter words so fast that it leaves his bigger and more dangerous opponents staring in disbelief."

Affleck married actress Summer Phoenix, his girlfriend of six years, on June 3, 2006 in Savannah, Georgia. The couple were introduced by her brother, Joaquin. They have two sons, Indiana August, born on May 31, 2004 in Amsterdam, and Atticus, born in January 12, 2008. He resides in Los Feliz, Los Angeles with his family.