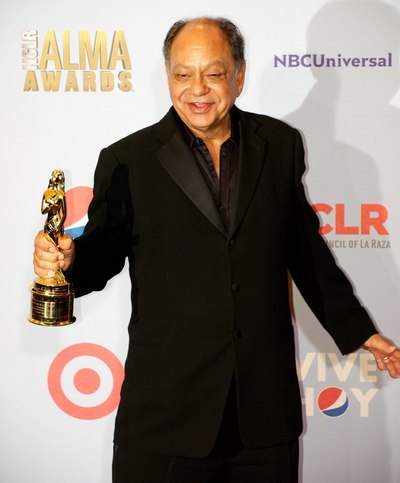 Richard Anthony "Cheech" Marin (born July 13, 1946) is a Mexican American comedian, actor and writer who gained recognition as part of the comedy act Cheech & Chong during the 1970s with Tommy Chong and early 1980s, and as Don Johnson's partner, Insp. Joe Dominguez on Nash Bridges. He has also voiced characters in several Disney productions, including Oliver and Company, The Lion King, It's Tough to be a Bug!, Cars, Cars 2 and Beverly Hills Chihuahua.

Marin's trademark is his characters' strong Mexican-accent; this is part of a comic persona, rather than a natural accent since Marin was born and raised in the United States.

Marin was born in Los Angeles, California, the son of Elsa (née Meza), a secretary, and Oscar Marin, a policeman in the LAPD. Marin was born with a cleft lip, which has long since been repaired. Although he speaks Spanish and uses it in some of his movies, he is not particularly fluent.

Marin's nickname "Cheech" is short for "chicharron", a fried pork skin that is a popular snack in Mexican cuisine and a favorite of marijuana smokers afflicted with "the munchies", and the nickname's alliteration with Chong's surname made "Cheech and Chong" an obvious choice for the name of the duo. The name of this character gave rise to the popular term "cheeched", meaning "under the influence of marijuana, usually at a relatively high dose".

Marin graduated from Bishop Alemany High School, located in California's San Fernando Valley, as well as from San Fernando Valley State College (now California State University, Northridge), where he was a member of Phi Sigma Kappa. Marin auditioned to sing for Frank Zappa in 1967, but moved to Vancouver, British Columbia in September of that year to avoid the U.S. draft during the height of the Vietnam War. In Vancouver, Marin met his future comedic partner Tommy Chong.