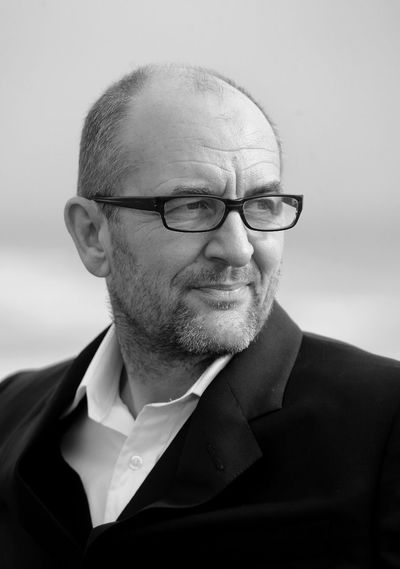 Ralph William John Brown (born 18 June 1957) is an English actor and writer, known for playing Danny the drug dealer in Withnail and I, the security guard Aaron (a.k.a. "85") in Alien 3, DJ Bob Silver in The Boat That Rocked aka Pirate Radio, super-roadie Del Preston in Wayne's World 2, the pilot Ric Olié in Star Wars: Episode I – The Phantom Menace and Henry Clinton in Turn: Washington's Spies. He won The Samuel Beckett Award for his first play Sanctuary written for Joint Stock Theatre Company in 1987, and the Raindance and Sapporo Film Festival awards for his first screenplay for the British film New Year's Day in 2001.

Brown was born in Cambridge, Cambridgeshire, England, the son of Heather R. and John F. W. Brown. He lived in Portsmouth until the age of seven, then moved to East Sussex where he attended Lewes Priory School. He acquired a Bachelor of Law (LL.B) in 1979 from the London School of Economics and Political Science.

His film roles include Dil's on-off boyfriend Dave in the Academy Award-winning film The Crying Game, Danny the drug dealer in Withnail & I, Great Train Robber Ronnie Biggs in Buster, roadie Del Preston in Wayne's World 2, teacher and rugby league player Phil in Up 'n' Under, prison guard captain Mr Burton in Mean Machine, Sgt Major Harris in the Paul Schrader film Dominion: Prequel to the Exorcist, and CIA renegade Mr Collins alongside Wesley Snipes in The Contractor. In 1995, Brown appeared in Steven Spielberg's slavery epic Amistad. In 2007, he filmed Caught in the Act, an independent British film. Brown starred as DJ Bob Silver in The Boat That Rocked aka Pirate Radio (2009), written and directed by Richard Curtis; Huge directed by Ben Miller (2009), The Kid (2010), directed by Nick Moran; Mission: London, a Bulgarian comedy directed by Dimitar Mitoviski which premiered in Sofia on 13 April 2010, and Sus (2010), written by Barrie Keeffe and directed by Robert Heath. He worked on the film Killing Bono (2010) and shot the feature film Dark Tide (2010) in Cape Town, opposite Halle Berry. He filmed I, Anna (2011) with Gabriel Byrne and Charlotte Rampling, then went on to work on Tower Block (2012) in London, Jack the Giant Slayer (2013) directed by Bryan Singer, and Stoker (2013) in Nashville, directed by Park Chan-wook. In 2016 he shot Final Score in West Ham United's recently abandoned Boleyn Ground with Dave Bautista, directed by Scott Mann. In 2017 he worked with Will Smith in Ang Lee's Gemini Man, due for release in the fall of 2019.

Among TV appearances, Brown appeared as PC Pete Muswell in The Bill from 1985 to 1986, appeared in Dennis Potter's Karaoke in 1995, portrayed Prince John in the BBC's adaptation of Sir Walter Scott's Ivanhoe in 1997, appeared as John Geddes in the ITV post-apocalyptic drama serial The Last Train, appeared as the moustachioed policeman Wintersgill in the Channel 4/Showtime series Cape Wrath, and did a memorable turn as shaven-headed gang-boss "Miami Vice" in the 2000 series Lock, Stock...The Series.

In 2005, he appeared in Coronation Street as Barney, roadie to Status Quo, and with Julia Davis in the cult TV sitcom Nighty Night as perverted new-age sex therapist Jacques. In 2007, he appeared in the final two episodes of Life on Mars as Frank Morgan, an interim DCI in 1973 sequences, and Sam's (John Simm's) surgeon in 2006 sequences.

Brown played Sarah Solemani's Dad in Him & Her, which began airing in 2010 and continued through 2014 for BBC Three comedy, winning a BAFTA for the final series The Wedding. In 2012, he worked on Inspector George Gently with Martin Shaw, The Poison Tree for ITV, and The Mimic for C4. In 2013, he worked on the aborted Marvin Gaye film Sexual Healing directed by Julian Temple, and the ABC series The Assets in Vilnius, Lithuania. In 2014, he shot Babylon for C4 and Elementary for CBS, followed by TURN: Washington's Spies for AMC, playing General Sir Henry Clinton leader of the redcoats. Brown returned for series 3 and 4 (2016-2017). He also played Johann Fennhoff a.k.a. Dr Faustus, in Agent Carter for Marvel, and guest lead on Blacklist.

In 2015 Brown was in all ten episodes of Legends with Sean Bean, with whom he had worked on Extremely Dangerous in the early 90s. In 2016-7 he returned to Prague with showrunner Ken Biller to shoot Genius: Einstein for Nat Geo which was premiered at the Tribeca Film Festival in April 2017. 2017 also saw the final five episodes of AMC's Turn in Richmond, Virginia.

In June 2016, Brown played the role of Bob Clay in the BBC film Reg.

In September 2017 Brown travelled to Guadeloupe for a guest lead in the BBCtv show Death In Paradise.

In 2018, Brown was interviewed at length about his career, with particular focus on his time on The Bill, for an edition of The Bill Podcast

Brown is currently starring as IRA Commander 'Muldoon' in the Tony Award winning Broadway play The Ferryman at the Bernard B. Jacobs Theatre until July 7th 2019.

Early years were in Moving Parts Theatre Company with Rachel Feldberg, Ruth Mackenzie, Anita Lewton, Saffron Myers. John Godber adapted A Clockwork Orange for Man In The Moon, King's Road, then Brown appeared in West written & directed by Steven Berkoff at the Donmar for five months (also shot for C4). Followed by Royal Court Theatre "Panic", Joint Stock "Deadlines", The RSC "Earwig" by Paula Milne, and The Everyman in Liverpool playing the title role in Macbeth. Retired from the stage shortly thereafter, and returned briefly 20 years later at The Bush Theatre to play guitar in punk play The Dysfunkshonalz by writer Mike Packer. After only one play in 30 years Brown joined The Ferryman company on Broadway in February 2019 which won four Tony Awards for Best Play, Best Director, Best Set Design and Best Costume.

Ralph Brown wrote the play Sanctuary for Joint Stock Theatre Company in 1987 which toured the UK and won the Samuel Beckett Award in 1987 for best first play.

The No-Neck Monsters Theatre Company brought the playwright and actor to Washington, D.C. from London to adapt his 1987 Samuel Beckett award-winning new play Sanctuary. Re-written as a rap musical for the "No Necks", the show became a successful and controversial production capturing homelessness, runaways and crack hitting the streets of D.C. Scott Davenport Richards wrote the music for the rap musical and it was directed by Gwendolyn Wynne. The first rap musical in the region The Washington Post, NPR, American Theatre Magazine and McNeil/Lehrer Newshour amongst others reported on the production. The production was nominated for three Helen Hayes Awards: Outstanding Resident Musical, Outstanding Lead Actress (Deidre L. Johnson) in a Resident Musical, and Outstanding Sound Design. Performers featured were Teagle F. Bougere, Erik Todd Dellums, Paul G. Griffin, Deidra L. Johnson, Helen Patton and Barbara Robinson

Brown has been married to actress Jenny Jules since 1992. He is a member of a Brighton-based Beach Boys tribute band, the Brighton Beach Boys.