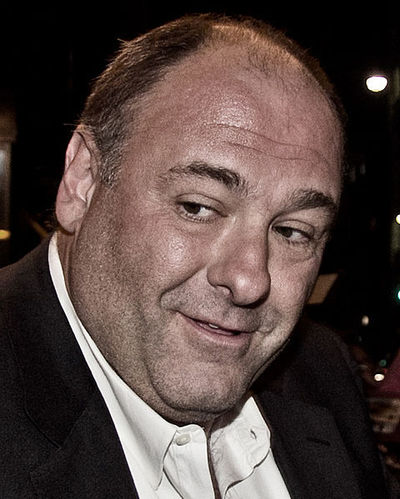 Gandolfini was best known for his role as Tony Soprano, an American Mafia boss in the HBO series The Sopranos. He garnered enormous praise for this performance, winning three Emmy Awards, three Screen Actors Guild Awards, and one Golden Globe Award for Best Actor in a Drama Series. His other notable roles included woman-beating mob henchman Virgil in True Romance (1993), enforcer and stuntman Bear in Get Shorty (1995), and impulsive "Wild Thing" Carol in Where the Wild Things Are (2009).

After finishing The Sopranos, Gandolfini produced the documentary Alive Day Memories: Home from Iraq (2007), in which he interviewed injured Iraq War veterans. His second documentary, Wartorn: 1861–2010 (2010), analyzed the impact of posttraumatic stress disorder on soldiers and families throughout several wars in American history from 1861 to 2010.

Gandolfini was born in Westwood, New Jersey. His mother, Santa, a high school lunch lady, was born in the USA, of Italian ancestry, and raised in Naples, Italy. His father, James Joseph Gandolfini, Sr., a native of Borgotaro, Italy, was a bricklayer, cement mason, and later the head custodian at Paramus Catholic High School, New Jersey. James, Sr., also earned a Purple Heart in World War II. His parents were devout Roman Catholics and spoke Italian at home. Due to the influence of his parents, he developed a strong sense of Italian American identity and visited Italy regularly.

Gandolfini grew up in Park Ridge, New Jersey and graduated from Park Ridge High School in 1979, where he played basketball, acted in school plays, and was awarded the title "Class Flirt" in his senior yearbook. He gained a Bachelor of Arts degree in communication studies from Rutgers University in 1982, where he worked as a bouncer at an on-campus pub. He also worked as a bartender and club manager in Manhattan prior to his acting career. He was introduced to acting as a young man living in New York City, when he accompanied his friend Roger Bart to a Meisner technique acting class, where he studied for two years under Kathryn Gately at The Gately Poole Conservatory.

Gandolfini performed in a 1992 Broadway production of On the Waterfront for six weeks. One of his earlier film roles was that of Virgil, a brutal woman-beating mob enforcer, in the romantic thriller True Romance (1993), for which he said one of his major inspirations was an old friend of his, who was a hitman. In the film Terminal Velocity (1994), Gandolfini played Ben Pinkwater, a seemingly mild-mannered insurance man who turns out to be a violent Russian mobster. In Get Shorty (1995), he appeared as a bearded ex-stuntman with a Southern accent, and in The Juror (1996), he played a mob enforcer with a conscience.

Gandolfini's most acclaimed role was Tony Soprano, the lead character in the HBO drama The Sopranos, a New Jersey mob boss and family man whose constant existential questioning includes regular psychiatric appointments. The show debuted in 1999 and was broadcast until 2007. For his depiction of Soprano, Gandolfini won three Emmys for "Best Actor in a Drama" and Entertainment Weekly listed him as the 42nd Greatest TV Icon of All Time. In addition to the awards that he won, Gandolfini received numerous nominations and two SAG Awards for being a member of the series' ensemble.

Gandolfini maintained ties with his Park Ridge, New Jersey hometown by supporting its Octoberwoman Foundation for Breast Cancer Research. He appeared at its annual October banquet and often brought other cast members of The Sopranos to help draw larger crowds. He lived in New York City and owned a lot on the Lake Manitoba Narrows. In 2009, he purchased a home in the hills of Tewksbury Township, New Jersey. GQ '​s Brett Martin said about Gandolfini: "In interviews, which the actor did his very best to avoid, the actor would often fall back on some version of 'I'm just a dumb, fat guy from Jersey.'"

Gandolfini and his first wife, Marcy Wudarski, divorced in December 2002. They have a son named Michael (born 2000). On August 30, 2008, after two years of dating, Gandolfini married former model Deborah Lin in her hometown of Honolulu, Hawaii. Their daughter, Liliana Ruth Gandolfini, was born in Los Angeles, California on October 10, 2012.

Gandolfini died on June 19, 2013, aged 51, during a vacation in Rome, Italy. He was expected to travel to Sicily a few days later to receive an award at the Taormina Film Fest. After a day of sightseeing in sweltering heat, Gandolfini's 13-year-old son Michael discovered him unconscious at around 10 pm local time on the bathroom floor at the Boscolo Exedra Hotel in the Piazza della Repubblica. Michael called hotel reception, who called emergency paramedics. Gandolfini reportedly arrived at the hospital at 10:40 pm and was pronounced dead at 11 pm. An autopsy confirmed that he had died of a heart attack.