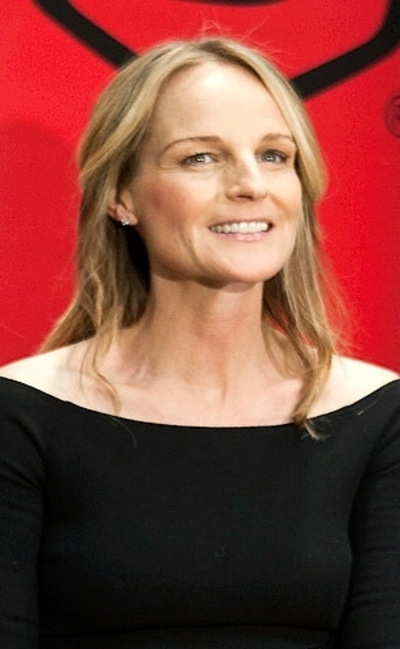 Helen Elizabeth Hunt (born June 15, 1963) is an American actress, film director, and screenwriter. She starred in the sitcom, Mad About You, for seven years before being cast in the 1997 romantic comedy film, As Good as It Gets for which she won the Academy Award for Best Actress. Some of her other notable films include Twister, Cast Away, What Women Want, Pay It Forward, Soul Surfer and The Sessions. She made her directorial debut in 2007 with Then She Found Me. She has won four Emmy awards, four Golden Globe awards, two Screen Actors Guild awards, and an Oscar.

Hunt was born in Culver City, California. Her mother, Jane Elizabeth (née Novis), worked as a photographer, and her father, Gordon E. Hunt, is a film director and acting coach. Her uncle, Peter H. Hunt, is also a director. Her Iowa-born maternal grandmother, Dorothy (Anderson) Fries, was a voice coach. Hunt's paternal grandmother was from a German Jewish family, while Hunt's other grandparents were of English descent (her maternal grandfather was born in England). When she was three, Hunt's family moved to New York City, where her father directed theatre (Hunt attended plays as a child several times a week). Hunt studied ballet, and briefly attended UCLA.

Hunt began working as a child actress in the 1970s. Her early roles included an appearance as Murray Slaughter's daughter on The Mary Tyler Moore Show, alongside Lindsay Wagner in an episode of The Bionic Woman, an appearance in an episode of Ark II called Omega, and a regular role in the television series The Swiss Family Robinson. She appeared as a marijuana-smoking classmate on an episode of The Facts of Life. Hunt also played a young woman who, while on PCP, jumps out of a second-story window, in a 1982 TV movie called Desperate Lives (a scene which she mocked during a Saturday Night Live monologue in 1994). That same year, Hunt was cast on the ABC sitcom It Takes Two, which lasted a single season. In the mid-1980s, she had a recurring role on St. Elsewhere as Clancy Williams, the girlfriend of Dr. Jack "Boomer" Morrison. She played Jennie in the television movie Bill: On His Own, co-starring Mickey Rooney. She also starred in the 1985 film Girls Just Wanna Have Fun, with Sarah Jessica Parker and Shannen Doherty.