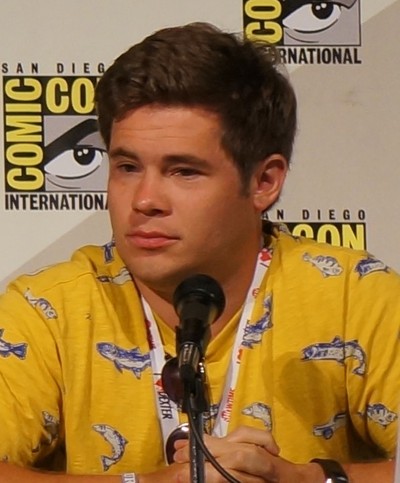 Adam Patrick DeVine (born November 7, 1983) is an American actor, comedian, singer, writer, producer, and voice actor. He is a star and co-creator of the Comedy Central series Workaholics, as well as Adam DeVine's House Party. He played the role of Bumper Allen in the musical films Pitch Perfect and Pitch Perfect 2.

DeVine was born in Waterloo, Iowa, to Dennis and Penny DeVine. He graduated from Millard South High School in Omaha, Nebraska, in 2002. In June 1995, when he was 11 years old, he was hit by a 42-ton concrete truck while walking his bike across the street, resulting in multiple fractures to both his legs that required multiple surgeries over three years; it took two years for him to learn to walk again.

He attended Orange Coast College along with friend and fellow cast member Blake Anderson. He later moved to Los Angeles where he began working as a stand up comedian and actor.

In 2006, DeVine and friends Blake Anderson, Anders Holm, and Kyle Newacheck formed the sketch-comedy group Mail Order Comedy. Although they toured together live, the group found greater success on websites such as Myspace and YouTube. The G4 series Attack of the Show! featured "Wizards Never Die", a music video by Mail Order Comedy (as The Wizards), in April 2008. Purple Magic, a music album by The Wizards containing 14 tracks, was released on April 1, 2009. Comedy Central's original series Workaholics premiered on April 6, 2011, and stars DeVine, Anderson, and Holm and co-stars Newacheck, all of whom also serve as series creators and executive producers.

DeVine had small roles in Mama's Boy (2007) and National Lampoon's 301: The Legend of Awesomest Maximus (2009). He had a recurring role on the television series Samantha Who?. He also appeared on an episode of the Fox show Traffic Light (2011). In season 4 of Community (2013), he played a small role as William Winger, Jr., Jeff's half-brother. In the first episode of Arrested Development's fourth season, he played an airport ticket attendant alongside his Workaholics co-stars. He co-starred as Bumper Allen in the 2012 musical comedy film Pitch Perfect. For this performance, he won a Teen Choice Award for Choice Movie Villain and earned one nomination for Choice Movie Breakout. He reprised the role of Bumper in the film's sequel Pitch Perfect 2 (2015).

DeVine has appeared in the SimCity video game trailers as The Mayor. DeVine is the voice artist for the character Pizza Steve in the Cartoon Network animated series Uncle Grandpa, which premiered on September 2, 2013. He stars in his own Comedy Central series, Adam DeVine's House Party, which debuted in October 2013. He also appears in a recurring role in seasons 5, 6 and 7 of the ABC network sitcom Modern Family as Andy, the Pritchett family's nanny. In 2016, he will star alongside Zac Efron in the comedy film Mike and Dave Need Wedding Dates. In June 2016 it was announced that Devine, Anderson, Holm and Newacheck are working on a film with Seth Rogen as producer.