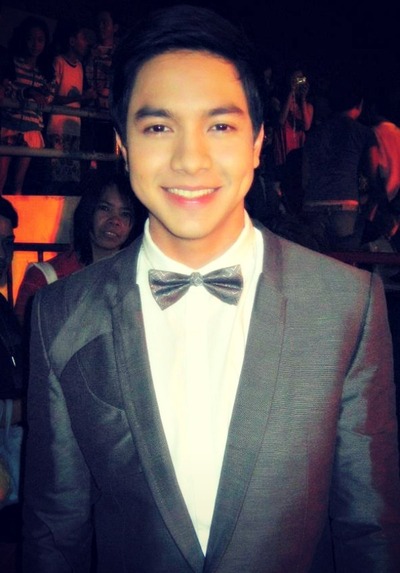 Richard Reyes Faulkerson, Jr. (born January 3, 1993 in Sta. Rosa, Laguna) also known by his stage name Alden Richards, is a Filipino television actor and model who is currently signed to GMA Network. He is best known for his TV roles in Alakdana, Tween Hearts, and One True Love and his breakthrough movie, The Road. In May 2013, he released his debut album under Universal Records.

Alden was born on January 3, 1993 in Santa Rosa, Laguna, Philippines as the second child of Richard Sr., a native of Laguna, and Rosario Faulkerson, a native of Pampanga. Alden is a Business Administration student of De La Salle Canlubang in Canlubang, Calamba Laguna. Before he became an actor, he joined various Male Pageants in Laguna and act as a part-time commercial model. He holds the titles, Ginoong Sta Rosa 2009 and Ginoong Laguna 2010. He also tried his luck in show business by auditioning in Pinoy Big Brother: Teen Clash 2010 but failed to make it on the official list of housemates. On 2009, he joined StarStruck but failed also to be part of the reality show. He also appeared on a television commercial for a multivitamins product.

Richards was launched as an actor in GMA Network for the afternoon soap, Alakdana with leading lady Louise delos Reyes after signing up a 5-year contract with the network. He played a disabled man, Joma in his first ever TV show. In an interview, he admits that acting became more of a prioty for him rather than schooling even though he has an intention of getting a degree. He also said that when he becomes successful in show business, he plans to use his earnings to finance the studies of his younger siblings. On 2011, he became part of the successful teenage series, Tween Hearts and acted also for the film, Tween Hearts: Class of 2012. He is currently active as a weekly performer of Party Pilipinas. He also graced two episodes of Spooky Nights in Singil and in the Christmas episode of Spooky Nights as Elmer. Alden was praised by critics as a new breed of actor in the movie The Road where he played as a young man that was traumatized in his young age; with the killing of his mother by his father then the father takes suicide after thus leads him to become violent himself as he grows up, killing two young females stranded on the road. He also starred on a highly anticipated movie entry for 2011 Metro Manila Film Festival for Ang Panday 2, where he played as Gobi. Richards was also praised by some writers that he will be the next big star of GMA Network because of his reported friendliness with the press, referring to him as the John Lloyd Cruz of GMA Network.

Richards was awarded as the 1st Filipino Amazing Male Newcomer in the first Yahoo! OMG! Philippines Awards (2011). He also won as Best New Actor in the Golden Screen Awards. The newcomer actor garnered two awards in one year which signifies a smooth soar for his career. Alden is never hesitant to share his love life with the media, the fact that he invited the FHM Sexiest of 2011, Sam Pinto for a date on national TV. The latter did accept the invite and later on held a cruise date in the Manila Bay, but the sexy actress revealed that it was just a friendly date. On Valentines Day of 2012, a GMA Network promo A Date with Alden Richards surfaces in television and the micro-blogging site Twitter where it trended.