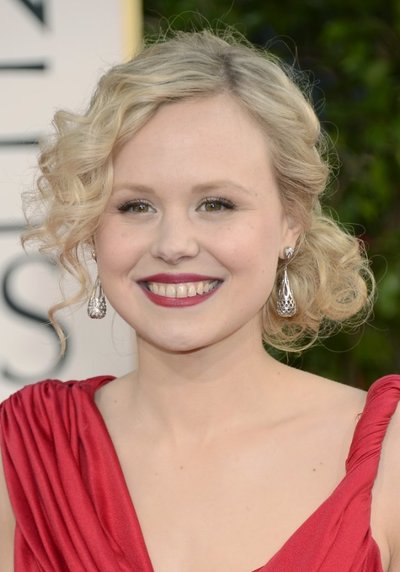 Alison Pill (born November 27, 1985) is a Canadian actress. A former child actress, Pill began her career at age twelve, appearing in numerous films and television series. She transitioned to adult roles and her breakthrough came with the television series The Book of Daniel (2006). That same year, she was nominated for a Tony Award for Best Featured Actress in a Play for her performance in The Lieutenant of Inishmore (2006).

Pill was born in Toronto, Ontario, Canada. Her father, a financier, is Estonian. Pill attended Vaughan Road Academy, where she enrolled in the "Interact" program, designed for students interested in dance, music, athletics, and theatre.

She decided to involve in acting career when she was 10 years old. As a member of the Toronto Children's Chorus, she was chosen to narrate one of their performances. Her mother tried to discourage Alison by getting her a job as a background performer on the series Kung Fu: The Legend Continues. By the time she was 11, she'd played a guest role on an episode of the kids' series The New Ghostwriter Mysteries. At 12, she landed roles in two TV movies and a mini-series, a guest appearance on the TV series PSI Factor and voiced a character on an animated series. After roles in two more television movies, she landed her first feature film role, a small budget Canadian movie called The Life Before This in 1999, followed by the role of Jacobs older sister Marfa in Jacob Two Two Meets the Hooded Fang. Pill played roles in four more TV movies before the age of fourteen.

The next year, she landed a small role in Skipped Parts in 2000 starring Drew Barrymore and Mischa Barton, then appeared in four more TV movies and features that year, including playing Farrah Fawcett's daughter in the TNT network movie Baby and a lead role in the Canadian film The Dinosaur Hunter, which was originally intended to be shown at a dinosaur museum and on a provincial education channel, but which made its way to the Burbank International Film Festival, winning Pill an award for Best Child Actress. She landed the role of young Lorna in the ABC-TV biopic Life with Judy Garland: Me and My Shadows in 2001, based on the memoir by Garland's daughter, Lorna Luft. That year, Pill also played Sissy Spacek's daughter in the TV flick Midwives.

In 2003, she played Katie Holmes' sister in the indie feature Pieces of April. Pill won the lead in the CTV-TV movie Fast Food High, about a teenager who gets a job at a fast food restaurant and tries to set up a union. She also landed a supporting role in Confessions of a Teenage Drama Queen in 2003, starring Lindsay Lohan. Pill ventured off into stage acting, with the New York City staging of None of the Above as the first item in her theater credential. This was followed by The Distance From Here, On the Mountain, Blackbird, Mauritius. In 2006, she starred as Grace Webster in the short-lived NBC drama The Book of Daniel. That same year, she was nominated for the Tony Award for Best Featured Actress in a Play for her performance as Mairead in Martin McDonagh's The Lieutenant of Inishmore. Because of her busy work schedule, Pill's schooling was done through a program for youngsters in the business. Since graduating from high school, Pill moved to New York to pursue a career in theatre, but continues to work in movies such as Dan in Real Life in 2007.

Pill had a major supporting role as campaign manager Anne Kronenberg in the Oscar-winning 2008 film Milk.

In 2009, she performing with Erin Hill & her Psychedelic Harp playing the Twilight Zone-inspired "Meredith Moon" and "The Real North Pole" sci-fi Christmas Harp; she was cast as April on In In Treatment. She later played Kim Pine in the movie Scott Pilgrim vs. the World, as well as on Scott Pilgrim vs. the Animation. She portrayed Empress Maud in the miniseries The Pillars of the Earth. In Theatre, Actresses Abigail Breslin and Pill starring in Broadway's "The Miracle Worker"; She has worked with Woody Allen twice, first as Zelda Fitzgerald in Midnight in Paris and Hayley in To Rome with Love.

She starred in short films including Denise in 2012 with Chris Messina, Santa Baby in which she sang and danced, Cover Up with Jason Ritter and Woman in Deep, where she played a woman who calls a suicide prevention hot line and is put on hold with her husband Joshua.

In a new adaptation of "Wait Until Dark," Pill starred as a blind woman who must fend for her life; She also starred in the film Snowpiercer, alongside Chris Evans and Tilda Swinton, which was released in 2013. From 2012 until its ending in 2014, she appeared in Aaron Sorkin's HBO series The Newsroom as Maggie Jordan. Cooties starring Elijah Wood and Pill discuss the film's blend of horror and comedy, In Zoom, Pill is Emma, an aspiring comic book artist; She has a part in Hail, Caesar! as Eddie Mannix's wife,; Pill is attached to star in Sook Yin-Lee's Canadian indie Octavio is Dead, a role that will chase her late father's ghost in Mexico City; In Goon: Last of the Enforcers as Eva Glatt, Glatt's love interest in first movie Goon, now married to Glatt. Um role in pilot My Time/Your Time, It is an adaptation of webserie 7P/10E; At present, she is part of the cast of The Family as Willa Warren. In 2016, Pill is set to co-star with Jessica Chastain in the EuropaCorp thriller Miss Sloane.

Pill was engaged to actor Jay Baruchel from 2011 to 2013. Baruchel made their engagement public when he thanked his fiancée (Pill) during an acceptance speech at the Genie Awards in Ottawa, Canada. Baruchel alluded to their break-up in a Twitter posting on February 16, 2013. Pill became engaged to actor Joshua Leonard in January 2015. They were married on May 24, 2015 after a four month long engagement. In July 2016, it was announced Pill and Leonard were expecting their first child, a girl.