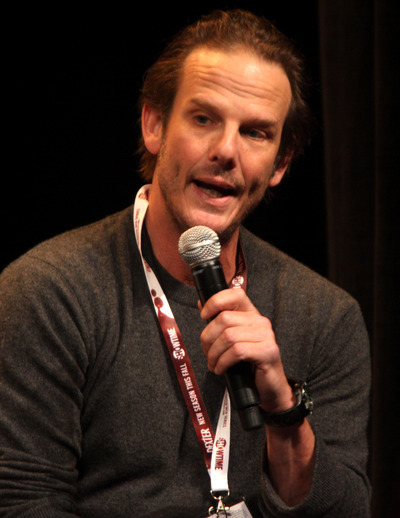 Peter Berg (born March 11, 1962) is an American actor, film director, producer and writer. He is known for directing films such as The Rundown (2003), Friday Night Lights (2004),The Kingdom (2007), Hancock (2008) and Battleship (2012). He also developed the television series Friday Night Lights, which was adapted from the film he directed. As an actor he is best known for his role as Dr. Billy Kronk on the CBS medical drama Chicago Hope.

Berg was born in New York City, New York. He is the son of Sally and Laurence "Larry" Berg. Berg's father was Jewish and his mother Christian. He is the cousin of writer H. G. Bissinger, whose book Friday Night Lights provides the basis for the film and TV series of the same name. His mother co-founded a youth group named Catalog for Giving and worked at a psychiatric hospital when Berg was growing up. He has a younger sister, Mary. After graduating from The Taft School in 1980, Berg attended Macalester College in Saint Paul, Minnesota, where he majored in theater arts and theater history. He graduated in 1984, and in 1985 moved to Los Angeles to pursue his film career.

Berg put his acting aspirations on hold when he first arrived in Los Angeles, choosing instead to learn about the film business as a production assistant. In 1992, Berg gained recognition for playing a World War II soldier in the film A Midnight Clear. In 1998, Berg made his feature directorial debut with Very Bad Things, a black comedy starring Jon Favreau, Christian Slater, Jeremy Piven, Daniel Stern, and Leland Orser. The film, which was shown at the Toronto and San Sebastian Film Festivals, received mixed critical reception. In 2000, he created Wonderland, an edgy dramatic television series set in an asylum. While the ABC show received rave reviews and garnered a cult following, it failed to deliver ratings and was quickly canceled.

Berg in 2003 directed The Rundown. Starring Dwayne "The Rock" Johnson and Seann William Scott, the Berg-helmed action comedy received mixed reviews from critics and disappointed at the box office, only grossing 80 million of its reported 85 million budget. In 2004, Berg began work on his third directorial effort, Friday Night Lights, a football film based on the New York Times bestseller written by Buzz Bissinger.

In 2006, Berg developed and became executive producer of NBC’s Peabody and Emmy Award-winning drama Friday Night Lights, based on the novel and film of the same name.

On August 28, 1993, Berg married long-time girlfriend Elizabeth Rogers; they divorced in 1998. Berg has a son, Emmett, who was born December 1999. He began dating comedienne Whitney Cummings in early 2013.