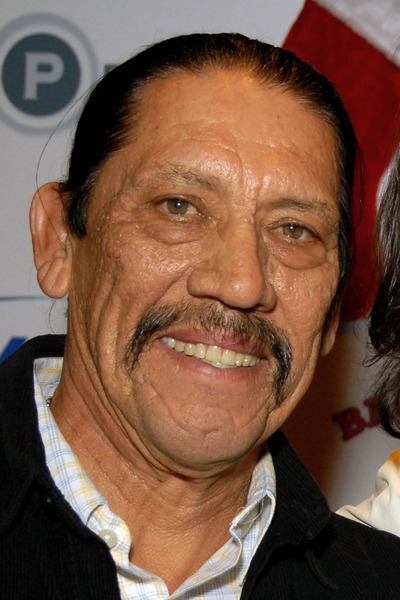 Dan "Danny" Trejo (Spanish pronunciation: [ˈtɾexo]; born May 16, 1944) is an American actor who has appeared in numerous Hollywood films, often as hypermasculine characters, villains and anti-heroes. Some of his notable films include Heat, Con Air, and Desperado, the latter with frequent collaborator Robert Rodriguez. He is perhaps most recognizable as the character Machete, originally developed by Rodriguez for the Spy Kids series of movies, and later expanded into his own series of films aimed at a more adult audience.

Dan Trejo was born in the Echo Park neighborhood of Los Angeles, California. He is the son of Alice Rivera and Dan Trejo, a construction worker. He is of Mexican descent. He is a second cousin of filmmaker Robert Rodriguez, though the two were unaware that they were related until the filming of Desperado.

Throughout the 1960s, Trejo was in and out of jail and prison in California, with Trejo crediting his appearance as contributory to his constantly getting into trouble. There are conflicting accounts of his prison chronology. By one account, his final stint in custody ended in 1972; by another account, he did time in a juvenile offenders' camp and six California prisons between 1959 and 1969. He recalled that his last prison term was five years. While serving in San Quentin Prison, he became a champion boxer in lightweight and welterweight divisions within that prison. During this time, Trejo became a member of a twelve-step program, which he credits with his success in overcoming drug addiction. In 2011, he recalled that he had been sober for 42 years.

Upon his final release, Trejo enrolled in Pitzer College located in Claremont, California but subsequently left after one semester of attendance.

While working as a youth drug counselor, a teenage patient asked for his assistance dealing with cocaine problems on the set of Runaway Train. While there, Trejo was offered a job as an extra in the film's prison scenes. Edward Bunker, himself a former convict and well-respected crime author who was writing the screenplay for the film, recognized Trejo, with whom he had done time at San Quentin. Bunker, remembering Trejo's boxing skills, offered him $320 per day to train Eric Roberts, one of the movie's stars, for a boxing scene. Director Andrei Konchalovsky liked Trejo's work and decided to offer him a small role in the film as a boxer. It has been widely misreported that Trejo was actually serving time in the prison during filming, when in fact he had been released over a decade earlier.

Trejo is known for his distinctive appearance. In addition to his heavily lined face, scarred from cystic acne and a brawl (usually sporting a long mustache), he has displayed the large tattoo on his chest for many roles (the tattoo depicts a woman wearing a sombrero). He often plays thugs or lowlife characters, although he has also played sympathetic characters in films such as Robert Rodriguez's Spy Kids trilogy, Bubble Boy and a guest appearance on the USA Network series Monk where art imitated life in his portrayal of a convict roommate to Tony Shalhoub's undercover detective.

Trejo lives nearby his mother, in Fresno, California.