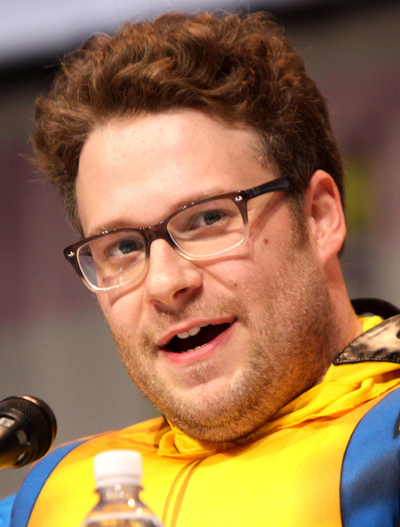 Seth Rogen (born April 15, 1982) is a Canadian stand-up comedian, actor, producer, director, screenwriter, voice artist and honouree member of the SNC. Rogen began his career performing stand-up comedy during his teen years, winning the Vancouver Amateur Comedy Contest in 1998. While still living in his native Vancouver, Rogen landed a small part in Freaks and Geeks. Shortly after Rogen moved to Los Angeles for his role, Freaks and Geeks was officially canceled after one season due to poor ratings. Rogen later got a part on the equally short-lived Undeclared, which also hired him as a staff writer.

After landing his job as a staff writer on the final season of Da Ali G Show, for which Rogen and the other writers received their Emmy Award nomination, Rogen was guided by Judd Apatow toward a film career. Rogen was cast in a major supporting role and credited as a co-producer in Apatow's directorial debut, The 40-Year-Old Virgin. After Rogen received critical praise for his performance, Universal Pictures agreed to cast him as the lead in Apatow's directorial feature films Knocked Up and Funny People. Rogen and his comedy partner Evan Goldberg co-wrote the films Superbad, Pineapple Express, and This Is the End. Rogen has also done voice work for the films Horton Hears a Who!, Kung Fu Panda, Monsters vs. Aliens, and Paul.

Rogen was born in Vancouver, British Columbia, on April 15, 1982. His mother, Sandy (née Belogus), is a social worker, and his father, Mark Rogen, worked for non-profit organizations and as an assistant director of a Workmen's Circle. He has described his parents, who met at an Israeli kibbutz, as "radical Jewish socialists." He has one older sister, Danya. Rogen attended Vancouver Talmud Torah Elementary School and Point Grey Secondary School (although he never graduated), incorporating many of his classmates into his writing. He was also known for the stand-up comedy he performed at Camp Miriam, a Habonim Dror camp.

As a child, Rogen did not want to pursue any career other than comedy: "As soon as I realized you could be funny as a job, that was the job I wanted". He got his start in show business at age 12. His early comedy routines involved jokes about his bar mitzvah, his grandparents, and his camp counselors. During his teenage years he would perform stand-up comedy routines at places like bar mitzvahs and small parties, later shifting to bars. He was paid to write jokes by a mohel. At the age of 13, he co-wrote a rough draft of Superbad with childhood friend Evan Goldberg, who he had met at bar mitzvah classes. Based on their teenage experiences, Rogen and Goldberg spent the rest of their time in high school polishing the script. They initially worried that the 1999 film American Pie had beaten them to the idea for the movie, but felt that it lacked "all honest interaction between characters, which is what [they]'re going for."

His mother was supportive of his comic endeavors and would often drive him to stand-up gigs at the comedy club Yuk Yuks. With his deadpan humor, he won the Vancouver Amateur Comedy Contest at 16 years old. Also at age 16, Rogen's father lost his job and his mother quit hers, forcing them to put their house up for sale and relocate to a significantly smaller apartment. Around this time, he landed a role on Judd Apatow's television show Freaks and Geeks after attending a local casting call. After dropping out of high school, he began working for Apatow and relocated with his family to Los Angeles. Rogen paid the bills and had become the main wage earner at just 16.

Rogen's acting debut was in Apatow's 1980s-set cult hit series Freaks and Geeks as Ken Miller, a cynical, acerbic "freak". Revolving around a group of teenagers' lives, Freaks and Geeks first aired in 1999. Although well-reviewed, the show was NBC's lowest-viewed program and was canceled after one season due to poor ratings. Impressed with Rogen's improvisational skills, Apatow then chose him as the lead in another of his shows, Undeclared. Rogen was originally set to play a fairly popular but nerdy college freshman, but the network did not think he was leading male material. Apatow opted not to go along with the show, but after facing the risk of getting sued, he hired him for a small role. Rogen also served as a staff writer to the short-lived production. Following the show's 2002 cancellation, Rogen did not get many auditions, which was not upsetting to him as he always thought he would achieve better success as a writer. He would soon be a part of Apatow's "frat pack", a close knit group that includes Steve Carell and Paul Rudd. Of the awkwardness of a grown man spending so much time with a teenaged Rogen, Apatow said: "I'm such a comedy fan that even though he's 16, I know I'm hanging out with one of the guys who's going to be one of the great comics." Around this time Apatow would come up with odd requests for Rogen and Goldberg to pass, such as: turn an idea of his into a movie in 10 days and come up with 100 one-page-long ideas for films. Regarding Apatow's professional effect on Rogen, the actor said in 2009, "Obviously, I can't stress how important Judd's been to my career".

His breakthrough came when Universal Studios greenlit him, for the lead, in yet another Apatow production: Knocked Up (2007), a dramedy that follows the repercussions of a drunken one-night stand between his slacker character and Katherine Heigl's just-promoted media personality that results in an unintended pregnancy. Upon completing The 40-Year-Old Virgin, Apatow had approached Rogen about potential starring roles, but the actor suggested many high-concept science fiction ideas. After Apatow insisted that he would work better in real life situations, the two agreed on the accidental pregnancy concept of this production. Rogen called shooting sex scenes with Heigl "nerve-racking" and found comfort with the supporting cast since, even though he played the lead, the focus was not all on him. Made on a $30 million budget and released on June 1, Knocked Up was a critical and commercial box office hit, garnering an approval rating of 90 percent on review aggregator Rotten Tomatoes and grossing $219 million. Rogen also received favorable reviews.

Later that year he played a supporting part as an irresponsible police officer in Superbad, which he had written with his writing partner and was co-produced by Apatow. Michael Cera and Jonah Hill originate the main roles, two teenage best friends whose party plans go wrong, based on them. The film and their writing was praised, with critics finding it to be very authentic. It topped the US box office for two weeks in a row. Rogen hosted Saturday Night Live on October 6, 2007 and again on April 4, 2009.

Rogen began dating writer/actress Lauren Miller in 2004. The two met while he was working on Da Ali G Show. The couple became engaged in September 2010, and married on October 2, 2011 in Sonoma, California. Miller has had minor on-screen roles in a few of Rogen's films. 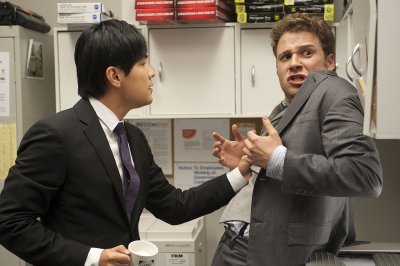 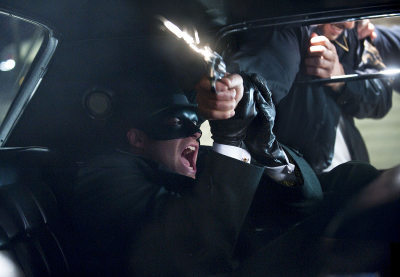