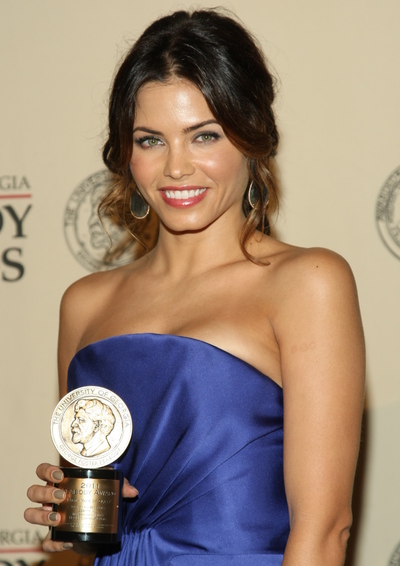 Jenna Lee Dewan-Tatum (née Dewan; born December 3, 1980) is an American actress and dancer. She appeared in the movies Step Up and The Playboy Club and has been a background dancer for artists including Missy Elliott, Janet Jackson, and Christina Aguilera. Dewan-Tatum is the co-founder of 33andOut Productions and Iron Horse Entertainment.

Dewan-Tatum was born in Hartford, Connecticut, the daughter of Nancy Bursch Smith (née Bursch) and Darryll Dewan, who was a running back on the 1972 Notre Dame football team. Her father is of Lebanese and Polish descent and her mother is of German and English ancestry. Her parents divorced when Jenna was young and her mother remarried Claude Brooks Smith. During high school at Grapevine High School in Grapevine, Texas, Dewan-Tatum was a varsity cheerleader. She graduated in 1999 and was voted prom queen her senior year. She went to University of Southern California and was a member of the California Gamma Chapter of Pi Beta Phi.

Prior to her acting career, Dewan-Tatum was a background dancer, working with singers such as Janet Jackson, 'N Sync, Sean Combs, Toni Braxton, Celine Dion, Pink, Missy Elliott, Ricky Martin and Billy Crawford. In 2001 she appeared in Janet Jackson's music video All for You and toured with Jackson on her All for You Tour. Dewan-Tatum appeared in a bit role as a backup dancer in the film The Hot Chick. Dewan-Tatum was also featured in Christina Aguilera's music video for the single Not Myself Tonight in 2010.

In 2004, Dewan-Tatum made her acting debut on the Fox sitcom television series Quintuplets. Dewan-Tatum has guest-appeared on The Young and the Restless, Joey and Melrose Place. In 2005, Dewan-Tatum portrayed the protagonist in the independent medium-budget supernatural horror film Tamara. In 2006, Dewan made appearances in The Grudge 2 and Take the Lead. That same year Dewan-Tatum starred as the female lead in the dance drama Step Up as Nora Clark, a dance student partnered with a troubled student who is sent to spend his community service as a janitor. The film made $119 million worldwide.

In 2006, Dewan-Tatum met actor Channing Tatum on the set of their movie Step Up. They began dating shortly after filming had finished. The couple became engaged in early September 2008 in Maui, and married on July 11, 2009, at Church Estates Vineyards in Malibu, California. Their daughter, Everly Elizabeth Maiselle was born on May 31, 2013 in London, England.

Dewan-Tatum is an animal rights activist and a vegan.