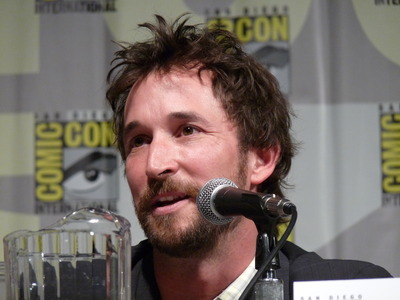 Noah Strausser Speer Wyle (born June 4, 1971) is an American film, television and theatre actor. He is best known for his roles as Dr. John Carter in ER and as Tom Mason in Falling Skies. He has also played Steve Jobs in the 1999 docudrama Pirates of Silicon Valley, Dr. Kenneth Monnitoff in the cult hit Donnie Darko, and Flynn Carsen in The Librarian franchise. Wyle was named one of the 50 Most Beautiful People by People magazine in 2001.

Wyle, the middle of three children, was born in Hollywood, California, the son of Marjorie (néeSpeer), a registered orthopedic head nurse, and Stephen Wyle, an electrical engineer and entrepreneur. His father was Jewish and his mother Episcopalian, and he was raised "fairly nondenominationally". Wyle's parents divorced in the late 1970s and his mother later married James C. Katz, a film restorationist with three children of his own from a previous marriage. Wyle's paternal grandparents, Edith and Frank Wyle, founded the Los Angeles Craft and Folk Art Museum. Edith Wyle was an expressionist painter who also created The Egg and The Eye, an innovative café and shop on Wilshire Boulevard in the Miracle Mile district of Los Angeles, which soon became the preferred hangout for artists, travelers and dreamers. Through Edith Wyle, his great-grandfather is Louis Persinger.

Wyle was educated at The Thacher School in Ojai, California, and graduated with the class of 1989. Wyle participated in a theater arts program at Northwestern University after his junior year of high school and appeared in high school plays, even winning an award for a play he wrote. After graduation, he studied with acting teacher Larry Moss while living in a small apartment on Hollywood Boulevard.

Wyle was first seen in the Paul Bartel film Lust in the Dust (a western exploitation/parody which starred Tab Hunter, Lainie Kazan and Divine) as an extra in the local gang running the small town of Chile' Verde.

Wyle’s big break came when he was given the pilot script for ER and was cast as medical student John Carter. Wyle was the only major cast member of ER to have been with the show since its inception (1994) when he left after its eleventh season (2005). His performances on the show earned him Emmy Award nominations in each of its first five seasons.

Wyle dated several women, including actress Samantha Mathis. While filming The Myth of Fingerprints in 1996, he met make-up artist Tracy Warbin. After proposing to her on Valentine's Dayin 1999, they married on May 6, 2000. Together, they have a son, Owen Strausser Speer Wyle (born November 9, 2002), and a daughter, Auden Wyle (born October 15, 2005). Warbin's pregnancy with Auden was announced on The Tonight Show with Jay Leno.

Wyle bought Bo Derek's ranch in Santa Ynez Valley, California, in June 1999, for approximately $2.5 million. They listed their Los Feliz (Los Angeles) home at close to $4.4 million. The traditional-style house was designed by architect Paul Williams, was built in 1934 and has a theater, a detached guest house-office and a landscaped yard with city views, a pool, a koi pond, a patio and a fire pit.

Wyle and Warbin, his wife of almost ten years, separated in late October 2009, according to People magazine. The couple live in separate residences, and both see their two children daily.