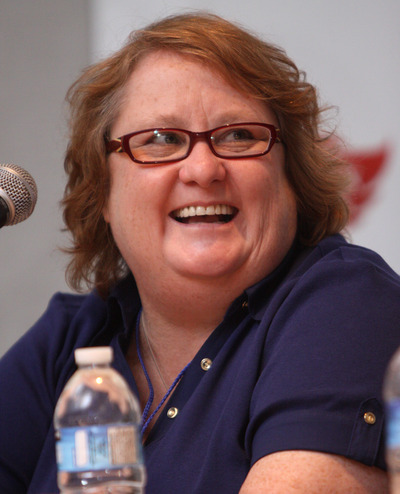 Maile Flanagan ( born May 19, 1965) is an American actress known for her role as the voice for the protagonist ninja Naruto Uzumaki (English version) in Naruto, Principal Perry in Disney XD television series Lab Rats, Geri O'Flanagan in 3Way, and Janet in Yes Man.

Flanagan's name is a Hawaiian word for the green laurel commonly used in leis. She was born in Honolulu, Hawaii . Her father worked for the U.S. military intelligence. When Flanagan was four-and-a-half, the family was stationed in Bangkok, Thailand and when she was ten, they moved to Germany. While in Germany, Flanagan and her family lived in Nuremberg, and Munich.

She graduated from a Department of Defense (DOD) school Munich America High School (MAHS) in 1983. Upon arrival at Boston College (BC), Flanagan stated, "It took me three years to acclimate because I hadn't lived in the States since I was four-and-a-half! I have used some of this in my characters — the wide-eyed wonder."

While attending BC, she was a member of the student comedy troupe My Mother's Fleabag with best friends Nancy Walls Carell, Andrea Beutner Hutchman, Wayne Wilderson and Tom McCarthy.

After graduating in 1987 from "The Heights" (a common nickname for Boston College,) and a brief stint in Washington, D.C., Flanagan moved to Minneapolis and was in the comedy troupe Every Mother's Nightmare with Wayne Wilderson, Tom McCarthy, Andrea Beutner, Peter Civetta and Nancy Walls and others. Minneapolis is where she performed stand-up comedy and theater. In 1996, she moved to her current hometown, Los Angeles, California with the stage production of Bad Seed, which won a LA Weekly Theater Award for Best Comedy Ensemble.

Flanagan is openly lesbian and is married to her partner Lesa Hammett.