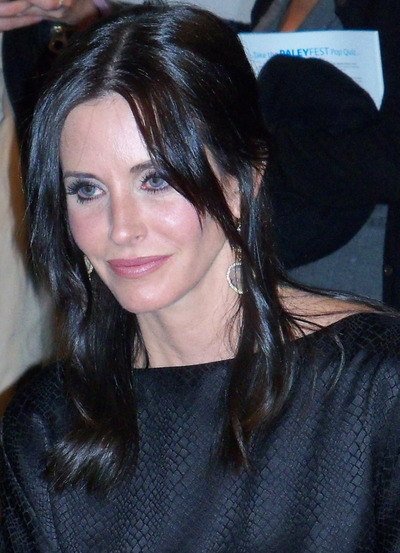 Courteney Bass Cox (born June 15, 1964) is an American actress, producer, and director. She is best known for her roles as Monica Geller on the NBC sitcom Friends, Gale Weathers in the horror series Scream, and as Jules Cobb in the ABC/TBS sitcom Cougar Town, for which she earned her first Golden Globe nomination. Cox also starred in the FX series Dirt. She owns a production company, called Coquette Productions, which was created by herself and then husband David Arquette. Cox has also worked as a director on her sitcom Cougar Town and the television movie Talhotblond.

Courteney Cox was raised in Mountain Brook, Alabama, a suburb of Birmingham, the daughter of businessman Richard Lewis Cox (January 28, 1931 – September 3, 2001) and his wife Courteney (née Bass, later Copeland). She has two older sisters, Virginia and Dottie, and an older brother, Richard, Jr. Her parents divorced in 1974 and her mother then married businessman Hunter Copeland (uncle to music promoter and business manager Ian Copeland). After graduating from Mountain Brook High School, Cox left for Mount Vernon College in Washington, D.C., but did not complete her architecture course, opting instead to pursue a career in modeling and acting.

Cox is of English, Scottish, Welsh, Irish and German ancestry.

Cox appeared in the 1984 music video for Bruce Springsteen's "Dancing in the Dark" as a female pulled onstage to dance with Springsteen. Her early television work includes a starring role in the short-lived television series Misfits of Science (1985), and later a recurring role (1987–89) on the TV series Family Ties as Lauren Miller, the girlfriend of Alex P. Keaton (Michael J. Fox). Her early film roles include Masters of the Universe (1987) and Cocoon: The Return (1988) and I'll Be Home for Christmas (1988). She had a supporting role as Jewel, the hard-as-nails assistant to James Belushi's character, in the 1990 fantasy film Mr. Destiny. In 1994, shortly before the debut of the sitcom, Friends, Cox appeared with Jim Carrey in the film Ace Ventura: Pet Detective and on Seinfeld in "The Wife" episode as Jerry's girlfriend named Meryl. In 1995, she was cast in Toad the Wet Sprocket's music video "Good Intentions". The song is also on the Friends Soundtrack.

Later in 1994 Cox was asked to audition for the part of Rachel Green on a new sitcom, Friends; she was cast as Monica Geller instead. At first the most famous cast member of the new show, Cox joined fellow castmates Jennifer Aniston (Rachel Green), Lisa Kudrow (Phoebe Buffay), Matt LeBlanc (Joey Tribbiani), Matthew Perry (Chandler Bing) and David Schwimmer (Ross Geller) for what would become her most famous role, lasting for 10 seasons until 2004. According to the Guinness Book of World Records (2005), Cox (along with her female costars) became the highest paid TV actress of all time with her $1 million-per-episode paycheck for the final two seasons of Friends.

Between seasons five and six, Cox married David Arquette, and changed her name to Courteney Cox Arquette. An in-joke reference to this is made in the beginning credits of the episode "The One After Vegas", where the rest of the cast and executive producers have "Arquette" added to their names. The dedication "For Courteney and David, who did get married" – a reference to Monica and Chandler's decision not to marry in the episode – appears during the fade out to the tag scene.

Cox's significant previous boyfriends include her step-cousin, the rock promoter Ian Copeland. She also dated Michael Keaton and Adam Duritz of Counting Crows. Cox married actor David Arquette on June 12, 1999. After their daughter, Coco, was born in June 2004, Cox suffered from postpartum depression. Jennifer Aniston is Coco's godmother. On October 11, 2010, it was announced that Cox and Arquette had separated, though they still maintain a close friendship and business relationship. In June 2012, Arquette filed for divorce after nearly two years of separation from Cox. The divorce became final in May 2013.