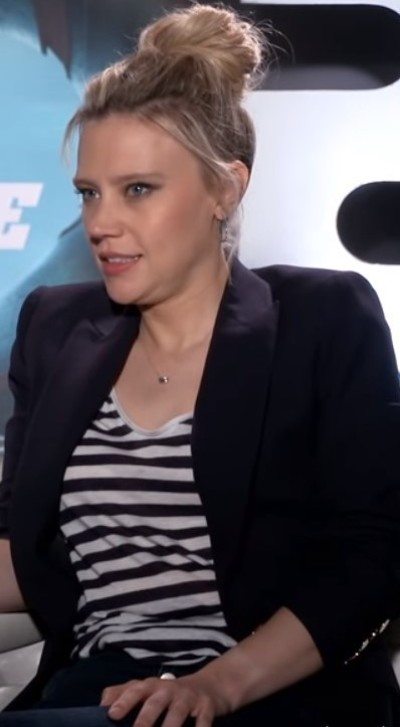 Kathryn McKinnon Berthold (born January 6, 1984) is an American actress, comedian, and musician widely known as a regular cast member on The Big Gay Sketch Show (2007–2010) and Saturday Night Live (2012–present). She is also known for her film roles as Dr. Jillian Holtzmann in the supernatural comedy Ghostbusters (2016), Mary Winetoss in the comedy Office Christmas Party (2016), Pippa in the comedy Rough Night (2017), and Morgan in the action comedy The Spy Who Dumped Me (2018).

McKinnon is known for her character work and celebrity impressions of pop singer Justin Bieber, comedian television host Ellen DeGeneres, and numerous political figures, including Hillary Clinton. She has been nominated for seven Primetime Emmy Awards, including one for Outstanding Original Music and Lyrics and six for Outstanding Supporting Actress in a Comedy Series, winning in 2016 and 2017.

McKinnon was born and raised in the Long Island town of Sea Cliff, New York to Laura Campbell, a parent educator, and Michael Thomas Berthold, an architect. She has a younger sister, Emily Lynne. Her father died when she was 18 years old. She is of German and Scottish descent.

As a child, McKinnon played several instruments. She started playing the piano when she was 5 years old, the cello when she was 12, and taught herself how to play the guitar when she was 15. She graduated from North Shore High School in 2002, and from Columbia University in 2006 with a degree in theatre, where she co-founded a comedy group, Tea Party, which focused on musical improv comedy. At Columbia, she starred in three Varsity shows: V109 "Dial D for Deadline", V110 "Off-Broadway" and V111 "The Sound of Muses". She was also a member of Prangstgrüp, a student comedy group which set up and recorded elaborate college pranks.

In 2007, McKinnon joined the original cast of Logo TV's The Big Gay Sketch Show, where she was a cast member for all three seasons.

Since 2008, she has performed live sketch comedy regularly at the Upright Citizens Brigade Theatre in New York City. She has also worked as a voice-over actress, and has voiced characters for series such as The Venture Bros., Robotomy, and Ugly Americans. In 2009, McKinnon won a Logo NewNowNext Award for Best Rising Comic. She was nominated for an ECNY Emerging Comic Award in 2010. In 2014, she appeared in the Kennedy Center Honors as part of a tribute to Lily Tomlin. In 2016, she starred in the reboot Ghostbusters, alongside Melissa McCarthy, and fellow SNL cast members Kristen Wiig and Leslie Jones. In 2017, McKinnon is attached to star in Amblin Entertainment's Lunch Witch, an adaptation of a young adult graphic novel by Deb Lucke. She has been set to play the title role of Grunhilda, an out-of-work witch who takes a job in a school cafeteria to make ends meet. McKinnon currently voices the character of Ms. Frizzle in the reboot of the Magic School Bus children's series.

McKinnon debuted as a featured player on Saturday Night Live on April 7, 2012. She was promoted to repertory status in season 39 in 2013. Following Vanessa Bayer's departure, McKinnon is now the longest serving female cast member.

McKinnon began appearing as Hillary Clinton on the series leading up to the 2016 presidential election. The real Clinton appeared alongside her in a sketch during the show's season 41 premiere. McKinnon has said that her impression of Hillary Clinton comes from a deep admiration, and that she "unequivocally want[ed] her to win" the 2016 presidential election. On November 12, 2016, which was the first show after Clinton's loss in the election, she reprised the role to open the show with a solo performance of "Hallelujah" by Leonard Cohen, whose death was announced two days before her performance. After the election, McKinnon began to impersonate Kellyanne Conway alongside Alec Baldwin as Donald Trump. On February 11, 2017, she debuted her impression of Elizabeth Warren during Weekend Update and Jeff Sessions in the cold open.

Olya Povlatsky, a Russian woman who voices her opinions on current events, comparing them to the outrageous struggles she faces in her village. She also appeared in a cold open with Beck Bennett as Vladimir Putin reading a prepared statement against her will.
Deenie, a.k.a. "Somebody's Mom", a middle-aged woman who attempts to recap shows she's been watching, but only knows the characters by self-applied nicknames, such as "Big Boobs" and "Mustache". She is always eating some foul concoction out of Tupperware, such as Brussels sprouts and imitation crab, which generally both revolts and breaks up anchor Colin Jost.
Mrs. Santini, an apartment dweller who writes passive-aggressive notes to her neighbors. Originally performed as Effie Villalopolus on Comedy Bang! Bang!
Theresa May, the Prime-Minister of the United Kingdom. In her sketch everybody in town wants to get rid of her. But she is still happy.

Work as a creator

Aside from SNL, McKinnon also co-created and co-stars in the web series Notary Publix with her sister Emily Lynne. In addition to Aidy Bryant (who stars in the series), McKinnon's SNL co-stars Beck Bennett, Jay Pharoah and SNL writer Paula Pell all guest-starred in the six-episode first season of the web series.

In 2015, McKinnon appeared in a number of commercials for the Ford Focus.

McKinnon is the first openly lesbian cast member on SNL, as well as the series' third known LGBT cast member after Terry Sweeney and Danitra Vance. She has a pet cat, Nino Positano, whom she jokingly refers to as her son. She does not use social media, citing fear that she will "misrepresent her true feelings". While attending Columbia University, she dated Bari Weiss.

McKinnon's knack for accents began when she was in fifth grade. She auditioned to be "the queen of reading week" and used a British accent. In an interview with Rolling Stone, she says, "I think the genesis of my entire life, probably, was the smiles I elicited doing this British accent. I've been chasing that dragon ever since." In addition to theater, McKinnon is interested in science. She said to The New York Times, "I've been a big astrophysics nut since I was 12. I have always had a real soft spot for the bizarreness of quantum mechanics."