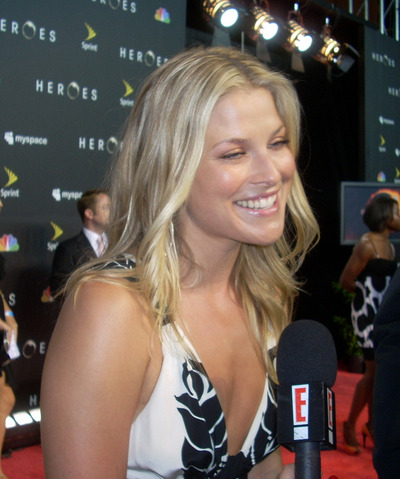 Alison Elizabeth "Ali" Larter (born February 28, 1976) is an American actress. She is perhaps best known for playing the dual roles of Niki Sanders and Tracy Strauss on the NBC science fiction drama Heroes as well as her guest roles on several television shows in the 1990s.

Larter's screen debut came in the 1999 film Varsity Blues, followed by the horror films House on Haunted Hill and Final Destination as Clear Rivers. Major supporting roles in the comedy Legally Blonde and the romantic comedy A Lot Like Love led her to lead roles as the titular character in Marigold and in the 2009 thriller Obsessed. Larter achieved wider fame after her portrayal of video game heroine Claire Redfield in Resident Evil: Extinction and Resident Evil: Afterlife.

Larter's presence in the media is reinforced by her appearances in lists compiled by Maxim, FHM and Stuff as well as People magazine's "Best Dressed List" in 2007. After a three-year-long relationship with actor Hayes MacArthur, the two married in August 2009 and have a son, Theodore Hayes MacArthur, born December 2010.

Born in Cherry Hill, New Jersey, Larter is the daughter of Margaret, a realtor, and Danforth Larter, a trucking executive. She attended Carusi Middle School and later graduated from Cherry Hill High School West during her time as a model,  but she didn't finish senior year of high school because of modelling. Her mom accompanied her everywhere until she turned 18. Her parents have since moved to Allentown, Pennsylvania.

Larter said she was a tomboy until she turned 13. Suddenly she sprouted six inches, gained weight and significant curves. The next year she was signed by the Ford modelling agency. Larter began her modelling career at the age of 14 when a modelling scout discovered her on the street and was asked to star in a Phillies commercial, this led to a modeling contract with the prestigious Ford Modeling Agency in New York. Larter subsequently skipped her senior year to model in Australia, Italy, and Japan, the latter a country she would temporarily settle in at the age of seventeen.

While modelling in Italy, Larter met fellow model and aspiring actress Amy Smart and the two "became instant friends", according to Larter. A modelling job later took her to Los Angeles, whilst there, she decided to take acting classes with Smart. The two then moved into an apartment together. In November 1996, Larter portrayed fictional model Allegra Coleman in an Esquire magazine hoax. When speaking about the cover and her subsequent fame, Larter said, "When the door opens for you in Hollywood, you need to run with it. You know?" Larter is currently signed to IMG Models.

Larter landed her first professional acting roles in 1997 when she appeared in several television programs. She appeared in an episode of the Brooke Shields television series Suddenly Susan, and the short-lived series Chicago Sons. These roles were followed by a number of other appearances on Dawson's Creek, Chicago Hope, and Just Shoot Me!

In 1999, Larter began her film career with an appearance in Varsity Blues, which re-united her with Dawson's Creek star Van Der Beek and close friend Amy Smart. Smart had persuaded Larter to audition for the movie, in which she played Darcy Sears, a love interest for one of the main characters.Varsity Blues drew a domestic box office gross of $53 million. That year she made appearances in the teen comedies Giving It Up and Drive Me Crazy. Larter also starred in the horror remake House on Haunted Hill which was made for around $20 million. The movie was panned by critics, but grossed $15 million on its opening weekend and went on to earn over $40 million overall.

In 2000, Larter starred as one of the main characters, Clear Rivers, in the teen supernatural horror film Final Destination. Also starring Devon Sawa and Kerr Smith, the movie's premise followed several teenagers who survive a plane crash but are stalked and killed by death itself. Final Destination made $112 million by the end of its theatrical run.

Larter first appeared in the media when she portrayed the fictional character of Allegra Coleman on the November 1996 issue of Esquire. The magazine, which billed Coleman as the movies' next dream girl, told of Allegra's relationship with David Schwimmer, how Quentin Tarantino broke up with Mira Sorvino to date her, and how Woody Allen overhauled a film to give her a starring role. When the magazine was published, Esquire received hundreds of phone calls about the non-existent Coleman and various talent agencies sought to represent her, even after the hoax was revealed. Larter herself received a considerable amount of attention after the cover; she received phone calls from morning TV shows and others for interviews. The Esquire cover led Larter to a role on Varsity Blues. One particular scene where Larter's character, Darcy Sears, wears nothing but whipped cream to cover herself has become a media favorite. It has been referenced a number of times in the media including on MTV's Jersey Shore where one character refers to it as the "Varsity Blues outfit". The scene also made Maxim '​s list of Earth-Shattering Nude Scenes at #9.

In December 2007, Larter and her then longtime boyfriend, Hayes MacArthur, were engaged to marry. They had met on the set of National Lampoon's Homo Erectus. In a 2007 interview with Cosmo, Larter said "I told my boyfriend after three weeks that I wanted to marry him and that we could do it tomorrow". On August 1, 2009, Larter married MacArthur in an intimate outdoor ceremony which took place at MacArthur's parent's estate in Kennebunkport, Maine. During the ceremony, guests arrived via trolleys to the sounds of Irish music playing in honor of MacArthur's heritage, among the invited was Larter's close friend Amy Smart. The couple later purchased a three story home in the Hollywood Hills for $2.9 million. On July 20, 2010, Larter announced that she and MacArthur were expecting their first child and later, on the September 10 episode of Late Night with Jimmy Fallon, announced that she was expecting a boy. Larter admitted that she and MacArthur left the country for Europe in an effort to hide the news of the pregnancy. Larter gave birth to the couple's son, Theodore Hayes MacArthur, on December 20, 2010. In August 2014, Larter confirmed that she and MacArthur were expecting their second child that winter.