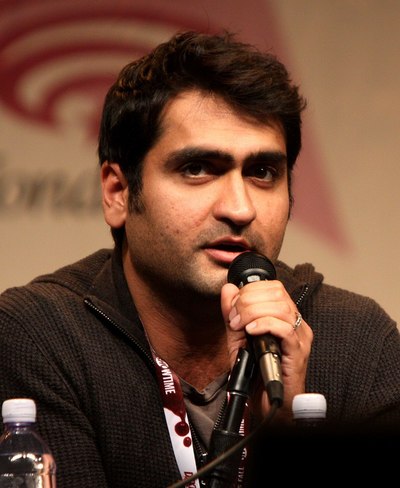 Kumail Nanjiani (Sindhi: كُميل ننجیاني‎; born February 21, 1978) is a Pakistani-American stand-up comedian, actor, writer, and podcast host. Nanjiani is best known for being a main cast member on HBO's Emmy Award-nominated series Silicon Valley, as well as for providing the voice of Prismo on the Emmy Award-winning animated series Adventure Time. He starred on the TNT series Franklin & Bash and the Adult Swim series Newsreaders. Nanjiani also co-hosted the Comedy Central show The Meltdown with Jonah and Kumail. In addition to his television and film work, he hosted two podcasts: The Indoor Kids and The X-Files Files.

In 2017, Nanjiani starred in the semi-autobiographical romantic comedy film The Big Sick, which he wrote with his wife Emily V. Gordon. They were nominated for the Academy Award for Best Original Screenplay at the 90th Academy Awards.

Nanjiani was born in Karachi, Pakistan, the son of Shabana and Aijaz Nanjiani. He was raised as a Shia Muslim, but now identifies as an atheist. The Scottish radio presenter Shereen Nanjiani is his second cousin.

During his childhood, Nanjiani lived in Karachi and attended Karachi Grammar School. At 18, he moved to the United States and attended Grinnell College in Iowa, from which he graduated in 2001. He completed a double major in computer science and philosophy.

In July 2011, he and X-Play staffer Ali Baker began hosting a video game-themed podcast, titled The Indoor Kids. In late August of the same year Baker left the show and Nanjiani began hosting with his wife, Emily V. Gordon. Until other commitments took over, he appeared regularly on Dan Harmon's podcast Harmontown, where he played Dungeons & Dragons with Harmon as a character named Chris de Burgh. He played a delivery man in the 2013 film, The Kings of Summer. In addition to guest-starring in various comedy shows like Portlandia, Nanjiani was featured in a supporting role in the TNT series Franklin & Bash. He played the role of Pindar Singh, an agoraphobic science fiction nerd working for the title characters.

Nanjiani guest-starred on HBO's Veep as a statistician. He had a recurring role of Amir Larussa on Newsreaders, as well as Prismo on Adventure Time. His Comedy Central special titled Beta Male aired in July 2013. In late June 2013, Comedy Central announced the pickup of a show The Meltdown with Jonah and Kumail hosted by Jonah Ray and Nanjiani. The show, featuring Nerd Melt comedy regulars and various comedians, began airing in July 2014. In April 2014, he began playing the character Dinesh in the HBO sitcom Silicon Valley. He voiced Reggie in the video game The Walking Dead: Season Two. In July 2014, Nanjiani hosted a weekly podcast titled The X-Files Files, dedicated to discussion and fond reminiscences about The X-Files. Each episode features him and a guest, including former The X-Files writers, producers, actors and directors, in light-hearted banter about one or two episodes of the series. On July 30, 2014, Nanjiani appeared on Ken Reid's TV Guidance Counselor Podcast.

In 2015, Nanjiani guest-starred in an episode of Broad City called "In Heat". Starting on March 22, 2015 he provided his voice for the character of Mshak Moradi in the Hunt the Truth audio drama, part of the marketing campaign for Halo 5: Guardians. On May 5, 2015, he appeared on Inside Amy Schumer in the episode "12 Angry Men Inside Amy Schumer", a parody of 12 Angry Men, as one of the members of the jury. In July 2015, Nanjiani provided guest voices on Aqua Teen Hunger Force and Penn Zero: Part-Time Hero. In November 2015, he starred in an Old Navy TV commercial together with Julia Louis-Dreyfus and Snoop Dogg. In April 2016, he starred in another Old Navy advertisement with SNL cast members Jay Pharoah, Cecily Strong, and Nasim Pedrad.

In 2017, Nanjiani starred in the romantic comedy film The Big Sick, which he wrote with his wife Emily V. Gordon. The film is about their relationship, with Nanjiani playing himself and Zoe Kazan playing Gordon (renamed Emily Gardner).

Nanjiani and his wife will appear as guest judges on Season 10 of Rupaul's Drag Race.

Nanjiani has been married to Emily V. Gordon, an author, comedy producer, and former couples and family therapist since 2007. Gordon was the booker and producer of The Meltdown with Jonah and Kumail (2014–2016).