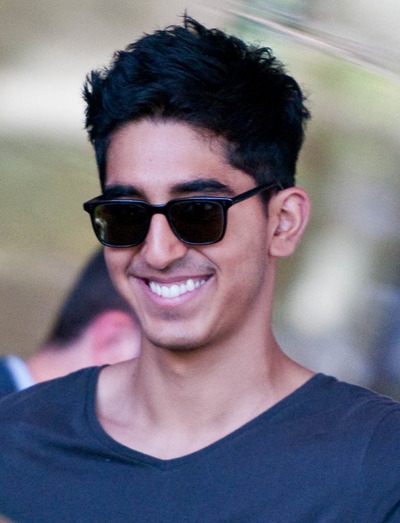 Dev Patel (born 23 April 1990) is a British actor, best known for playing Jamal Malik in Danny Boyle's Slumdog Millionaire (2008), for which he won a number of awards, including a Critics' Choice Award and a Screen Actors Guild Award. Patel is also known for his role as Anwar Kharral in Skins; as Sonny Kapoor in The Best Exotic Marigold Hotel; and as Neal Sampat in Aaron Sorkin's HBO show The Newsroom.

Dev Patel was born in Harrow, London. His mother, Anita, is a caregiver, and his father, Raj, an IT consultant. His parents are Gujarati Hindu Indians. Both of them were born in Nairobi, Kenya, where there is a significant Indian community; they emigrated to Britain separately in their teens, but only met first in London. Patel was raised in the Hindu faith.

Patel grew up in Rayners Lane, Harrow, and attended Longfield Middle School. He had his first acting role as Sir Andrew Aguecheek in the school's production of Twelfth Night. Patel was given the Best Actor award for his performance. He later attended Whitmore High School, receiving an A* in GCSE Drama, for his "self-penned portrayal of a child in the Beslan school siege". His drama teacher Niamh Wright has stated: "Dev was a gifted student who quickly impressed me with his innate ability to communicate a wide variety of characters imaginatively and creatively. He was awarded full marks for his GCSE performance to a live audience and the visiting examiner was moved to tears by his honest portrayal". He completed his AS Levels in PE, Biology, History and Drama in 2007, while he was working in Skins at Whitmore High School.

Patel began his acting career when he auditioned for the E4 teen drama television series Skins. Patel's mother saw the casting ad in a newspaper and took him to the audition even though he had a science exam the next day. After two auditions, he was cast in the role of Anwar Kharral, a British Pakistani Muslim teenager. The characterisation of Anwar was partly based on Patel's personality and the role was written specifically for him after he was cast in Skins. Patel, who had no professional acting experience, said that on "the first day of shooting I didn't really know what to do." The first series of the show aired in January 2007 and went on to win the Rose d'Or for Drama in 2008 and receive a nomination for Best Drama Series at the 2008 BAFTA Television Awards. Patel reprised his role as Anwar for the second series of Skins, which aired in February 2008. The second series of Skins won the Philips Audience Award at the 2009 BAFTA Television Awards.

Patel made his feature film debut when he was cast in the role of Jamal Malik, the central character in Danny Boyle's film Slumdog Millionaire. The character Jamal Malik is an Indian Muslim boy born and brought up in the poverty of Bombay, India. Boyle considered hundreds of young male actors, but found that Bollywood leads were generally "strong, handsome hero-types", not the personality he was looking for. Boyle's 17-year-old daughter Caitlin pointed him to Skins. After five auditions for the role, the actor was eventually cast in August 2007. The film's producer found the original choice for the lead role, Ruslaan Mumtaz, too good looking for the role. Boyle said, "I wanted a guy who didn't look like a potential hero; I wanted him to earn that in the film." To prepare for the role, Patel went along with Boyle while scouting for filming locations, where he was able to observe the Dharavi slums for himself. He also worked at a call centre for a day and in a hotel, where he washed dishes.

After the release of Slumdog Millionaire at the end of 2008, Patel went on to receive a number of awards for his performance, including a British Independent Film Award, National Board of Review (NBR) Award, Chicago Film Critics Association Award, and two Black Reel Awards for Best Actor and Best Breakthrough Performance. Patel was also nominated for Best Supporting Actor at the 2009 Screen Actors Guild (SAG) Awards. The award eventually went posthumously to Heath Ledger for his performance in The Dark Knight, though Patel did win the Screen Actors Guild Award for Outstanding Performance by a Cast in a Motion Picture, which he shared with ten other cast members from Slumdog Millionaire. On 8 January 2009, Patel won the Critics' Choice Award for Best Young Performer. He was also nominated for two London Critics Circle Film Awards, the NAACP Image Award for Outstanding Supporting Actor, the 2009 BAFTA Award for Best Leading Actor, and European Film Award for Best Actor. The film itself won four Golden Globes, including Best Drama Film, and eight Academy Awards, including Best Picture.

He began dating his Slumdog Millionaire co-star Freida Pinto in 2009. On December 10, 2014, the couple announced that they had split after nearly six years of dating.