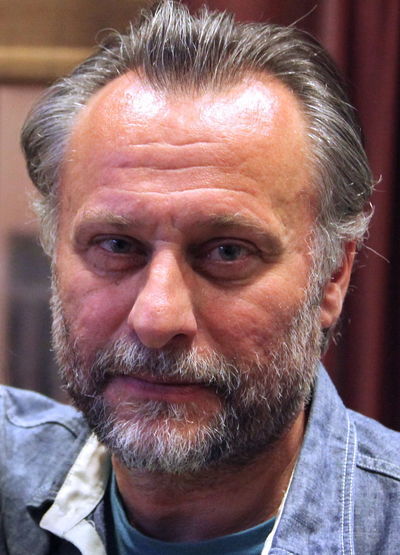 Rolf Åke Mikael Nyqvist (born 8 November 1960) is a Swedish actor. Educated at the School of Drama in Malmö, he became well known from his role as police officer Banck in the first series of Beck films made in 1997. He is most recognized internationally for his role in the acclaimed Millennium series as Mikael Blomkvist, as well as the lead villain in Mission: Impossible – Ghost Protocol (as Kurt Hendricks) and John Wick (as Viggo Tarasov).

Nyqvist was born in Stockholm, to a Swedish mother and an Italian father (from Florence). As a baby, he was adopted from an orphanage. At 17, he spent a year as an exchange student in Omaha, Nebraska. He took his first acting classes there, as a senior in high school playing, amongst other things, a small part in the drama Death of a Salesman by Arthur Miller. When he returned to Sweden, he was accepted at ballet school, but after one year, gave it up. An ex-girlfriend suggested he try theatre, instead, and at 24 he was accepted to the Malmö Theatre Academy. After graduating, Nyqvist worked mainly in theatre, but also landed smaller parts in several different film productions.

Nyqvist's first big breakthrough came in 2000 with the film Together directed by Lukas Moodysson. The movie was set in the 1970s and followed the antics of life in a suburban commune in Stockholm. The movie achieved great international success and earned Nyqvist his first Guldbagge Best Actor nomination for his role as a misguided husband with anger issues. He later played the leading man in the Swedish romantic comedy, The Guy in the Grave Next Door directed by Kjell Sundvall. The film is based on the novel of the same name written by Katarina Mazetti. The film explored the difficulties that arise between a country farmer and a city librarian, highlighting the differences between blue-collar laborers and white-collar administrators. Nyqvist won a Guldbagge Best Actor award for his role as the farmer, Benny.

In 2004, he played the lead role as Daniel Daréus, a conductor and musician, in the Academy Award-nominated Best Foreign Film As It Is in Heaven, directed by Kay Pollak. It is one of the most-watched Swedish films, and the role highlighted Nyqvist's ability to display tenderness and vulnerability at the same time as rage and fear. In 2006, he starred in Suddenly directed by Johan Brisinger. In Suddenly, Nyqvist plays Lasse – a man who must come to terms with the sudden loss of his wife and son. In 2007, Nyqvist portrayed Swedish ambassador Harald Edelstam, in The Black Pimpernel, a hero who saved several people from execution in Chile during and after the military coupe in September 1973.

He has garnered recent international attention starring as Mikael Blomkvist in The Girl with the Dragon Tattoo (Swedish title: Män som hatar kvinnor), The Girl Who Played with Fire (Swedish title: Flickan som lekte med elden), and The Girl Who Kicked the Hornets' Nest (Swedish title: Luftslottet som sprängdes) of Stieg Larsson's Millennium series. Although Nyqvist always was high on the list of potential actors to portray Blomkvist, his charisma got him the role. The director of The Girl with the Dragon Tattoo, Niels Arden Oplev, found what he was looking for in Nyqvist – someone with the right looks, charm, and likeability.

Nyqvist has described his childhood and quest to find his biological parents, subsequently in his adult life, in his autobiographical novel, Just After Dreaming (Swedish title: När barnet lagt sig). He is married to scenographer Catharina Ehrnrooth and has two children, Ellen and Arthur.